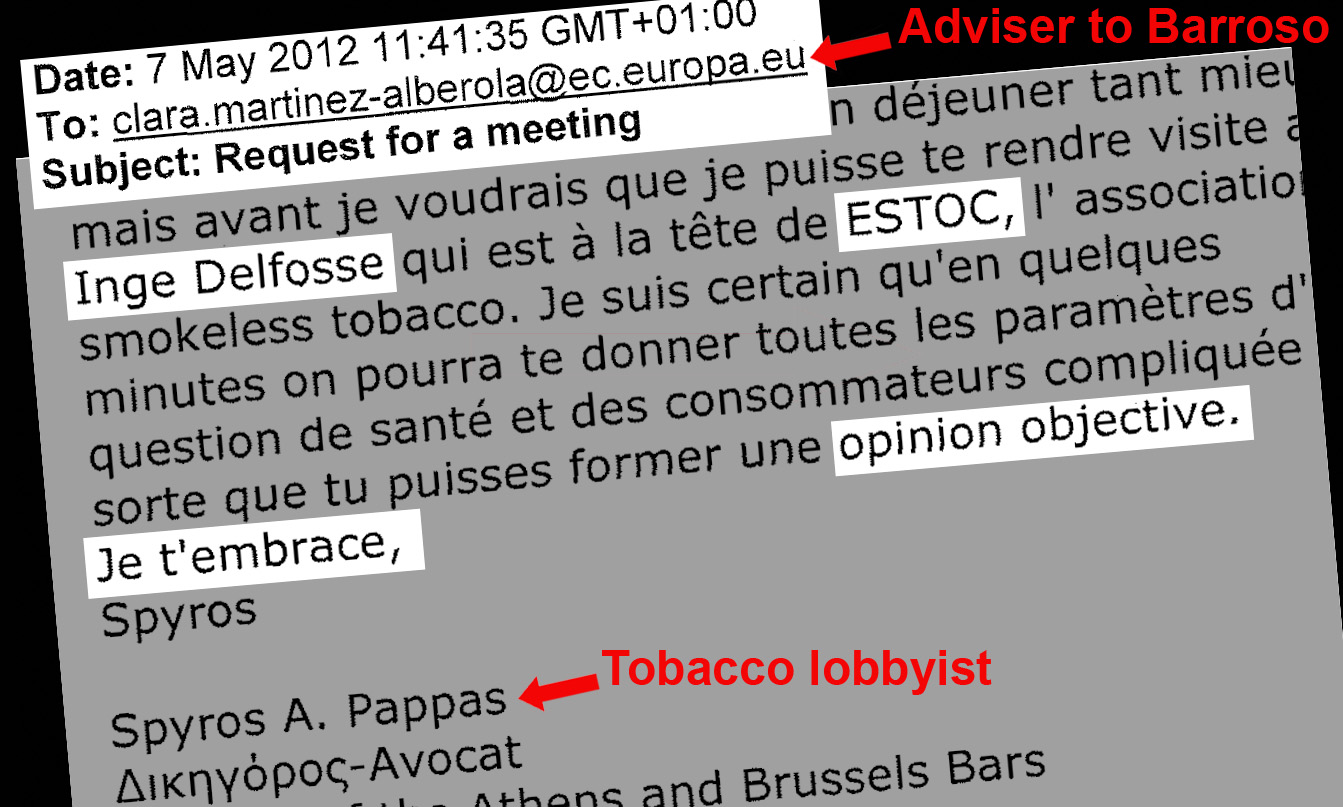 The Commission’s shabby implementation of UN rules for tobacco lobbying

If Health Commissioner John Dalli had to resign because of undisclosed meetings with tobacco lobbyists, shouldn’t the same logic apply to high-level Commission officials in Barroso’s cabinet, at the Secretariat-General and other DGs?

Almost two months after Commissioner John Dalli resigned, it is still not clear what exactly happened in this tobacco lobby scandal. MEPs are furious with the Commission about the secrecy around his resignation and have submitted no less than 154 questions about the scandal. The Commission’s response, yet again, failed to clarify the basic facts about the Dalli lobby scandal.1

Commission officials have told Brussels journalists that Dalli had to resign because he held undisclosed meetings with tobacco lobbyists. European Voice referred to sources who said that "the infraction for which Dalli was made to resign hinges on an article in the World Health Organisation’s Framework Convention on Tobacco Control, to which the EU is a signatory."2

A breach of the WHO convention was also mentioned by OLAF’s Director General Giovanni Kessler during a meeting with a group of MEPs. Kessler said Dalli had acted against the spirit of the Commissioners’ Code of Conduct and the Framework Convention of Tobacco Control, “which Mr Dalli was well aware of.”3 The EU is one of 174 signatories to the UN’s tobacco control treaty, which was adopted in May 2003 and entered into force in February 2005.4

The guidelines also require the Commission to inform all its branches and the public about “the addictive and harmful nature of tobacco products”, the “strategies and tactics used by the tobacco industry to interfere with the setting and implementation of public health policies”, and to “raise awareness about the tobacco industry’s practice of using individuals, front groups and affiliated organizations to act, openly or covertly, on their behalf.”

DG SANCO appears to have done most to implement the UN rules. Their website includes lists of meetings at which the Commissioner and Commission officials met with tobacco lobbyists, as well as official minutes from these meetings. Ten meetings over the last 12 months are listed.7

A spokesperson from DG SANCO told Corporate Europe Observatory: “Our policy is indeed to publish minutes of our meetings with the tobacco industry, its upstream suppliers and downstream distributors, at least since autumn 2011.”

CEO research, however, shows that the list is not complete: there are other meetings between DG SANCO officials and tobacco lobbyists that are missing from the list. On the basis of our analysis of documents received under EU FOI legislation we have found at least three such meetings.

No implementation of WHO rules outside DG SANCO

Still, DG SANCO obviously deserves recognition for having started to disclose meetings with tobacco lobbyists online. But the rest of the European Commission seems to simply ignore the WHO rules. The DG SANCO spokesperson commented “We have no precise knowledge to which extent other Commission services follow the same practice.” CEO has looked at other DGs and concluded DG SANCO was the only one which showed any signs of implementing a transparency policy.

Other Commission departments that meet with tobacco lobbyists fail to disclose this, in clear violation with the WHO convention. CEO found that Commission President Jose Manuel Barroso’s own cabinet and his department’s Secretariat-General has had several undisclosed meetings with tobacco industry lobbyists. Our analysis of documents released under EU FOI legislation revealed again at least five such meetings took place.

If Dalli had to resign because of undisclosed meetings with tobacco lobbyists, the same logic should also apply to other members of Barroso’s cabinet and to high-level Commission officials at the Secretariat-General and other DGs.

The Commission’s casual approach to the WHO Convention is reflected in the fact that there is no document anywhere on the Commission’s website outlining how it intends to implement the WHO rules. A DG SANCO spokesperson argued: “In fact, we do not need a Commission internal document how to implement Art. 5(3) because – read together with its guidelines – Art. 5(3) is self-explanatory.”

The guidelines are clearly worded, but the truth is that the Commission is simply not implementing them, as evidenced above. Also, the WHO guidelines go far beyond listing of meetings.

CEO has identified a number of other ways in which the Commission fails to live up to its UN obligations:

The guidelines say officials must “avoid the creation of any perception of a real or potential partnership or cooperation” and avoid any preferential treatment of the industry. Yet lobby consultancy Luther Pendragon not only lobbies for tobacco industry clients against the EU adoption of plain packaging rules for cigarettes,16 it also has contracts with the European Commission and lists the Commission as a client on its website.17

The WHO guidelines state that the Commission should develop clear policies to prevent health officials going through the revolving door into tobacco industry jobs. The Commission lacks such rules and in 2004 allowed then Health Commissioner Pavel Telička to set up BXL Consulting, a lobby consultancy firm that in 2006 and 2007 worked for British American Tobacco (BAT).18 To properly implement the WHO rules, the Commission should adapt its Code of Conduct for Commissioners (and the Staff Regulations) to include a ban on ex-Commissioners and former officials taking up employment with or on behalf of the tobacco industry.

4. Rules to map the tobacco industry

The guidelines call for “rules for the disclosure or registration of the tobacco industry entities, affiliated organisations and individuals acting on their behalf, including lobbyists”. This seems at odds with the Commission’s continued insistence on the lobby transparency register remaining voluntary. Registration must be obligatory, at least for tobacco lobbyists. A number of tobacco lobbies are currently not registered, including the Germany-based tobacco company Reemtsma, the Electronic Cigarette Industry Trade Association (ECITA), lobby consultancy Bell Pottinger (lobbying for Imperial Tobacco)21 and lobbying law firm Clifford Chance (lobbying for Philip Morris).22

The conclusion is surely clear. If Dalli’s resignation is based on a violation of the WHO rules, then numerous high-level Commission officials should also resign. The Commission has not fully implemented the WHO guidelines despite obligations to do so. Health NGO coalition EPHA has asked Commissioner Tonio Borg to commit not to meet with tobacco lobbyists. That would be an important first step.

But the WHO guidelines require changes for all Commissioners and all Commission departments. The implementation of the guidelines would require a separate code for relations with tobacco lobbyists, as well as changes to the Code of Conduct for Commissioners, Staff Regulations and the Transparency Register.

They should just regulate it and tax the product rather than ban it altogether. At the moment it just seems like a propaganda to push people away from this devices so taxes can still be made from normal tobacco!