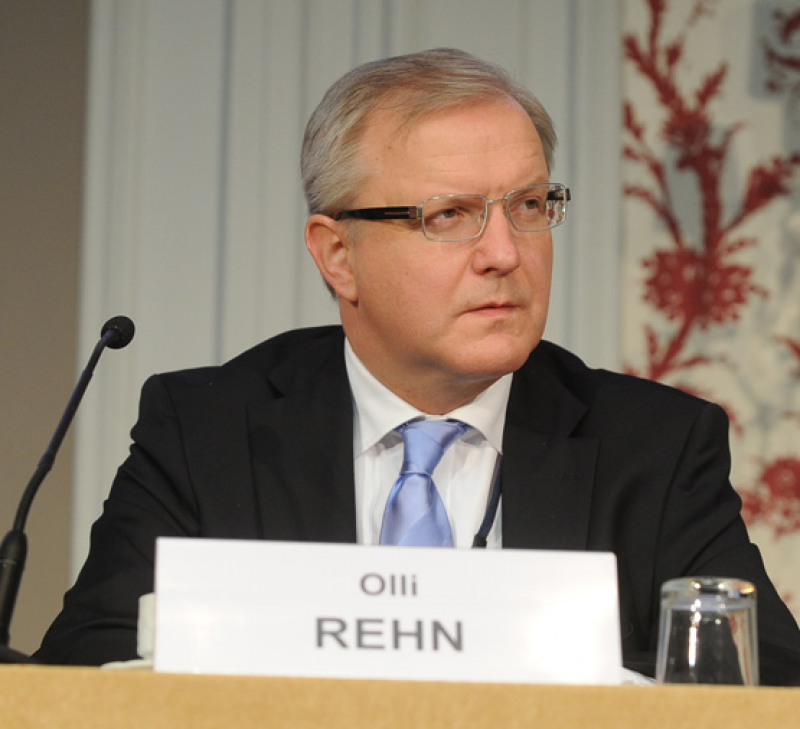 The dangers of the Two-pack

The Commission is lashing out towards member states, such as Belgium, that haven't followed the desired course sufficiently. With the "two-pack" it will be easier to force them. They usher in stronger EU control of national budgets, a new type of adjustment programmes, and a consolidation of the Troika approach to indebted member states.

In February, EU Commissioner Olli Rehn warned Belgium that it should stick to its budget deficit goal of 2.15% of GDP for 2013, after having missed its 2012 target of 2.8%. Around the same time, the negotiations between the European Parliament and the Council on two new regulations on stronger budgetary surveillance in the euro area were concluded. When the Parliament votes on the result on Tuesday the 12th of March, the hand of the Commission will be strengthened in imposing austerity measures. As Rehn commented, the adoption of the so-called two-pack was a first big step towards the “Deep and Genuine Economic and Monetary Union” that Rehn and Barroso are envisioning.

Rehn’s attack on the Belgian government was unusually blunt and open. The Finnish conservative ex-minister is clearly unsatisfied with the budgetary performance of the host country of most EU institutions – he wants action, and not just any action. Only four years ago, such a warning from a Commissioner would be serious, but not particularly frightening for a government. But that was a different European Union.  A wave of reforms have strengthened the hand of the Commission, and some say Belgium could be the first country to be subject to sanction under the new rules1 [1] . But the Commission would like to be able to do more than just fine a government that has not met its budget deficit target. It wants the power to be able to tell a government how that target should be reached. Conveniently, the EU recently adopted some of the instruments Rehn will be able to use in the future to have it his way.

Rehn is not happy with the speed of reform in Belgium.  It’s not that austerity measures have not been imposed. They have. Recently wages were frozen – in a country where workers are used to seeing their wages automatically adjusted to the consumer price index.  The decision to freeze wages brought tens of thousands of workers onto the streets. But at least the system has not been abandoned yet – much to the regret of Rehn who first recommended getting rid of the automatic correction of wages to the rate of inflation back in 2011. Two years on, Rehn is again calling for “measures of a structural nature”.

Even so, Rehn is not naming and shaming the Dutch government, quite the contrary. The contrast between the approach to the two countries is telling, and the explanation is quite straightforward: the Dutch government has by and large followed the advice of the Commission and implemented a series of harsh reforms. And it has been fully supportive of the hawkish line of the Commission and Germany all along. This has given it a high standing with both the German government and the Commission. However, despite the ‘reforms’ the Dutch deficit has only increased.

This begs the question what the Commission's most important priority is at the moment. It seems the ability to push member state governments to adopt a particular set of reforms ranks higher than fighting the deficits themselves. It becomes more and more clear that austerity is not just about budget deficits but is seen as an opportunity to impose neoliberal structural reforms – in effect attack the welfare state.

Over the past three years, several EU laws have been passed that strengthen the Commission’s hand in shaping member states' economic policies, including their budgets. They give the Commission and the Council expanded options to push countries in a particular direction. And the Commission is coming out as the big winner. For instance, if the Commission recommends fining a member state for its deficits, it can only be stopped if a qualified majority in the Council opposes the measure. However, while they can issue recommendations on member state budgets, there are still limits to what they can demand. They can ask for wage reductions (in practice a demand) and for a policy to support “competitiveness”, but direct demands to change particular labour laws remain difficult to impose.

But proposals to remove these limits to the Commission’s power have been discussed for a while now, and they became more concrete with the Commission’s blueprint for a stronger Economic and Monetary Union, released last November , which envisages a number of steps towards those objectives.

The first regulation is mainly a consolidation of the Troika's approach to countries that have been forced to take loans. This approach transfers tremendous power to the Commission – in many ways at the expense of the Council – and gives the Commission substantial power to force reforms on these countries. Under these rules, member states that take big loans are obliged to implement an adjustment programme agreed on by the Commission, the European Central Bank and, if relevant, the International Monetary Fund.  While this regulation mainly legalises and consolidates what is already done in Greece and the other countries under the dictate of the Troika, two points are particularly significant.

First, the regulation does not clearly prevent the Commission from interfering in member states' labour laws and wage-setting procedures in this framework. This is noteworthy because such interference, which is standard in the Troika's existing adjustment programmes, could represent a violation of the European Treaty.  Second, in the same article under point 6 the regulation asks member states subject to such a programmes to seek “technical assistance from the Commission” in the case of “insufficient administrative capacity”. This is also not entirely new as the presence of a task force in Greece shows, but it underlines the Commission’s ambition to expand its power directly within the member states. Also, it enables the Commission to subject a country to “enhanced surveillance”, even if it’s not in breach of the key 3 per cent deficit threshold.

The second regulation  - mainly on budgets - in the two-pack is also groundbreaking. It will weaken national parliaments’ ability to decide on their fiscal policy and will change the way budgets are created. Its most far reaching elements concern member states in the “excessive deficit procedure” – countries in breach of rules on deficits – but at the moment a full 19 member states are subjected to the procedure, out of which 11 are eurozone members.  In other words, being under the excessive deficit procedure is the order of the day for most, not an exceptional circumstance.

The budget regulation gives the Commission ample powers to set requirements for the budgets. The Commission has embarked on a campaign to enable it to change the procedure with which member state budgets and economic policies are dealt with. At the moment, the Commission can issue recommendations on, for example labour laws and budgets, and do so with great enthusiasm, in most cases with the backing of the Council. In the course of the debate on the strengthening of the Economic and Monetary Union in 2012, both the Commission and the presidents of the European Council, the European Central Bank and the Eurogroup, proposed making the recommendations mandatory, which is a big step towards a common budgetary policy, a fiscal union and a common economic policy.

In effect, this is a move towards a system of preapproval of budgets by the Commission and the Council, in that it obliges member states to present a draft budgetary plan in October “which shall be consistent with the recommendations issued" under the European Semester. Until now, member states would receive these recommendations in response to draft budgets submitted in April. Now, there will be a second phase to pressure member states to follow the recommendations. This could further change the way a budget is agreed upon. Instead of a democratic decision by an elected parliament on which direction the country should take, the government and its bureaucracy will have to pay particular attention to the requirements set by the Commission and the Council.

First, it enables the Commission to step in and check the draft budgets of member states in their final phase, shortly before they are to come into force. Here, the Commission can complain if it doesn’t see commitment to the reforms preferred. If the government in question doesn’t follow recommendations, there are two consequences:

- A failure to follow recommendations will weigh on a decision of the Commission and the Council to put the country under ‘the excessive deficit procedure’, a new and an alarming tool to discipline countries into rapid, comprehensive austerity measures and “structural reforms”. Alarming because the procedure has been speeded up, made semi-automatic, and because it can lead to bigger sanctions than previously.

- Also, failure can influence the decision of the Commission to impose sanctions if the country is in breach of its obligations to keep the deficit below 3 per cent of GDP.

The budget regulation strengthens the excessive deficit procedure in another way that is equally important, if not more so. This is because it introduces the “Economic Partnership Programmes”, to be drafted by a member state government once it’s been established that an “excessive deficit” exists. You could ask why that is needed, in that the existing rules already oblige a member state government to present a plan on how they will bring their house in order, and give the Commission and the Council the power to oversee them. The difference seems to be that the partnership programmes stress emphatically that the road to salvation has to go through neoliberal “structural reforms” and measures that addresses “structural weaknesses”. As the case of Belgium and the Netherlands shows, the Commission’s agenda is as much about structural reform as it is about budget deficits.

In short, the two-pack is to be a tool that enables the Commission to exert bigger influence on member states' economic policies. As the key tool in surveillance of member states policies, it enables the Commission to set the agenda for a particular reform course, and for the Council to enact greater influence into matters EU institutions hitherto found it hard to affect. For them, a number of “structural reforms” have to be implemented as soon as possible, and the EU institutions should use all available powers to push member states to adopt them. They include weakening of labour protection laws and social expenditure of different sorts.

The end goal is a fully fledged fiscal union and a common economic policy in which the Commission and the Council has the power to veto member state budgets and impose particular reforms, e.g. via “contracts” on economic policy between the member states and the Commission. In the end, this will require changes to the EU Treaties. Before that happens, the Commission has stated clearly that it will take it as far as they can within the limits of the Treaty in force - and the two regulations are to be used to their maximum. That has been made abundantly clear by the Commission itself, and by the Council, during the debate on the next steps. For Belgium, this could mean that the abolition of wage indexation could soon re-emerge again under the new rules with little leeway for debate or dissent.