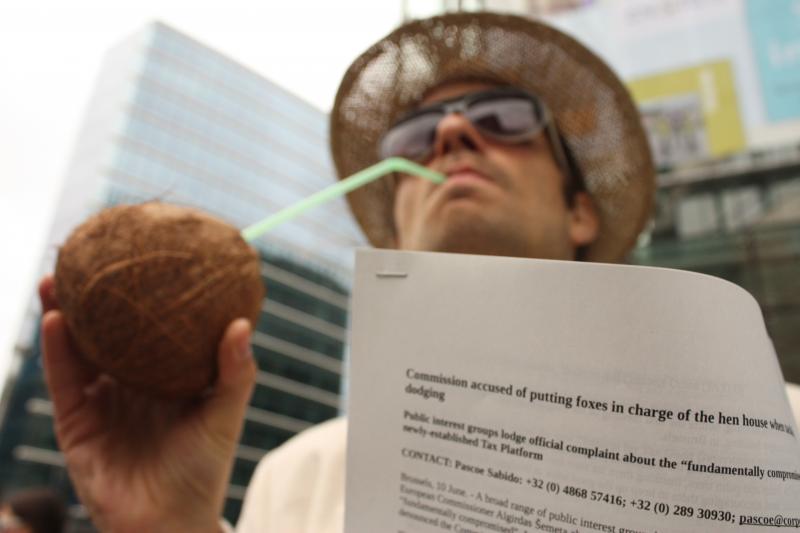 Letter to Commissioner Šemeta on the Tax Good Governance Platform

Re: Conflicts of interest within the new Platform for Tax Good Governance undermines the Commission's efforts to tackle tax evasion and avoidance

We are writing to you as concerned civil society organisations having recently seen the composition of your new Platform for Tax Good Governance ('Platform').

We appreciate the efforts of DG TAXUD in tackling tax evasion and avoidance, which could save the European Union EUR 1 trillion every year. This sum is higher than the total health care budgets of all members combined, and if recouped, could pay off Europe's public deficit in less than nine years.1

However, the Platform, key in helping the Commission tackle tax havens and aggressive tax planning, appears to be fundamentally compromised. It is dominated by the same stakeholders who have been so effective in evading and avoiding tax, as well as those who have successfully invented new ways for their clients to do so.

The Commission is essentially inviting the foxes to guard the hen house.

The employers associations in the Platform, such as BusinessEurope or the Federation of German Industries (BDI), have consistently argued for lower corporate taxes as a way of tackling tax evasion,2 while the American Chamber of Commerce successfully lobbied Ireland to weaken its tax code, allowing loyalty payments for intellectual property to be funnelled offshore.3 Meanwhile the tax advisers in the Platform all represent the Big 4 accountancy firms who are directly involved in channelling profits through tax havens,4 and many of their senior management previously held or currently still hold posts there.5

Of further concern, despite the claim in the call for application of a “need to strike a balance between the organisations to be appointed”,6 many organisations represent the same interests. For example, alongside the International Chamber of Commerce is its member the American Chamber of Commerce. Likewise, the employers association Business Europe is joined by its German and French members, BDI and Medef respectively. Conversely, while there are five closely linked employers associations, there is only one trade union (EPSU).

Among the associations of private firms engaged in tax avoidance, Confédération Fiscale Européenne (CFE) is joined by its Dutch member, NOB, and Fédération des Experts Comptables Européens (FEE) is joined by its UK member ACCA. The close ties between organisations goes further: the chair of CFE's Fiscal Committee is also a member of BusinessEurope's Tax Policy Working Group, while the chair of CFE's Professional Affairs Committee is also the Chairman of the Formal Law Section and a member of the Professional Affairs Committee at NOB.

This makes it very difficult to believe that the aforementioned organisations will have a diversity of opinion, and particularly difficult to imagine that they would have an opinion that conflicts with their direct commercial interests. and those of their clients, which would occur if they were to end tax evasion and aggressive tax planning.

We see a clear conflict of interest, which the Commission has given no indication as to how it intends to solve. As these individuals are in the Platform representing their organisation, there is no obligation to enforce the standard Expert Group rules on conflicts of interest that apply for individuals there in a personal capacity.7 If such rules were applied and enforced, none of the individuals representing employers associations or tax advisers would be able to legitimately take part, due to a direct commercial conflict of interest.

The Platform is also worrying from another perspective: the first condition set by the European Parliament's Budget Committee when it lifted the reserve on the Expert Group budget in September 2012 was that the Commission must “prohibit a single interest category from having the majority of the non-government and non-EU seats in any expert group.”8 However, it is clear that this is not the case for the Platform. Almost two-thirds of all non-governmental places are occupied by a single interest.

As today is only the first meeting of the group, we hope that you are therefore able to reconsider your selection to ensure the Platform represents the public interest of all Europeans who are set to benefit from clamping down on tax evasion and avoidance. Those with a clear conflict of interest should not be eligible to sit on the Platform.