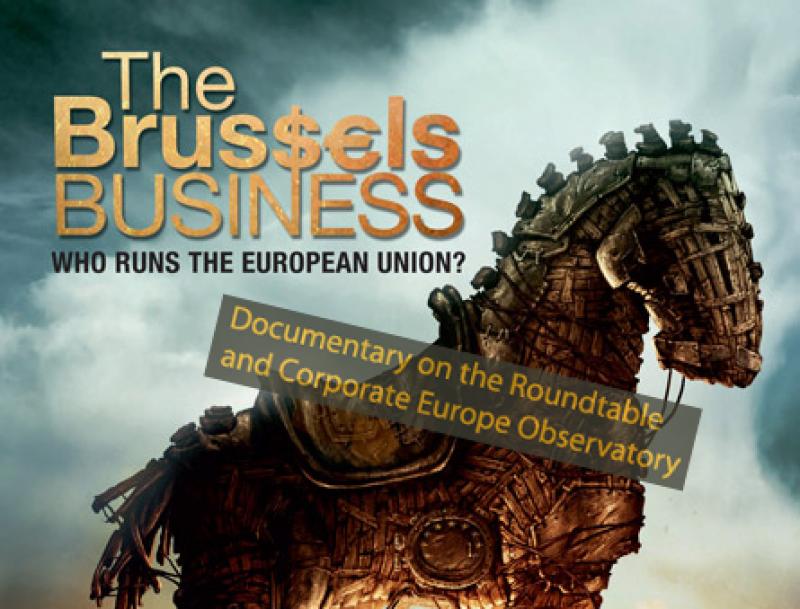 The Roundtable goes for full conquest

Big business in Europe has developed clear ideas for the next steps it wants to see in the EU’s response to the crisis, some of which would simply put society in the service of business. Their agenda fits disturbingly well with what member state governments and the European Commission have been saying recently.

Imagine all of the EU’s environmental legislation being wiped out in one swoop. Or an effective block on anything that might improve working conditions. Or imagine that any member state rules that were considered by the Commission to be in breach of EU rules on the Single Market , eg. on GMOs or on food additives, could be annulled by the Commission without any further discussion. Or that whenever someone, for instance in the European Parliament, proposes a change to an EU law, the suggestion has to be scrutinised immediately by people who care about nothing but the interests of business.

It might sound far-fetched, but proposals along these lines are actually being put forward at the moment. They are being pushed by business lobby groups such as the European Roundtable of Industrialists (ERT), and they resonate well with what governments and the Commission are considering.

For years big business had been pushing for the EU to be empowered to interfere with member state budgets and labour laws. The eurocrisis has made such dreams possible. Now it seems, business groups are gearing up for the next challenge

Industrialists with a vision

ERT, the exclusive lobbying vehicle for big business, run by the chief executives of more than a hundred corporations, is primed for action. Back in September 2011 they met with the German Chancellor Angela Merkel, and in November the ERT chairman, Leif Johansson from Ericsson paid a visit to the Danish Prime Minister Helle Thorning-Schmidt to make sure she would pay attention to the proposals being put forward by big business during the Danish Presidency of the Council1. And the ERT will almost certainly have paid a visit by now to the new chair of the EU Council of Ministers, the government of Cyprus. The ERT has big plans, and they see the EU response to the eurocrisis as an opportunity to make sure they are implemented.

The ERT is not a standard lobby group that addresses any old regulation. It springs to life when there are big changes afoot, when major new developments open a door to comprehensive reforms. The current eurocrisis is certainly such a case. And as always, the ERT is ambitious. It wants no less than for big business interests to dominate all relevant regulation in the future.

The ERT’s agenda is comprehensive. It touches on energy, digital markets, intellectual property rights, taxation, standard setting, labour laws, education, research and many other issues in its current documents. Mostly these contain suggestions that ERT has been repeating for years, suggestions intended to safeguard the specific interests of industrial corporations. But it was always the hallmark of the ERT to elaborate and push for more fundamental reforms, when the time was right. During the course of the eurocrisis, the ERT has already seen reforms it has been advocating for the last decade, approved in no time.

When in 2000, the Lisbon Strategy made competitiveness the overarching goal of the European Union, the ERT had played a major role behind the scenes. But soon after, the group complained that enforcement of the new strategy was being hampered by the European Union’s inability to interfere with member state budgets and labour laws. With the eurocrisis, that obstacle was removed.

Like other business lobby groups, the ERT has warmly supported the new system of ‘economic governance’ that has been introduced in the European Union. Now, it seems, the distinguished club is moving to the next phase in its work to ensure that “all policies across Europe aim to improve industrial competitiveness”, as one of its slogans reads.

The most remarkable proposal could encompass almost all EU rules2. Since the middle of 2011, the ERT has been lobbying to win support for a complete overhaul of EU legislation, a proposal that comes in three parts:

"Better deregulation" and the Single Market

The use of such assessments has been controversial for quite a while, because it has clearly become a cornerstone of some corporate strategies to avoid or influence regulation. One prominent example is British American Tobacco’s (BAT) use of impact assessments as a key tool to help drive policy in the tobacco industry’s favour. With the help of a corporate funded think tank, the European Policy Centre, BAT managed to secure changes to the Treaty of Amsterdam (1997) that opened the door to regular assessments of the impact on business of legislation. This in turn led to the Better Regulation agenda, set up to remove or reduce business regulations. In a report on the programme, the Smokefree Partnership writes: “Without serious consideration, Better Regulation could, just as it seems the corporations involved intended, work to ensure policies that act in business’ interest are more likely to succeed than policies required to protect population, health or the environment”.3

The ERT proposals go much further than the present impact assessments and the Better Regulation agenda. Potentially, they could lead to the large-scale cancellation of regulation already in place, eg. on labour laws, for standards eg. food standards, city planning, consumer rights, environmental protection etc. And they could set the terms of the debate in the European Union in the future, putting business interests at the heart of all discussions.

The ideas of the Roundtable get some support from the biggest business lobby organisation in Brussels, the European employers federation, BusinessEurope. In its recipe for “reinforcing the euro” the organisation states that “above all the Commission needs to get serious in ensuring that all legislation is firstly subject to comprehensive competitiveness checks”4.

But this is not the only far reaching proposal the two are pushing. The ERT and BusinessEurope are also advocating stronger enforcement of the Single Market rules, and have regularly lamented the fact that legislation tends to leave member states with some leeway for flexible interpretation. The cure, according to BusinessEurope, is to ”improve governance and better enforce Single Market rules” and it has asked the Council to make specific proposals to that end5.

Had these ideas been the sole property of the business community, there would be little reason to bother much about them. But over the past few months it seems that following the introduction of sweeping new EU powers to impose austerity and undermine social rights in the form of the rules on ‘economic governance’, the Commission and some governments are keen to address other political issues viewed as important in response to the crisis.

In November 2011, the Commission launched a controversial proposal that, if adopted, will exempt small and medium size enterprises from no less than 21 pieces of legislation, or introduce a ‘lighter regime’. They include rules on safety at work, consultation of employees, rules on parental leave and on energy efficiency6. And also, the Commission is also keen to strengthen the enforcement of rules on the Single Market7.

These priorities are making it into the EU’s most important declarations. This is clear from the so called Compact for Growth and Jobs8 adopted at the EU summit that took place on the 28-29th of June 2012. The pact is mostly known for the 120 billion euro of investments it is supposed to spur – not due to fresh government money, but mainly to the relabelling of unused EU funds and the creative use of about 10 billion euro of extra capital provided to the European Investment Bank. But in fact, the document is more concerned with new attempts to “reduce the overall regulatory burden at EU and national level”, and “deepening” the Single Market.

And there are proponents of fundamental reform at the table, including the UK government and not least the Italian Prime Minister Mario Monti. In October 2009 when Monti still worked for US investment bank Goldman Sachs, he was hired by the Commission to do a major report on the development of the Single Market. In the report from May 2010 he made a ground breaking proposal for a new kind of enforcement for the Single Market: to give the Commission the power to make decisions on infringement, and drop the normal use of court proceedings.9

When he became Italian prime minister, Monti returned to his proposals. In February 2012 he told the Wall Street Journal: “If we give more teeth to the Commission to remove national obstacles to the functioning of the single market, we'll finally create a large level playing field, which the business community always insists is a key component of growth.”10

As a consequence, Monti has now assured the Council that it will be possible to carry out such a fundamental reform of the governance of the single market with a simple, signed political commitment from member state governments.11

As a result of the eurocrisis, reforms have been passed on member state budgets, social policies and labour laws that would have been impossible before the crisis broke. Now, after two years of comprehensive reforms, the Commission and the Council are paying increasing attention to business regulation and the Single Market, issues that were once top priority, but which were put on the back burner for a while.

With the return of ‘better regulation’ and the Single Market to the top of the agenda, there is a real danger that here too the crisis will have made it possible to adopt deeply undemocratic pro-big business legislation. The ideas of the business lobbies are certainly clear enough, and their wildest dreams appear to be taken seriously by the Commission and Council. Should they succeed, it will be a major blow to democracy and another big step towards a corporate Europe.