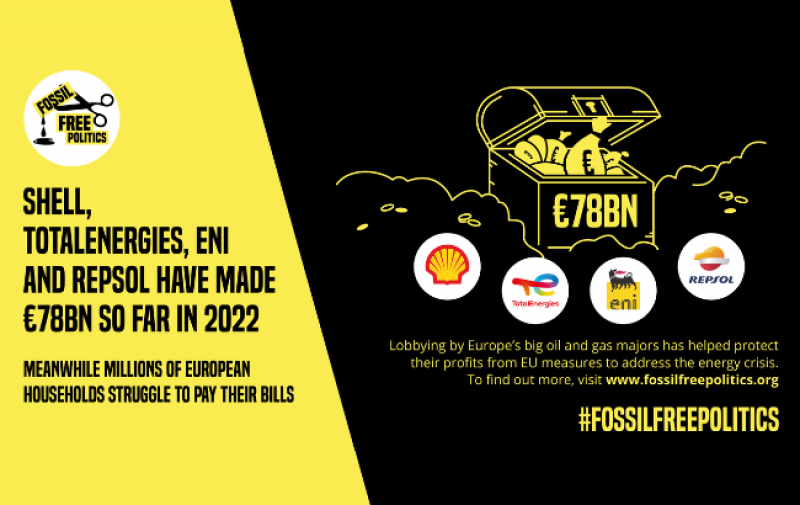 Fuelling the cost of living and energy crisis

Never let a crisis get in the way of a business opportunity seems to be the motto of the fossil fuel industry, as our new research shows. They have had lobby meetings with high-level Commission officials every other working day since the Ukraine invasion!

Our new report ‘Fuelling the cost of living crisis’, shows how Big Oil not only gained unprecedented access to lobby against specific measures to alleviate the cost of living crisis for the general public, but also pushed for yet more fossil fuel infrastructure, locking us into a spiral of skyrocketing energy prices, corporate profiteering, fossil fuel addiction, and climate disaster.

As Repsol, Eni, Total, and Shell posted record profits of €78BN so far in 2022, we reveal how European fossil fuel majors have lobbied to derail political action on energy markets – for example to avoid windfall taxes – allowing them to protect their profits at the expense of millions of households facing crippling energy bills.

As the EU announced its plan to get off Russian gas in March, Commission President Von der Leyen met with the CEOs of Shell, BP, Total, and Eni, organised by the European Round Table of Industrialists (ERT, a club for ‘captains’ of industry). The ERT warned against “fiddling with the market” and of introducing a “problematic” cap on gas prices and the EU delayed months before even considering a price cap, following sustained pressure from national governments.

Von der Leyen also committed what we called ‘A gastastrophic mistake’ and agreed with Big Oil and Gas CEOs from the ERT to set up an industry task force to advise the EU on how to reduce dependency on Russian gas and on joint purchasing of fossil gas, LNG, and in the future hydrogen, a colossal conflict of interest.

With COP27 around the corner, we also want to share with you the statement to ‘Stop funding climate disaster’, signed by 89 organisations demanding an end to Big Bankers’ rule over global climate finance, and a substantial increase in funding from the countries most responsible for disastrous climate change.

Finally, do check out our new cartoon on the false solutions offered up by the fossil fuel industry!

With the warmest regards,