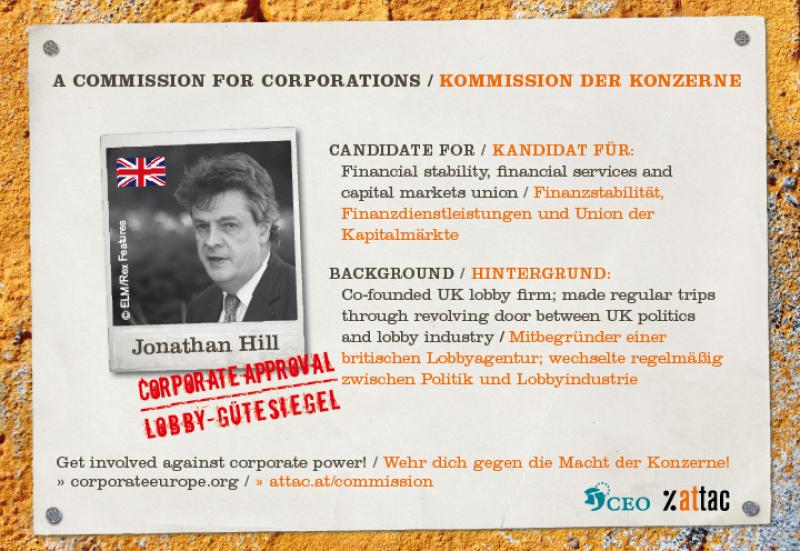 “Today's vote to accept the Juncker Commission is a huge disappointment. Too many of the Juncker commissioners have backgrounds which make them unsuitable for their new portfolio and MEPs should have shown some political muscle by rejecting those about whom serious concerns were raised.”

CEO has previously highlighted several commissioners-designate about whom we have deep reservations regarding their nomination. These included Jonathan Hill as finance commissioner who has had no fewer than four trips through the revolving door between UK government and politics and the lobby/ PR industry. When he left Quiller Consultants in May 2010 to join the UK government, 55 per cent of Quiller's then declared clients (five out of nine) were either banks or finance firms: HSBC, Bank of America, Citadel, Marwyn and Brewin Dolphin.

Quiller is owned by Huntsworth which also owns the EU lobby firm Grayling and UK firm Citigate, yet MEPs failed to secure any additional lobby safeguards on Hill ie. that he would not meet with Quiller, Huntsworth, Grayling, Citigate or any of their clients while commissioner.

In the case of Arias Cañete, the former chairman and shareholder of two petroleum companies, questions about his family's ongoing involvement in these oil companies remain unanswered. Cañete’s role as an administrator of one of the official representatives of the Spanish subsidiary of Panama-based company Angelmo Operational Corp is also controversial. Panama was on the Spanish list of recognised tax havens between 1991 and 2013.

Nearly 600,000 citizens signed a petition to say that Arias Cañete should not be approved by MEPs, demonstrating an unprecedented level of public interest in the commissioner hearings. But MEPs ignored this strong signal and approved his nomination after a secret deal was struck between Jean-Claude Juncker, Martin Schulz MEP (President of the European Parliament) and Manfred Weber MEP (leader of the EPP group). This deal needs to be made public right away.

“It says a lot about the new Commission that Hill, Arias Cañete and others will play prominent roles in important portfolios. For Cañete, a secret party political deal of the 'you scratch my back and I'll scratch yours' variety has seen him approved by the two major political groups. Political leaders in the Brussels bubble have once again shown themselves to be impervious to public opinion.”

“Looking at the Commission as a whole, our fear is that this is a Commission which will prioritise corporate interests over citizens' interests. European citizens who care about the environment, about tackling the banks, about de-intensifying agriculture, should all be concerned about the composition and direction of the Juncker Commission.”

“Our fear is that it will also be a Commission that has learned nothing from the failure and injustice of past austerity policies. It will continue, and possibly expand, the pressure on social rights and public services, including under the slogan of 'competitiveness', as advocated strongly by the biggest and most powerful corporate lobby groups.”

“Too often, commissioners were not adequately grilled about their background and possible conflicts of interest and thus if they were suitable for the role. The commissioners' code of conduct was also shown to contain several loopholes and needs urgent reform*. Meanwhile, MEPs were partisan in their questioning and while the clunky format of the hearings allowed MEPs their 'minute in the sun', too often they failed to elicit precise answers, letting the commissioners-designate off-the-hook.”

* Reforms of the commissioners' code of conduct should include a need to make clear that 'family' interests are broader than those simply involving spouses or partners and the need for far greater clarification and transparency about the process and outcome when files are re-allocated between commissioners because of the risk of a conflict of interest. The declaration of interest form should be revised to reflect the above, to include both present and recent financial interests of commissioners, as well as the family's wider financial interests, rather than just partner/ spouse professional activities.