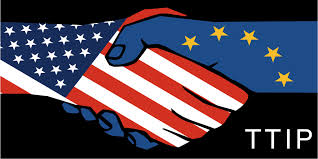 Event organiser Forum Europe has been practising a particularly cynical form of lobbying during the EU-US negotiations on the TTIP trade deal. Conferences sponsored by corporations have become platforms for lobbyists and policy makers. Here we take a look at a Forum Europe TTIP conference staged during the most recent round of negotiations in Brussels.

The business model: visibility for sponsorship

First off, a general remark on Forum Europe's business model: since the late 1980's, they have been organising events and conferences on key EU policy processes. These are primarily financed by the companies advertised as sponsors during the event, guaranteeing them visibility in return for their financial largesse.

For instance, as a so-called "plenary sponsor" you get, among other benefits, a speaking position for a company representative in a plenary session, a full page ad in the conference programme, and five complementary delegate places. The whole package costs €10,000. There are also cheaper ways to sponsor events, for instance the “exclusive host of VIP and speaker dinner” which, for €6,000 will get you an opportunity to speak during the dinner debate and a three-course dinner for speakers and high-level guests. Similarly, "exclusive sponsorship of refreshments” will set you back just €3,000 and means, inter alia, that your corporate identity is displayed in the refreshments area during coffee breaks. All in all, this is a very cynical business model offering corporations relatively cheap access to politicians and decision makers.

The TTIP conference during the 8th round of negotiations

Naturally, Forum Europe made use of the latest round of TTIP talks in Brussels last week. As many US negotiators and national lobbyists were around anyway, this was a great chance to organise a TTIP conference and bring negotiators and the business community together. Even EU trade Commissioner Cecilia Malmström made it to the meeting for a keynote speech.

Leading sponsors of the conference included the international arbitration law firm Sidley Austin, the pharmaceutical company Pfizer, the software business association BSA as well as the computer industry association CCIA. All four have a special interest in the TTIP talks. For instance, Sidley Austin is involved in many arbitration proceedings worldwide and is therefore lobbying heavily so that investor state dispute settlement (ISDS) is part of TTIP. Pfizer works aggressively on one of the key issues during the 8th round of the TTIP talks: regulatory cooperation, which could lower consumer and environmental standards on both sides of the Atlantic. Similarly, the computer and software industry is lobbying on a TTIP chapter for the digital economy that could endanger data protection standards.

The absence of political controversy

A controversial political discussion on the transatlantic trade deal did not take place during the conference. Right from the start, it was clear that the objective was nothing less than an ambitious TTIP agreement that includes investor state dispute settlement and regulatory cooperation. You can find our analysis of regulatory cooperation here.

All speakers maintained that TTIP would never lead to the lowering of social and environmental standards. Moreover, the majority of those present embraced the Commission's recent transparency initiatives, describing them as “absolutely satisfactory”.

The lonely representative of civil society

One of the few representatives of civil society on the prominent panels was Monique Goyens, the director of the European Consumer Association BEUC. However, her critical comments on issues such as ISDS and regulatory cooperation, seemed rather out of place. Goyens commented later on the panel that she felt "a bit lonely with my critical points on TTIP". BEUC had recently criticised the threat posed by regulatory cooperation in TTIP to democracy and regulations.

After the second panel, the conference continued with sectoral working lunches. Participants had the choice between four workshops: agriculture and food, energy and transport, digital and computer technology, chemicals and pharmaceuticals.

Again, in these discussions, the political framework was clear from the start. For example, in the chemical and pharmaceutical lunch, the European chemical association (CEFIC) representative made it clear to US and EU negotiators that regulatory cooperation was the key issue for the chemicals industry in the trade deal. The potential negative consequences of regulatory cooperation to consumer, labour and environmental standards didn't play any role in the discussion. A critical analysis of CEFIC's demands has recently been published by the Center for International Environmental Law (CIEL).

Controversy in the business community: The issue of small and medium-sized enterprises (SMEs)

One of the few noticeable controversies among participants at the TTIP conference became evident during the afternoon panel on small and medium-sized enterprises (SMEs). While all panellists highlighted TTIP's benefits for SMEs, there were critical comments from the audience. An entrepreneur stood up and called TTIP a deal for large corporations that would not bring about any advantages for SMEs.

It was also remarkable that the majority of conference participants had already left the management centre when it came to the discussion on SMEs. The policy makers were gone and most TTIP lobbyists didn't seem to be interested in the debate. This hints at the dominance of large multinationals in the lobby battle surrounding TTIP.

All in all, Forum Europe's business model seems to work. The TTIP discussion was well attended, with around 270 registered participants. Business participants paid €150 per person, €120 for civil society. Representatives from EU institutions could register for free.

It is a shame that EU policy makers took part in such a business-sponsored and business-dominated event. It is fairly disappointing that even trade commissioner Malmström stooped to do the keynote speech. While policy makers are not bought that way, they still legitimise a very cynical business with their participation. This is a business model that further strengthens the voice of corporations in the TTIP talks. Business lobbyists already dominate the lobby battle around TTIP, offering them even more influence is totally unacceptable.