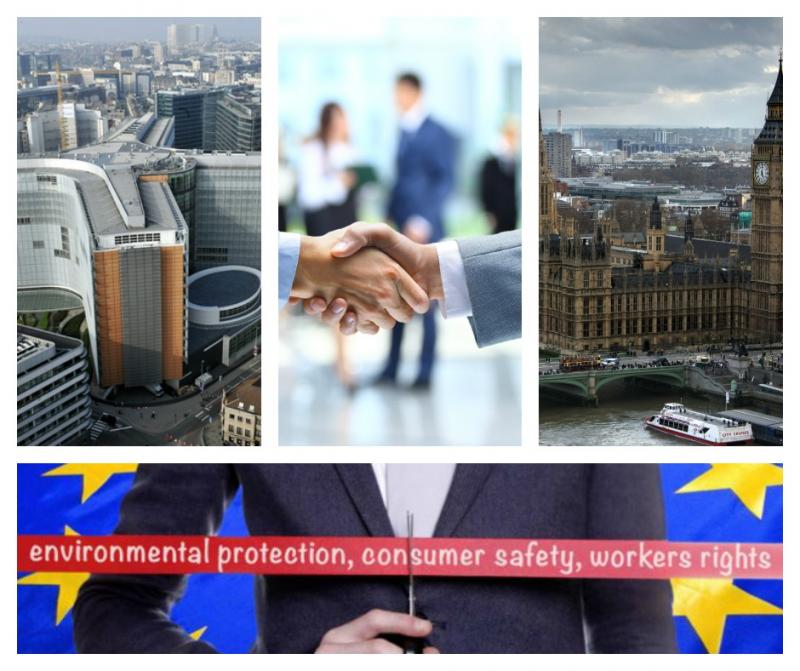 Cameron and the European Commission: doing the business of business

As the UK goes to the polls, CEO reflects upon the similarities between the UK and EU's 'better regulation' agendas.

A previous version of this article was published by Open Democracy.

No one likes the thought of bureaucracy, 'red tape', over-regulation, and excessive 'administrative burdens'. But what about rules to ensure safety at work, to protect our environment, and to ensure we know where our food comes from? In fact, these are two sides of the same coin and right now a war is being fought in London and in Brussels against the latter, but under the disguise of attacking the former.

And despite the self-promoted image of David Cameron standing-up for the UK against the powers-that-be in the EU and its so-called bloated bureaucracy, there are some remarkable synergies between his record in office and that of the European Commission, especially in the area of deregulation and cutting 'red tape'.

On the day that the UK goes to the polls, it is time to reflect upon the deregulation agenda embarked upon by the Cameron-led coalition government. It has not received the attention that it deserves but it has been very significant. It has been an ideological project motivated by the belief that very little, including government regulations, should stand in the way of business doing business. To soften the critics a little, deregulation is often branded “better regulation”.

In 2012, the UK government introduced a ‘one-in, two-out’ policy ie. for every £1 of additional cost imposed on business by new regulations, the government should save businesses £2 by removing or modifying existing regulations. This upgraded the original 'one-in, one-out' policy which was introduced in 2010 and which, now UK law thanks to the Small Business, Enterprise and Employment Act, locks the policy in for future governments. Speaking in the Parliamentary debate for the legislation, Caroline Lucas MP said:

“Nobody supports regulation for its own sake, but it is equally facile to oppose all regulation in a similar manner. The deregulatory zeal of this Government, which the new duty will entrench, is premised on just that: on the assumption that all regulation is bad and is something we should seek to minimise.”

Furthermore, in 2013, Cameron set up the Business Taskforce to “to get bureaucracy out of the way of business” at both the national and EU levels. Led by six leaders from big business and a government minister, it came up with 30 proposals for where EU regulations should be abandoned, scrapped or reduced and it came up with seven principles that should be used to evaluate any new EU regulatory proposal. This recipe for 'red tape' reduction includes a competitiveness test. To pass, legislative proposals must show they boost European competitiveness, and a one-in, one-out system (for every new piece of legislation, an old one must go; new 'burdens' must be offset elsewhere). It also includes an overall target to reduce regulatory 'burdens' on business, and to exempt small and medium businesses from EU law wherever possible. The report was presented to leaders at the October 2013 European Council and it seems to have gone down rather well.

One year on, the taskforce reported that as many as 10 of the original 30 recommendations had already been met. These included the proposed regulation on shale gas downgraded to a light-touch recommendation; new rules to reduce the number of environmental impact assessments carried out; and the withdrawal of the soil directive. George Monbiot has described the torpedoing of this directive as a coup by the government and the UK farming lobby, the National Farmers’ Union (NFU). The taskforce further reports that in an additional 10 areas, progress is being made.

As the New Economics Foundation has put it in a recent critique, the

And the Cameron government's drive to cut 'red tape' has continued. The new Deregulation Act which recently passed into law with surprisingly little publicity

“provides for the removal or reduction of burdens on businesses, civil society, individuals, public sector bodies and the taxpayer.”

Of potentially huge significance, it gives a duty on those exercising specific regulatory functions to have regard to the desirability of “promoting economic growth”. Such regulators could include: Care Quality Commission, Drinking Water Inspectorate, Environment Agency, Equality and Human Rights Commission, Food Standards Agency, Health and Safety Executive, Office for Standards in Education, Children’s Services and Skills, and many, many others. The law is newly in place and so what this means in practice is not yet clear, but it is a highly worrying development. Speaking during a House of Lords debate on the legislation, Lord Tunnicliffe said:

“if our fears comes to pass, [this] could wreak havoc in a regulatory regime within this country that, generally speaking, is doing pretty well.”

Unfortunately, the Cameron deregulation agenda is not so far removed from what is going on in Brussels. As previously exposed by Corporate Europe Observatory and Friends of the Earth Europe, 'better regulation' started under the former president of the Commission Jose Manuel Barroso and is now being firmly built upon by his successor Jean Claude Juncker and his right-hand man, Vice President Frans Timmermans, the “better regulation” commissioner.

Of particular concern to trade unions right now is Timmermans' alleged proposal to introduce public consultation on so-called European social partner agreements. The unions suspect that Timmermans is putting this procedure in place to “neutralise” the elements of the EU treaty that allows European employers’ federations and trade unions to make agreements in their sectors. These agreements can cover health and safety issues, lifelong learning, working conditions and more. Both trade unions and employers’ federations at European level have issued letters criticising the leaked proposals as “highly inappropriate”.

At a public meeting on Friday 24 April, Timmermans created further anxiety among the social partners when he declared that contrary to his predecessors, his 'better regulation' proposals would not include new social or environmental laws. He stated:

“It is not polite to slag off previous Commission's work, but our Better Regulation is focussed. We are here to lessen the burden on small and medium-sized companies, nothing else.”

This all plays right into the hands of those like David Cameron who would like free rein to tear up progressive labour and environmental laws, and will lead to a patchwork of rules and regulations across the EU, and a possible race to the bottom as companies shift to the least regulated operating environment that they can find. Trade unions are already calling this an attack on (what remains of) Social Europe.

And now a leaked version of Timmermans' proposals sheds further light on his plans, expected to be finally launched later this month. The leaked document says:

“The European Parliament and the Council should ... mirror the Commission's commitment to Better Regulation, as must Member States when implementing Union law.”

In essence, this will mean member state governments and MEPs will need to submit their proposals for substantial changes to legislation to a handful of experts who will assess “the likely impact and regulatory burden before any final decision”. Together with the other plans revealed in the leaked document, Friends of the Earth Europe’s Paul de Clerk called the proposal “a huge power grab”, while Cécile Toubeau, of NGO Transport & Environment (T&E) said: “The fact is the Commission is demoting the two democratically elected EU bodies, the Parliament and the Council, to the role of Yes Men.”

Meanwhile, the Commission's REFIT programme carries on. Started by Barroso in 2012 and now inherited and revamped by Timmermans, REFIT (the regulatory fitness and performance programme) promises further efforts to cut 'red tape', and it has been a major focus of corporate lobbying. EuroCommerce, BusinessEurope, EuroChambres, the European Roundtable of Industrialists and many others have all been very active. So has UEAPME (Union Européenne de l’Artisanat et des Petites et Moyennes Entreprises) or “the voice of SMEs in Europe” which is headed by Peter Faross, who previously had a 30-year career in the Commission.

And if this wasn't enough, this whole approach could well be locked in for the future via the EU-US trade deal (or TTIP) if the negotiations conclude on their current track. Regulatory cooperation will bind EU countries into lowest common denominator regulation and a scaling-back of progressive regulations, while ensuring that business has a big say on future rules.

Under TTIP, this will be an ongoing process. Issues not resolved in the trade negotiations themselves could be revisited later on, through the “Regulatory Cooperation Council”, consisting of a handful of officials from the EU and US with enormous enormous influence to stop or weaken legislative proposals that businesses say would harm them, or to promote legislative proposals that would lower requirements for companies. The unelected officials would have their say, before the proposal sees any light of day in any elected parliament or assembly. The fact that this whole idea was initially put forward by BusinessEurope and the US Chamber of Commerce tells you all you need to know about how they feel about it. With their considerable lobbying resources focussed on the regulatory cooperation mechanism, they must expect to win win win the battle against those pesky social, consumer and environment laws.

“Let me set out some of the key [demands from the EU]. Powers flowing away from Brussels, not always to it ... Businesses liberated from 'red tape' and benefiting from the strength of the EU’s own market – the biggest and wealthiest on the planet – to open up greater free trade with North America and Asia.”

This is Cameron's vision for the EU, and unfortunately, it is not far from the reality. As workers, consumers and citizens from across the EU, we should be worried. The deregulation agenda is being pushed by big business working hand-in-hand with politicians and it needs to be opposed.

Politicians should not be doing the business of business.