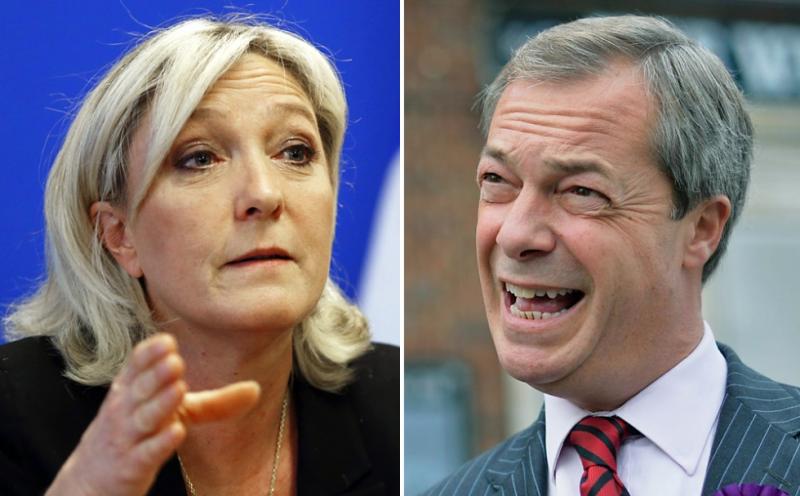 Extreme finance: the far-right and its funding

First up is Janice Atkinson MEP and her chief of staff Christine Hewitt, who have reportedly been expelled by the UK Independence Party (UKIP) when Hewitt apparently tried to procure an inflated restaurant bill to put in for an EU (taxpayer funded) expenses claim. She told the restaurant

“The idea is we overcharge them slightly because that's the way we repatriate it”.

The allegations were referred to the police. Atkinson says that she will appeal; UKIP says it takes a “zero tolerance attitude towards acts of this nature”. Yet Labour MEPs beg to differ. On 27 April, Richard Corbett MEP tweeted:

“#EP President confirms that #UKIP 's Group in EP has STILL not expelled #JaniceAtkinson MEP -quietly keeping her despite what they say inUK”,

“According to UKIP MEP Agnew in plenary chamber #JaniceAtkinson is still in "good standing" in their political group: tells you everything!”.

Back in 2009 UKIP leader Nigel Farage was caught on tape discussing his non-salary expenses and allowances since becoming an MEP in 1999. “It is a vast sum. I don't know what the total amount is but - oh lor - it must be pushing £2 million. According to The Observer newspaper reporting at the time,

“Farage insisted that he had not "pocketed" the money but had used the "very large sum of European taxpayers' money" to help promote Ukip's message that the UK should get out of the EU.”

In 2014, Farage received a fine of £200 for failing to report to the UK authorities that he received the free use of office premises from a donor.

Meanwhile several enquiries are under way into whether the Front National has broken the European Parliament rules by using EU funds to pay the salaries of up to 20 national party officials, under the pretence that they were working for MEPs. This is now being investigated by the French public prosecutor’s office and OLAF. The potential fraud could amount to as much as €7.5 million; Marine Le Pen has strongly denied the charges.

Whatever the truth of these allegations, for these far-right groups, it is rather convenient to bash the EU on the one hand, while holding their wallets wide open for EU cash with the other. All allegations of wrong-doing regarding expenses, by left or right, should be investigated. But it seems like there are also some far more sinister sources of funding being procured by some far-right political groups in Europe.

In April 2015, the Dutch newspaper Trouw published an interview with far-right Dutch politician Joram van Klaveren, who has just left Geert Wilders' PVV party to set up his own party, Voor Nederland ('for The Netherlands'). Van Klaveren thinks the PVV has become far too left-wing, a remarkable view, considering that the PVV continues to promote a radical right-wing mix of anti-environment, climate-sceptical, anti-immigration and anti-Islam policies. It also advocates withdrawal from the EU, which the PVV considers to be leftwing.

In the article van Klaveren talks about his contacts with UKIP (translated from original Dutch):

“We met Farage in Brussels, in a restaurant. It was very relaxing. We first talked for thirty minutes about football, then about the food. Only then it was about politics. It clicked. He found us very interesting. I think it's quite special: we are a party with only a few hundred members, we still have no party leader, we are only a few people, but he did not mind. Size is not everything, he says. We have met a few times since then. UKIP representatives also came to The Hague. Through UKIP we are invited by the American Heritage Foundation, a large conservative think tank. It has offered to raise funds for us. We go there in May, to present ourselves to the Americans.”

While there is no suggestion that UKIP has itself accepted donations from the Heritage Foundation (that would be illegal under UK party funding rules), the implication of this article is that UKIP has brokered a relationship to try to help another extreme far-right political group in the EU. The Heritage Foundation is a well-known right-wing think-tank espousing “free enterprise, limited government, individual freedom, traditional American values, and a strong national defense”. It has a record of funding European climate-sceptical thinktanks.

Meanwhile the Front National has admitted accepting a €9 million loan from the First Czech Russian Bank, which is based in Moscow and is owned by Kremlin ally oligarch Roman Popov. The loan was apparently brokered by Front National MEP Jean-Luc Schaffhauser. Denying any impropriety, Marine Le Pen has said:

“What is scandalous is that French banks aren’t lending”.

On this occasion at least, the European banks who refused to lend to the Front National have got it right. For extreme, far-right groups it seems easy to spout the rhetoric of independence and patriotism, and rather less easy to follow it when it comes to accepting funding.