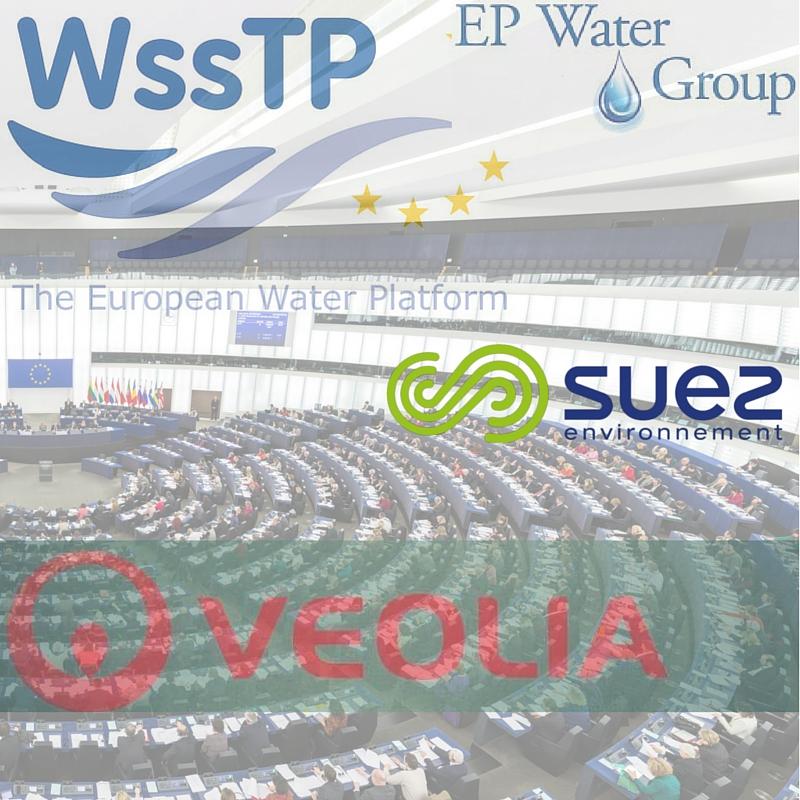 Another MEP-industry forum in need of investigation

“The Water Group's political expertise has always ensured a strategic approach. Whether on the link between water and biodiversity, the monitoring of the Water Framework Directive, or on the role of the private sector, your group has always been to the fore.”

And with this quote the European commissioner for Environment, Maritime affairs, and Fisheries, Karmenu Vella, began his speech to the EP Water Group dinner on 18 November 2015. This group is no longer an officially-recognised intergroup (it was during the 2009-2014 legislature) but appears to now be an informal MEP-industry forum and it brings together MEPs, other decision-makers, industry and other 'stakeholders' to discuss matters relating to EU water policy. CEO has recently profiled – and criticised – such forums for the cosy relations between MEPs and big business that they can ferment.

However, more than in many other sectors, big business' involvement in water management is contentious because of the terrible track record of private companies in managing municipal water services and water resources. The 2013 European citizen's initiative (coordinated by EPSU, the European Federation of Public Services Unions) on the right to water attracted the support of nearly two million EU citizens to recognise water as a public good, not a commodity; to promote the provision of water and sanitation as essential public services for all; to ensure that water supply and management of water resources not be subject to ‘internal market rules’; and that water services are excluded from liberalisation.

So by bringing together MEPs and multinational water companies to discuss water issues, the EP Water Group is already on controversial territory.

What we do know is that the members of the EP Water Group appear to enjoy wining and dining. Of the three types of activities listed on the website, two are “breakfast meetings” and “high-profile dinners” on specific water sector issues, although both appear to be invitation only. In addition to the Vella event, in April 2015 the EP Water Group hosted Research commissioner Carlos Moedas for another dinner event. Happily, the rest of us are are at least allowed to attend the third type of activity ie. plenary events, such as this one on water in the circular economy although the speakers' list is revealing: representatives from SUEZ Environnement and Dow Chemical took part alongside speakers from the Commission and the Dutch government, and an MEP.

The Vella dinner mentioned above concerned the circular economy and Vella's speech talked up the role of the private sector. Also taking part was Bruno Tisserand, the president of EurEau, one of Brussels' trade associations representing Europe's (public and private) water services providers. Tisserand has worked at Veolia (the major French water company) since 1985, most recently as research programme director. Since 1990, Tisserand has also been part of FP2E (Fédération Professionnelle des Entreprises de l'Eau), the French private water companies' lobby.

A number of important questions must be asked about the EP Water Group. Rule 34 of the Parliament's rules of procedures says:

“Individual Members may form Intergroups or other unofficial groupings of Members … Such groupings may not engage in any activities which might result in confusion with the official activities of Parliament or of its bodies …”.

In that case, why is there a European Parliament logo on the EP Water Group's website, on its newsletter and on, for example, the press release sent out after the Vella event? This makes it look as if it is an official Parliamentary body, which it is not, and in our view, undermines Parliament's integrity. Furthermore, even though the EP Water Group is not an official intergroup, why is there no published list of MEP and other members on its website? Why such secrecy? Parliamentary rule 34 also says:

“Such groupings shall be required to declare any support, whether in cash or in kind (e.g. secretarial assistance), which if offered to Members as individuals would have to be declared...”.

No membership list was provided, but we were told that invitations for the dinner events are sent to a “representative group of relevant stakeholders”. We were sent the attendance lists for the Moedas and Vella dinners.

The EP Water Group's secretarial function is provided by the Water supply and sanitation Technology Platform (WssTP) – this information, at least, is made public.

WssTP calls itself the “European Water Platform” and it regularly reminds readers that it was "initiated by the European Commission...". Originally it was funded by the Commission's DG Research, as one of several technology platforms, to advise on the allocation of EU research funding, but it became an independent entity in 2007.

These technology platforms remain strange beasts. Even though they are are now independent and self-financed, they can be seen as corporate interest lobby groups which were set up by the Commission. Or as the Commission itself puts it:

You can read more CEO research on how technology platforms have been used as lobby vehicles here: agrofuels, nuclear energy, and others.

Today, WssTP seems to be about ensuring that EU water policies and research funding are geared towards its members' interests, encouraging members' involvement in projects, and promoting the overall competitiveness of the European water industry. It is a network of major water utilities and other corporations with a direct financial interest in the water sector, including Coca Cola, Dow, P+G, Shell, Saudi Aramco, Suez Environnement, United Utilities, and Veolia, alongside smaller firms and academic / research institutions. No environmental or consumers' NGOs or trade unions appear to be in the list of 150+ members.

The WssTP represents a very particular vision of water policy, reflecting the particular interests of many of its members, which is that there should be a leading role for private sector providers in water and sanitation policy. This view is disputed by others working in the water and sanitation sector which is why it is so worrying that the WssTP provides the secretariat for the EP Water Group.

WssTP's board also includes a lot of corporate interests. The president is from Suez Environnement which also has another representative at WssTP board level; Veolia also has two representatives, and between them these two corporations alone make up 36 per cent of the WssTP board.

The director of the WssTP is Durk Krol and he has been in that role since August 2011. According to his Linked-in profile, Krol himself has been involved in water issues for quite some time: he was deputy secretary-general of EurEau for seven years until 2011. During this time, he also joined the board of WssTP and for 20 months, he was secretary general of the predecessor of the EP Water Group, the water intergroup in the European Parliament which was, at that time, an officially-recognised intergroup with EurEau providing the secretariat.

As its lobby transparency register entry makes clear, WssTP's priorities include “Ensuring the European Growth and Competitiveness of the Water Sector” and promoting “Technological leadership by the European Water Industry”. WssTP declares the equivalent of 3.5 full-time lobbyists and it holds two European Parliament access passes. However, in his email to CEO, WssTP's Durk Krol says that “our staff is registered in the transparency register primarily to easily access the EP for events” and that “WssTP doesn’t have 3.5 have full time lobbyists”. This is confusing and it would be a breach of the lobby register's rules if the data provided to it was not “complete, up-to-date and not misleading”. CEO has now raised this, and related matters, with the lobby register secretariat. Meanwhile, according to Integritywatch, WssTP has had at least two meetings with senior members of the Commission since 1 Dec 2014:

By accepting the secretarial assistance of the WssTP, the EP Water Group shows its true colours. While it calls itself “the focal point for the water topic in the European Parliament”, in fact it promotes an agenda that is backed by corporate interests. Its lack of public transparency about its members and funding sources, alongside the highly dubious use of the Parliament's logo, further discredits it. And we are not the only ones with concerns. Commissioner Vella has been criticised for his decision to speak at the EP Water Group event in November 2015.

In response to our earlier report on intergroups, the college of Quaestors in the European Parliament has initiated a review into the implementation of rule 34 and we hope that it will add the EP Water Group to its agenda. But a more fundamental re-think of the legitimacy of these informal MEP-industry forums is also long overdue.

Update 17 May 2016: the lobby register authorities have now replied to this complaint and you can read more here.