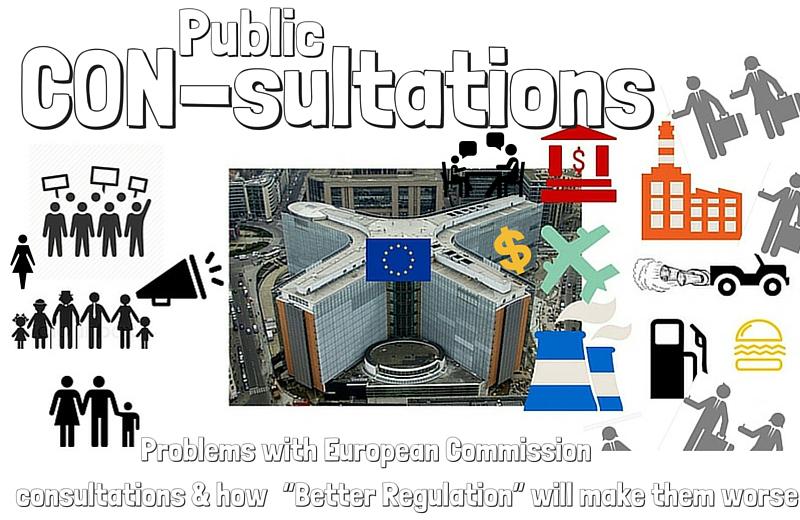 Problems with public consultations, and how “Better Regulation” will make them worse

In the more than a decade since online public consultations were introduced, the Commission has fallen far short of ensuring that consultations are fully transparent, that privileged access is prevented, that all those concerned are reached and that critical input is treated seriously. A lack of reflection over examples of consultations that fell particularly far short or learning lessons of 'bad practice' has confounded this problem.

There are many and serious flaws in how online public consultations are conducted by the European Commission and things are likely to get even worse with the co-optation of public consultations by corporate interests and a complicit Commission, under the guise of 'Better Regulation'. Clearly, many of the problems highlighted in this report could be improved upon, from greater transparency over responses and how they are taken into account, to less leading questions, more room for alternatives and critical views, and efforts to enable greater and more representative engagement. However, it is clear to us that detailed recommendations of how to fix these problems would be futile without a greater sea change. What is needed, to quote ALTER-EU's book "Bursting the Brussels Bubble", is "a broader democratisation that empowers the engagement of citizens’ groups in decision making" as well as "a far more active commitment by decision makers to defend public-interest concerns against the constant pressure from numerous, well-resourced commercial lobbyists". The Juncker Commission, by contrast, seems stubbornly determined to further strengthen the deregulatory tide of 'Better Regulation', making the 'competitiveness' of business the raison d'etre of all policy. Regardless of the costs to people, planet and democracy.