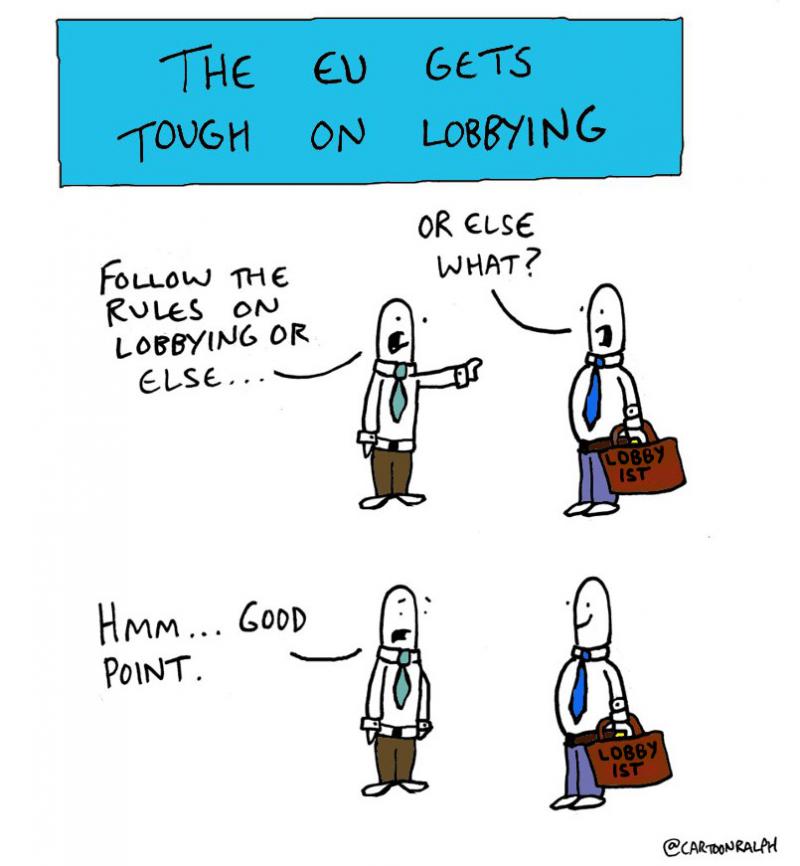 The Commission is set to announce its proposal for a new ‘mandatory’ lobby transparency register next week. During the Summer, the Commission made public the input it received via consultation on the topic. Besides a general call from public and civil society to boost transparency systems, they also showed corporate lobby groups and trade associations’ spin, promoting transparency values while recommending limited implementation, loopholes and toothless management.

(Read the consultation response of CEO and ALTER-EU)

Almost 1000 individuals submitted their own views to the consultation, plus 783 organisations, most of whom were already registered. During the Summer the Commission published a summary of the responses and it clearly showed the distance between individuals and civil society and that of corporate actors. This was particularly true in respect to the scope of information to be shared in the revamped register. As the report states:

”...examination, indicated that, although most registered organisations are content with the status quo, there are views that too little information is being requested particularly amongst NGOs whilst at the other end, there are many that think that too much information is being requested particularly amongst business actors, trade associations and sub-national authorities.”

Looking at specific replies1 explains this divide. Many corporate lobbies were looking to restrict the definition of what is lobbying, trying to introduce special caveats for trade associations, rejecting tougher sanctions, and trying to ensure they can police themselves.

What should be covered by the lobby register?

One of the points of contention relates to the actual definition of lobbying. As it stands the Transparency Register includes lobbying, interest representation and advocacy as “It covers all activities carried out to influence - directly or indirectly - policymaking, policy implementation and decision-making in the European Parliament and the European Commission, no matter where they are carried out or which channel or method of communication is used.”

Several corporate actors took issue with the wide reach of the current definition of lobbying activities and suggested ways of further narrowing it down. For instance, the Bristish lobby consultancy Hill and Knowlton, and the trade association for tech giants, DigitalEurope, both ask for the definition of lobbying drafted by the Council to be used instead.

”’Lobbying’ means promoting specific interests by communicating with a public official as part of a structural and organised action aimed at influencing public decision-making.”

Nestle took it a step further and suggested that there should be “An exhaustive list of activities could be useful to better define what is meant”.

By narrowing the definition in such a way, activities that were not foreseen or that are not interpreted as being a part of a ”structural and organised action” will fall outside of the scope and outside of scrutiny, in short, creating loopholes and allowing types of lobbying activities to go under the radar. Indeed, in the view of CEO, the current broad definition of lobbying is one of the current register’s biggest strengths!

A special role for trade and business organisations

Trade and business associations argue that they should be operate under a different transparency regime than other lobby actors. BUSINESSEUROPE, one of the biggest trade associations lobbying the EU, argues that bodies like itself need “be recognised as playing a specific role”. This is echoed by DIGITALEUROPE, the trade association that counts the world’s tech giants such as Microsoft, Google and Apple among its members:

“The relevance and expertise of stakeholders must be taken into account by the EU institutions as the quality of information is vital to creating legislation that is fit for purpose. As such, we believe that bodies representing collective interests must be recognised as playing a unique role in the policy making process.”

On top of all this, BUSINESSEUROPE wants to be distinguished from other interest representatives in the register by being categorised as a European Social Partner to convey to the wider public that they “are playing an institutional role, and are sometimes integral part of the legislative process, in accordance with a procedure foreseen in the EU Treaties.”

But this is tricky. Social dialogue is already excluded from the provisions of the lobby register; but BUSINESSEUROPE carries out a huge amount of other lobbying on behalf of itself and its members, and that must be fully transparent. Social partner status should not confer additional benefits – nor special categorisation.

The not so mandatory register

The European Commission is expected to announce a de facto mandatory register, backed up by an inter-institutional agreement. Such a set-up would mean that the register continues to have no legal authority to compel lobbyists to register. Inter-institutional agreements only bind the EU institutions and staff working within it so the Commission’s ‘mandatory’ register simply refers to a system of policy ‘carrots’ to incentivise registration, including lobby access to higher level staff.

Lobby consultancies and public affairs trade associations mostly support the Transparency Register but with a voluntary arrangement (the exception is the European Public Affairs Consultancies Association or EPACA). For instance, the Society of European Affairs Professionals (SEAP) makes the case for an expanded register that “motivates” or “encourages” organisations to register:

“SEAP supports a mandatory Transparency Register that will help create a level-playing field across the profession and will put transparency at the heart of EU decision-making. This cannot come at the cost of the freedom to access policy makers and should not impose additional administrative burdens on registration.”

“The minute you make the registration mandatory you lose valuable audience members from academics, to scientists, to constituents of MEPs, careful consideration of a mandatory register needs to be taken, and of its overall value added.”

SEAP recommends a voluntary code of conduct, such as the one designed by itself, to act as the compass for policy-makers when deciding whom to meet. Yet, it makes no mention of how these voluntary codes would be enforced or that the Register already has its own code of conduct.

“We would especially see major problems if the register were to be made conditional on commissioners or senior commission officials being able to meet stakeholders. This could limit the meetings to representatives of the “Brussels bubble”, and make it more difficult for SME representatives (who are often not on the register) to meet with decision-makers. It would thus impede on the Commission’s goal of better integrating SME concerns in its policies and, more generally, run against its vision for smarter and better law-making.”

CEO supports a legally-binding register that defines a threshold for mandatory registration, so that constituents meeting their MEPs, for example, would not be forced to register. Without a legal act to back up the register, there is no tool to apply sanctions or criminal prosecutions for serious breaches. In effect, this means the register remains voluntary.

The alternative to a legally-binding register is de facto mandatory, where certain lobby privileges are withdrawn from non compliant organisations.

A de facto mandatory system also relies on adequate scrutiny of the register, particularly to confirm that the entries themselves are correctly filled in and to impose sanctions in case of non-compliance. In the case of a de facto mandatory system, the only available sanction is to temporarily suspend the registration of that organisation, and even this is not used often in cases of providing inaccurate or misleading data.

A reocurring concern relates to the current level of staffing capacity dedicated to monitor the data and investigate is inadequate. Indeed, a line commonly quoted in the responses was that, as said by lobby consultancy Cambre Associates, as well as EPACA and CEFIC:

“The situation today, with a couple of NGOs responsible for almost all surveillance and subsequent complaints is not ideal”

CEO and ALTER-EU have been calling for the Commission to increase the staff dedicated to reviewing and controlling entries and to apply actual sanctions when it finds non-compliance. Interestingly, some of the organisations propose not an increase in staff employed to monitor the register but instead to volunteer their employees or create advisory groups to support this role.

“(...) clear rules and their actual enforcement are key. The Joint Transparency Register Secretariat staffing should therefore be increased. This would help to deploy effective enforcement of rules, which improves comparability of data provided. Volkswagen furthermore suggests establishing an advisory body to the Secretariat. It goes without saying that public interest in transparent and accountable policy making is a legitimate claim. This is reflected by increased media reporting on EU lobbying practices. Taking into account the rising significance of the Register as a source of information for international media reporting, it appears to be reasonable to establish a group providing advice to the Joint Transparency Register Secretariat, composed of representatives of organizations present in the Register. This could help to achieve the Register’s initial goal in mutual dialogue and to report in a well-structured way on practical experiences while filling in or using the Register. Even an involvement in dispute settlement could be considered for such a group.”

Similarly, SEAP suggests that the register secretariat should be replaced by an ‘independent complaint body’ and offers SEAP volunteers to be a part of it!

It is clear that there is a need for an independent body that oversees the quality of the registrations and handles the complaints. However, a truly independent body cannot be made up of organisations in the register or take in specific volunteers from companies and lobby groups. Such a system would lead to self-policing, likely coupled with a general unwillingness to get tough and would seriously diminish the practical use of a Transparency Register, potentially leading to even further misconduct and misinformation.

Often, the submissions reveal commonalities within specific industries. This is true of the tobacco sector, including the Imperial Tobacco, the Confederation of European Community Cigarette Manufacturers (CECCM), and the European Smoking Tobacco Association (ESTA), which repeatedly reiterated that access to policy-making should be granted to all actors.

The Imperial Tobacco Group stresses equity of access as a value to regulate lobbying. This is also mentioned by CECCM which relates it back to the Commission's Better Regulation agenda saying:

“All legitimate stakeholders shall be involved in the EU decision making process and shall have access to the institutions, provided that they comply with the requirements as set out in the Transparency Register.”

“ESTA also takes the chance to say that as long as they abide to this transparency directives that no stakeholder should be discriminated.”

The tobacco lobby’s preoccupation with guaranteeing access to all stakeholders is a clear response to the requirement on the Commission to implement the World Health Organisation’s Framework Convention of Tobacco Control Article 5.3 that demands policy-makers restrict contacts with tobacco lobbyists to the minimum, after decades of tobacco lobbying which ultimately seriously damaged public health. The Commission’s handling of tobacco lobbying has been heavily criticised by the European Ombudsman and the Commission must now resist any efforts by the tobacco industry to water-down its international commitments to restrict tobacco lobbying. Instead, this register reform process should be an opportunity to tighten up those restrictions.

The submissions to this public consultation have allowed us a more detailed insight to the demands of the corporate lobbies that claim to be committed to increasing transparency. It shows us how on general level they express support for the Transparency Register while opposing tougher scrutiny and regulation. They seek to weaken the definition of lobbying, demand reduced information disclosure, a toothless register, potentially even policed by themselves.

It will be a test of the political will of the Commission if it can resist such pressures.

1Throughout this text, we refer to the replies submitted to the consultation on Transparency Register available at - https://ec.europa.eu/eusurvey/publication/PublicConsultationTransparencyRegisterMarch-2016 .