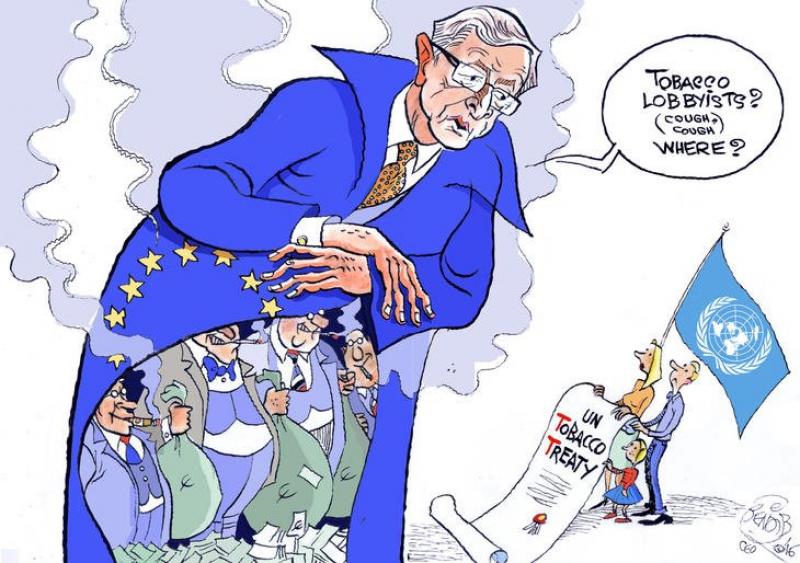 CEO welcomes the very strongly worded final ruling by European Ombudsman Emily O’Reilly in her inquiry into the Commission’s implementation of UN rules for contacts with tobacco industry lobbyists.

O’Reilly today closed her inquiry by concluding that “the Commission’s refusal to publish online details of all meetings which its services and its staff have with the tobacco industry constitutes maladministration”. Currently only one of the Commission’s 30+ departments has specific rules for relations with the tobacco industry (DG Health), in line with the World Health Organisation’s Framework Convention on Tobacco Control (to which the EU is a signatory). The inquiry was sparked by a October 2014 complaint by Corporate Europe Observatory (CEO) against the Commission.

The Ombudsman’s decision follows the Commission’s negative response earlier this year – signed by Commission President Juncker – to her draft recommendation. In her decision, the Ombudsman outlines in detail why she “strongly disapproves” of Juncker's response. “The Commission’s persistent refusal to extend the transparency policy of DG Health to all its Dgs”, O’Reilly writes, “cannot be reconciled with the clear objectives of Article 5(3)" of the UN tobacco treaty. O’Reilly points out that the Commission “has failed to provide any convincing arguments to justify its refusal”.

The Commission’s refusal to apply these rules across the Commission departments ignores the fact that most tobacco industry lobbying is targeting other Commission departments than DG Health and therefore escape public scrutiny. This includes powerful Commission departments such as DG Trade and DG GROW (Internal Market and Industry). A Commission document released to CEO in September – following an FOI request – shows that tobacco companies had numerous meeting with DG GROW. The meetings, involving the Confederation of European Cigarettes Manufacturers (CECCM), Philip Morris International, Japan Tobacco International and British American Tobacco, were on issues such as the implementation of the tobacco products directive, health warnings on cigarette packs and track and trace systems. The meetings were with desk officers, Heads of Unit and advisors, all of which are not covered by the Commission’s current rules on disclosure of meetings with lobbyists.

Earlier this year, CEO exposed attempts by the tobacco industry to use the Commission’s flagship “Better Regulation” initiative to weaken tobacco control measures such as health warnings on cigarette packs. This has included efforts to bypass the health commissioner by lobbying the cabinet of Commission Vice-President Timmermans, who is responsible for ‘Better Regulation’. Last autumn, the European Commission ‘released’ very heavily redacted documents concerning their contacts with tobacco giants Philip Morris and BAT on EU trade negotiations, including the ongoing EU-Japan and EU-US trade talks (TTIP).

Commission President Juncker’s refusal to act on the Ombudsman’s recommendations has been widely criticised, including by Vytenis Andriukaitis, European Commissioner for Health. Andriukaitis has revealed that the response to the Ombudsman was drafted by the Commission’s Legal Services, signed by Juncker and sent to the Ombudsman without consulting other commissioners. A European Parliament resolution earlier this year concluded “that the Commission’s credibility and seriousness have been endangered” by its stance on tobacco lobbying transparency.