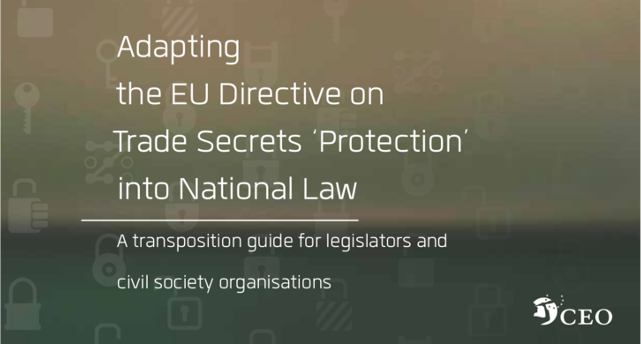 A transposition guide for legislators and civil society organisations

In June 2016, the EU’s Trade Secrets Protection Directive was enacted to repress espionage, theft and unauthorised publication of companies' confidential business information, their “trade secrets”. But the way it defines these is so broad that it will also, in all likelihood, make public scrutiny of corporate activities more difficult in Europe. This “transposition briefing” (download) to the Directive aims at providing background information and analysis to this legislation in order to help national legislators and civil society when it reaches national parliaments for discussion and adoption.

This is a major concern for the media and their sources, for unions, for researchers. Employees’ rights are also at stake, as this text has led to concerns regarding their freedom to go work for a competitor of their current employer.

The result of heavy corporate lobbyingi and a very heated public debate at the end of the process, the new “Directive (EU) 2016/943 on the protection of undisclosed know-how and business information (trade secrets) against their unlawful acquisition, use and disclosure” needs to be adapted into national law (transposed) to become effective. EU member states have until 9 June 2018 to do so.

Based on legal research and interviews with civil society organisations trying to defend a critical perspective during the negotiations on the Directive at the EU level, this “transposition guide” to the Directive aims at providing background information and analysis to this legislation in order to help national legislators and civil society when it reaches national parliaments for discussion and adoption. This brief introduction is followed by an individual analysis of the most important articles of the Directive. Not all aspects and elements of the Directive, as well as the interactions between this Directive and the respective applicable national legal frameworks, are covered in this guide, and the authors, despite their best efforts, are not legal specialists in these matters: it is important that additional legal counsel is requested in each EU country before the transposition debates start.

Despite the strong resistance put up by civil society during the EU negotiations, this text was adopted with insufficient safeguards for political rights. It creates excessive secrecy and information control rights for businesses, getting dangerously close to creating a property right for confidential information where secrecy would become the legal norm and freedom of access, use and publication the exception. The ‘protections’ on the confidentiality of trade secrets during legal proceedings (Article 9) also risk damaging the rights of defense during a court case if interpreted too narrowly by judges.

This makes defending the safeguards obtained in the text, for journalists, employees, unionists and whistleblowers in particular, and using existing possibilities of damage control, all the more important. The integrity and translations of Articles 1 (scope), 2 (definitions), 3 (lawful acquisitions), and 5 (exceptions) in particular must be watched with utmost care.

National legislators have substantial margins of manoeuvre. Although they are given much more liberty to worsen the text than to improve it, they have at least some real possibilities to limit the risks: adopt strong legislation against litigation abuses (Article 7), adopt a short limitation period (Article 8 - the maximum period of time after the facts during which companies can sue is six years), and limit the damages asked to employees (Article 14) who act without intent.

It is probable, unfortunately, that the main political battle at the national level will be to prevent a further worsening of the text. Member states are explicitly offered to do just this in the very first Article of the Directive. In particular, they can (but are not required to) add criminal law elements (fines and prison sentences), for which the EU had no competence, and they can be even more repressive as long as they respect the basic safeguards of the Directive. Companies that operate in several EU countries will have possibilities to sue from the country whose legislation is most favourable to their interests (which largely contradicts the initial aim of legal harmonisation by the European Commission). Finally, it must be said that several aspects of the Directive are not well defined, the exceptions and safeguards in particular, and that the protective nature of these safeguards will be tested in national and EU courts.