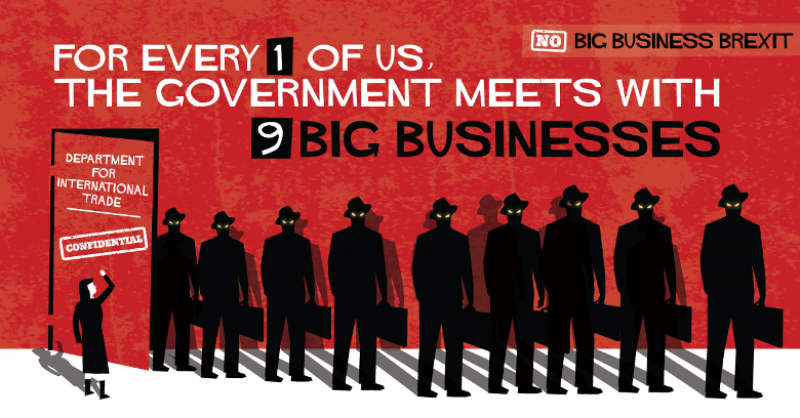 UK trade secretary Liam Fox has come under fire for the strong business bias of his Department for International Trade's lobby meetings, as he launches unofficial trade negotiations with the US today. It is a bias that raises questions about the way a possible post-Brexit UK-EU trade deal might be skewed in the interest of Big Business.

Our new briefing, Big Business Britain - How corporate lobbyists are dominating meetings with trade ministers, jointly published with Global Justice Now, reveals the extent to which ministers at the UK Department for International Trade (DIT) are “overwhelmingly prioritising meeting with lobbyists from big business over all other interests.”

The analysis of official meeting records reveals that nine out of ten DIT lobby meetings between October 2016 and March 2017 were with business. This includes 8 meetings with HSBC, 6 with Barclays Bank, and 7 with oil giant BP, while public institutions, trade unions, civil society groups and even pro-business think tanks accounted for less than 10% of all meetings. 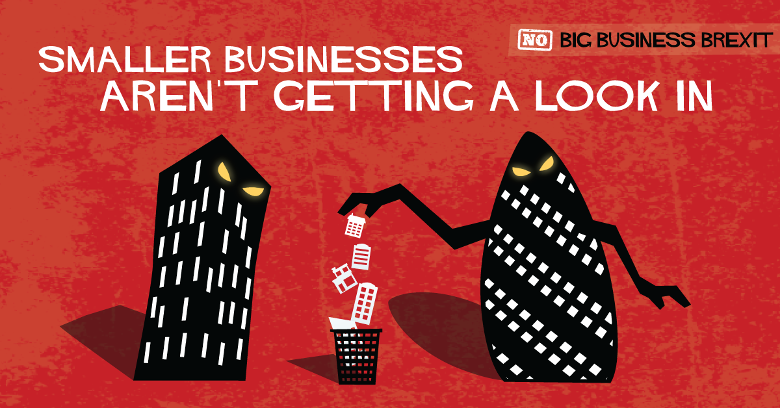 Ministers have refused to answer basic parliamentary questions as to the nature of the trade negotiations, including information on who is invited, what is on the agenda and where the talks are taking place. These details have also been judged to be beyond the reach of Freedom of Information requests.

The dataset for this analysis can be accessed here.

The corporate bias in the lobby meetings of DIT mirrors the pattern of lobbying seen at the UK's Department for Exiting the EU (DEXEU) and the EU's Brexit Task Force, as our subsequent research shows.

****This research is co-published by Corporate Europe Observatory and Global Justice Now.****

I have some sympathy with your report about business lobbying and Brexit because I had a similarly frustrating experience with DEXEU last year, when I asked for details of the timetable and scope of their consultations on Brexit. They have refused to provide that information and I have now complained to the ICO - but progress is painfully slow. You can find my complaint on the website "what do they know". But I don't understand why you focussed solely on DIT - why didn't you ask DEXEU as well? That would have given a more complete picture of the position. 3 more points:

1. Your report could have highlighted the fact that the government has not actually run any proper consultations on Brexit. By "proper" I mean there should be a document setting out the options, telling you who to respond to and when to respond by (which is what normally happens with legislation). Anyone can respond to that - wherever they are in the country and regardless of how well connected they are. You see if you can find any consultations meeting that description on DEXEU's website.

2. Taken in isolation, your statistics on small businesses are rather misleading. Yes, there are lots of small businesses - and as you say, the number of medium (50-249 employees) and large (250+ employees) businesses in the UK is under 1%. Yet those businesses account for a whopping 68% of total turnover and 52% of private sector employment. So fundamentally, there is nothing wrong with government talking to those businesses - they would be negligent if they did not. Of course smaller businesses need to be listened to as well, but it doesn't surprise me that DIT isn't talking to them quite as much - because the majority of them probably don't export at all. Their interest will be in imports - cheaper imports of goods they sell or services they rely on could be good for them, but cheaper competition from abroad may not be - and government needs to be sensitive to that (but not at the expense of talking to larger businesses).

3. I suspect that larger businesses - despite getting more meetings with Ministers - don't feel they are being listened to either on Brexit (there has certainly been a lot of press commentary to the effect that unless you are supportive of Brexit, David Davis and Liam Fox aren't particularly interested). So the real issue is - even if smaller businesses and representatives of consumers etc were getting meetings, would the government actually take on board what they were saying? I suspect not, because their approach to Brexit so far seems to have been dictated more by ideology and wishful thinking than evidence. A more interesting question would be whether there has been bias towards groups which are supportive of Brexit - such as the Legatum Institute - but which are not representative of either business (big or small) or wider public opinion.

Thanks for your interesting feedback
Vicky Cann