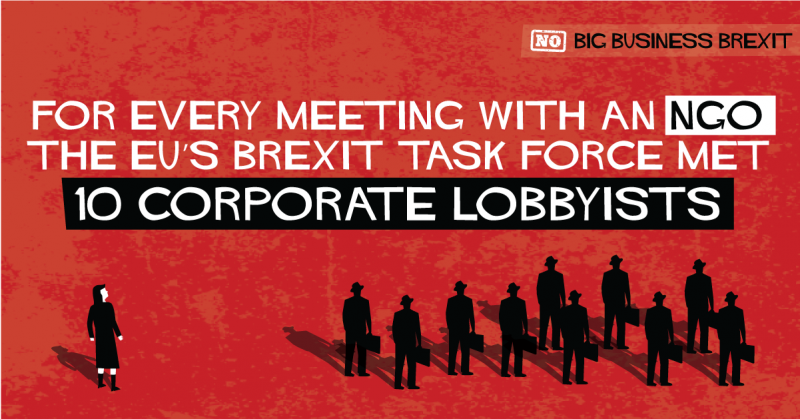 Corporate lobbyists have enjoyed the biggest share of consultations with the UK’s Department for Exiting the EU and the EU Brexit Task Force. Our new research reveals their privileged access and the secrecy around these lobby meetings, which risk to sideline the wider needs of civil society and smaller businesses in an upcoming Brexit deal.

The far-reaching Brexit agreement that will govern the UK’s exit from the European Union is not only being shaped at the negotiating table, but also by the lobbyists who are trying to influence each side’s position papers and red lines.

New analysis of official statistics on lobby meetings with ministers from the UK’s Department for Exiting the EU (DExEU) and members of the EU’s Brexit Task Force reveals a common willingness to privilege the representatives of corporate interests above all others:

The full list of meetings highlights just how rarely citizens and smaller businesses have been heard by the negotiators, despite the fact that the Brexit deal will directly affect the everyday lives of all UK residents and the country’s many small and medium-sized businesses.

The research also highlights that both the UK and EU negotiators withhold participant lists, agendas, minutes and all other documents from their lobby meetings, making it impossible to know who exactly is in the room or which specific policy options are discussed.

The corporate bias in the lobby meetings of DExEU mirrors the pattern of lobbying seen at the UK Department for International Trade. The ministers developing the UK’s post-Brexit trade relationships with the rest of the world have been holding 90 per cent of their lobby meetings with representatives of business interests, previous research showed.

****This research is co-published by Corporate Europe Observatory and Global Justice Now.****