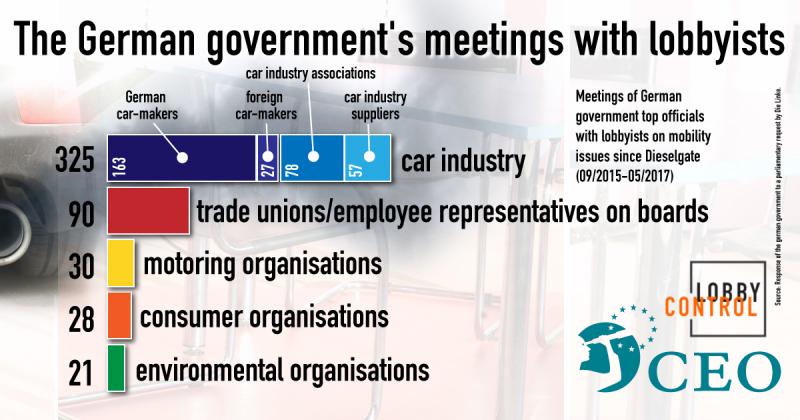 This week marks the two-year anniversary of one of the most serious cases of corporate fraud in modern history: the Dieselgate scandal. In September 2015, car manufacturer Volkswagen was caught red-handed in the use of ‘defeat devices’ - software enabling its diesel cars to pass pollution emissions tests, while actually exceeding EU pollution limits by more than ten times once on the road.

By now, it’s clear that emissions cheating has been a widespread practice in the car industry, with official investigations underway against car producers including Daimler, Audi, Fiat-Chrysler and Renault. Such a monumental scale of deception was only made possible by the European Commission and EU member state governments turning a blind eye to the trickery. At the same time, industry’s level of influence over EU car emission rules ties the Dieselgate scandal into the wider context of corporate capture of regulation.

For years, the illegal levels of air pollution from diesel cars have caused illness and premature death among thousands of Europeans. The International Council on Clean Transportation (ICCT) estimates this caused 6,800 premature deaths in Europe in 2015 alone. Right now, an estimated 25 million diesel cars with excessive NOx emissions are still on the road in Europe.

Members of the European Parliament last week discussed the fallout of two years of Dieselgate revelations, investigations and follow-up and criticised just how lax the European Commission and member states’ reactions to the scandal have remained. Indeed, the European authorities’ responses pale into insignificance compared to the multi-billion dollar fines which US authorities have slapped on the car manufacturers concerned.

Although the Commission kept highlighting its new, stricter testing rules, which came into force on 1 September 2017, parliamentarians were not convinced. Not only are there loopholes in the new rules, but they also still allow diesel cars to emit more than double the legal limit (210%) for another three years.

At the same time, the rules only apply to new cars, not the non-compliant ones already on the roads. Socialist and Green Members of the European Parliament (MEPs) called on the Commission to recall non-compliant vehicles to “take them out of our streets”. There were also demands for proper compensation of all those citizens who had bought cars that have turned out to be in breech of emission rules.

Meanwhile, citizens are left to feel that car manufacturers have shirked accountability for their monumental toxic emissions fraud. Even in Germany, where the car industry provides hundreds of thousands of jobs and generates billions in export profits each year, two thirds of the population wantt tougher action against the car industry over Dieselgate. German media have also increased their criticism of the unhealthy collusion between the government and car industry lobbyists, which also provides ammunition to opposition parties in the run-up to the German parliamentary elections later this month.

This new wave of criticism around excessive car industry influence comes after the German government and carmakers worked out a deal at the Berlin ‘Diesel Summit‘ in August, a conference to which environment NGOs and consumer representatives were not invited. At the meeting, car manufacturers pledged to provide software updates for the 5.3 million diesel cars on Germany‘s roads that were fitted with the defeat devices. This low-cost ‘solution‘ will only reduce emissions marginally but is a dream come true for the car industry, as it avoids a much more costly, proper technical adaptation of the cars that would lower NOx emissions to legal levels.

Watchdog LobbyControl assessed the Diesel Summit deal as “a victory for the car lobby“ and slammed the intimate relations between government and car industry.

Since the Volkswagen scandal broke in 2015, German government officials have held 325 meetings with car industry lobbyists on Dieselgate and air pollution, compared to 90 meetings with trade unions (many of which are union representatives on car company boards) and just 49 with environmental and consumer groups, analysis by LobbyControl has shown. The deeply rooted intimacy between policy-makers and car lobbyists is also highlighted by the many revolving door moves between the Merkel government – as well as the wider German political elite - and the car industry.

A case in point is Merkel’s re-election campaign coordinator Joachim Koschnicke, who used to be a top lobbyist for car maker Opel/ Vauxhall. Similarly, the German chancellor’s former head of office and ex-deputy government speaker now work as a lobbyist for Volkswagen.

German newspaper Süddeutsche Zeitung recently reported that European Commissioner and member of the Christian Democratic Union (CDU) Günther Oettinger may well be considered to lead powerful German car industry lobby group Verband der Automobilindustrie (VDA) in the future, a rumour which Oettinger has denied. Incidentally, the car industry, according to LobbyControl, has donated a whopping 17 million euro to German political parties since 2009 - most of which went to Merkel’s CDU.

Pressure on the German government is also coming from cities like Stuttgart, Munich and Dusseldorf, where inner-city diesel bans are impending, and from no less than 16 law suits filed by environmental NGO Deutsche Umwelthilfe because of the federal government’s breaching of air quality limits.

At the same time, the German car industry remains in denial over Dieselgate and the weaknesses and perils of diesel technology more generally. Last week car producers reiterated claims about the sustainability of diesel technology during the high-profile International Motor Show in Frankfurt, which was ceremoniously launched with a speech by chancellor Merkel.

Even though the German government’s cosy relations with the car industry are finally under scrutiny and subject to public pressure, change is unlikely to materialise anytime soon. In Brussels alone, the car industry spends 15-20 million euro a year on lobbying - what are the chances of a re-think given such corporate firepower?

As the European Parliament’s Dieselgate report notes, the Commission “lacked the political will and decisiveness to [...] give priority to the protection of public health of citizens" over the economic interests of the car industry in the years preceding the scandal. What we have seen is the Commission’s change of tack on the rhetorical level, signalling a tougher stance.

EU Industry Commissioner Bieńkowska has been the one to lead on this messaging, even referring to possible support for a recall of non-compliant vehicles. Also in last week’s hearing with MEPs, Bieńkowska slammed the car industry for clinging on to diesel – a technology both outdated and highly pollutant. Yet, the same hearing also featured a speech by EU chief of competitiveness and Commission vice-president Katainen, which did little to indicate any appetite for challenging car industry interests.

In its Dieselgate report, the European Parliament outlines quite clearly how the European Commission must improve its ways of working to help curb the car industry’s influence over policy-making. Among other things, their demands include measures to prevent industry dominance in advisory groups and a transparency boost for the EU policy-making process in general. One may have thought that the dominance of corporate interests in relevant Commission expert groups would have been reigned in after the scandal broke, but Corporate Europe Observatory earlier this year revealed their continuing dominance in an important EU advisory group on car emissions rules.

Parliamentarians also used the inquiry report to call on the Commission to transfer all legislative responsibilities for car emissions from the very industry-friendly DG GROW, which even helped manufacturers delay stricter enforcement of emissions rules, to the environment department DG ENVI. While this shift would undoubtedly make a positive difference, it seems the Commission will be unlikely to follow these demands.

The one thing that is clear is the Autumn 2018 deadline, by which the European Commission needs to have submitted a comprehensive report responding to the recommendations in the EU Parliament’s Dieselgate report - another year from now.

As we write, two years have already passed since the Dieselgate scandal first made headlines. Citizens, diesel car owners, environmentalists, and public health professionals remain outraged at the extent of the duplicity and the collusion that has enabled it to go on for so long – without an end in sight yet.

Whether it is in Berlin or Brussels, the car industry is still setting the agenda for emissions regulation and politicians have been unwilling to cut their ties to the car lobby to finally get tough on diesel vehicle emissions. Until they do, the health of millions of people across Europe will continue to suffer from the consequences.