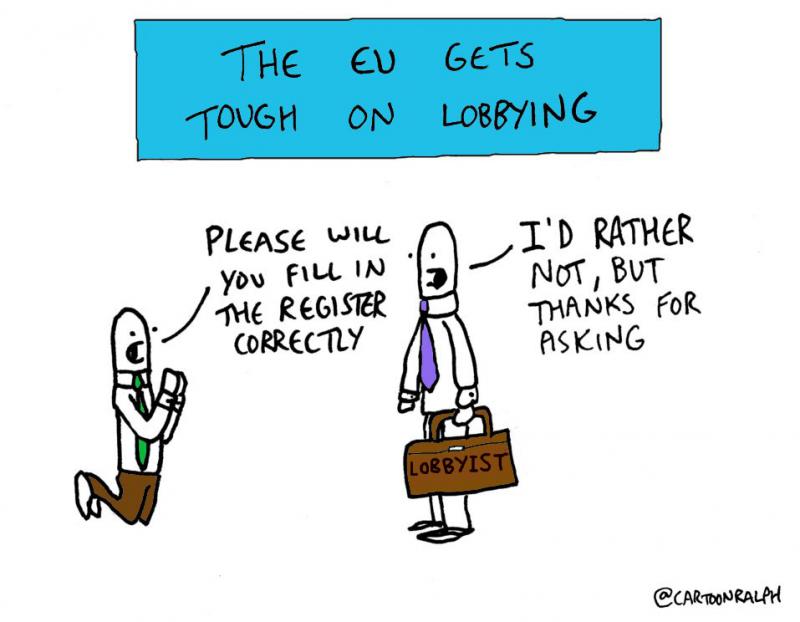 Dodgy data and missing lobby organisations still characterise the EU’s voluntary lobby transparency register. Corporate Europe Observatory has now submitted a series of complaints on specific entries, and urges decision-makers to get tough on those who break the rules.

The European Commission and the Parliament, together with the Council of the EU, will shortly start to negotiate a new EU lobby transparency register. Some in the Brussels Bubble think that the EU lobby transparency regime already works well and only a few tweaks need to be made here and there. But as this set of complaints shows, a new register is sorely needed. Corporate Europe Observatory’s analysis of the failures of the current, voluntary register highlights dodgy data, under-reported spending, missing entries, and a lack of enforcement.

“The estimated annual costs arising from activities covered by the Register cover direct and indirect lobbying.” [All highlighted quotes in this article are taken from EU lobby register guidelines.]

Audible Magic is a technology firm that declares less than €9,999 annual EU lobby expenditure. Yet there is evidence that Audible Magic has an active lobbying operation in Brussels which includes emails, telephone calls, and meetings with MEPs, DG Connect officials, the Permanent Representations, and even Commissioner Ansip himself. The company has a lot to lobby on, as a developer of filtering technology to detect copyright infringements which is the subject of much debate in the context of the Copyright Directive. Audible Magic’s controversial software is often referred to in those discussions as an example of how filtering is easy and cheap to implement, claims disputed by digital rights activists EDRi. Corporate Europe Observatory asks: is it credible that Audible Magic is running its EU lobby operation on less than €9,999 a year?

“You must provide the financial data requested at the time of your next annual update unless any of the above exceptions applies. The appropriate exception must be specified in the text box provided.”

While newly-created organisations, or organisations that have only recently joined the lobby register, will understandably not have a previous year’s lobby budget to declare in the EU transparency register, that does not apply in subsequent years. Considering this, it begs the question: why does economic think tank EPICENTER (European Policy Information Center), which was set up in 2014, joined the lobby register in 2016, and benefits from three Parliamentary passes, continue to declare no budget, saying that it is a “Newly formed entity, no financial year closed”?

The Consumer Choice Center calls itself “a global initiative that empowers consumers worldwide” although recent research by Corporate Europe Observatory presents a rather different picture. When the CCC launched earlier this year, it immediately declared a hefty 2015-16 budget of €3,652,198 in its lobby register declaration with €100,000 - €199,999 dedicated to EU lobbying. The register requires NGOs to state their overall budget, broken down by main financing sources, but the CCC simply recorded its €3 million plus budget as “donations” without providing any other information. CCC has subsequently told us that it received a seed grant from Students For Liberty, and funds from other sources including Japan Tobacco International, but by listing all its income as “donations” it creates the impression that CCC is funded by individual grassroots donations. Some right-wing MEPs have recently demanded more scrutiny of NGOs’ funding sources. Maybe they should start with the CCC and demand both a proper breakdown of its funding, plus clarity about its exact relationship with Students for Liberty (whose income mostly originates with US right-wing plutocrat Charles Koch, of the Koch Industries, as well as like-minded think tanks).

Meanwhile, Corporate Europe Observatory’s recent complaint about the register entry of pesticides giant Monsanto highlights the contradiction between its lobby register declaration of annual EU lobby spending amounting to a maximum of €399,999, while EU lobby consultancies declare annual income from Monsanto of at least €910,000. In the US lobby register, where the reporting requirements are much stricter than in the EU, Monsanto declared spending US$4,600,000 on its lobbying of Washington DC in 2016. The regulatory impact of EU policy-making on Monsanto is comparable to that of Washington, so it is reasonable to expect that the true figure of Monsanto’s EU lobbying would be higher than its declared €399,999.

Another example is EUTOP, a lobby consultancy based in Germany but which has registered three times as Brussels, Europe, and Frankfurt Finance entities. The difference between the three entries is far from clear and the website addresses provided are identical. But by making three separate entries, EUTOP ignores the register’s “single entry rule”. It also effectively masks the fact that collectively EUTOP holds a huge number of European Parliamentary passes (23 in total across the three registrations), while the declarations of clients which include British American Tobacco, Airbus, Deutsche Telekom, and General Electric are confusing. EUTOP avoided joining the lobby register until December 2016 and it appears to remain resistant to full lobby transparency.

“You must provide a list of all clients on whose behalf your organisation carries out activities covered by the Register.”

Another concern about the EU lobby register relates to lobby consultancies and law firms which do not maintain a full client list as required to do so by the lobby register rules. For example, major lobby firm GPLUS has attended meetings with the EU’s Brexit task force alongside the European Fisheries Alliance (EUFA). EUFA’s lobby register entry reads “GPLUS EUROPE functions as the secretariat of the European Fisheries Alliance”, but GPLUS’ entry to the lobby register, while listing several members of the EU fishing lobby, does not list EUFA as a new or pre-existing client. The relationship between GPLUS and EUFA should be clear in both GPLUS’ and EUFA’s entries to the lobby register, especially in terms of any funding arrangement or staff capacity devoted to it. In fact, the attendance of EUFA at the Brexit task force meetings was a breach of the Commission’s transparecy rules as President Juncker has said the taskforce will not meet with any unregistered lobby groups.“

“The scope of the register covers all activities [...] carried out with the objective of directly or indirectly influencing the formulation or implementation of policy and the decision-making processes of the EU Institutions, irrespective of where they are.”

The voluntary nature of the register means that too many groups remain missing and have failed to sign up.

Take for instance communications firm MC Group, which in August 2017 sent out invitations for a press conference in the European Parliament with the Ambassador and a minister from Qatar, but which is not in the EU lobby register. In 2015, Corporate Europe Observatory published a detailed report about lobbying of the EU institutions by third countries, including repressive regimes. The report highlights the loopholes in the present EU lobby register which enables some of this lobbying to take place under the radar.

Another missing entry is Fair Energy which calls itself an “advocacy campaign set up to promote the key goals of the European Union in the energy field: sustainability, security and stability of supply, diversified resources and open and unified markets”. It also calls itself an “independent think tank” yet says that it is “sponsored by Naftogaz”, Ukraine’s national oil and gas company. It runs the “Keep Europe United - Fair Energy Security Campaign” and is surely aiming to influence EU decision-making, but is absent from the register.

The Institute for Economic Affairs, meanwhile, benefits from the declaration of a fellow think tank (EPICENTER) as three of IEA’s staff hold European Parliament passes under the auspices of EPICENTER, but is itself entirely absent from the register.

PR firm Everjust is also missing from the register. Its clients include “corporations, trade associations and non-profit organisations” and its services include “Regulators engagement”. Everjust has a prime office space near to the European Parliament. Maybe its absence from the register is explained by the fact that it says that its clients value “confidentiality”, but it is unacceptable that influencing intermediaries such as law firms and lobby firms hide their clients from public view.

These complaints offer just a few snapshots of the wider problems of dodgy data in the EU lobby register and its missing lobbyists. These failures undermine the credibility of the register as a whole.

Corporate Europe Observatory and the Alliance for Lobbying Transparency and Ethics Regulation say it’s time for the EU institutions to get tough on lobby transparency in the upcoming register negotiations. This would mean creating a legally-binding EU lobby register to enable serious sanctions such as fines, and to give the register the authority that it needs. In the shorter term before legislation can be enacted, we need to see tighter rules on lobby declarations to drive up the quality of the data; far greater monitoring and enforcement; and tougher sanctions and more suspensions of access when declarations are misleading.

Unfortunately, if past experience is anything to go on, lobby transparency reform at the EU moves glacially slowly and without high ambition. A reformed register was promised by President Juncker in July 2014 and inter-institutional negotiations on the Commission’s (flawed) proposal haven’t even started yet. Without concerted action the EU register will remain deeply fallible.