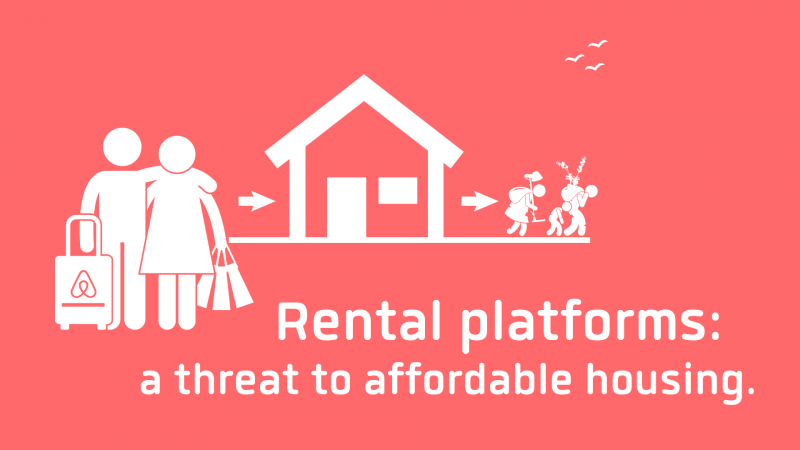 AirBnB and its allies are lobbying the EU to fight measures to protect affordable housing in cities across Europe. Our new report “UnFairbnb” looks at the way in which their Brussels lobbying undermines cities’ ability to regulate the AirBnB model for holiday rentals.

Cities like Amsterdam, Barcelona, Berlin and Paris have hit the headlines with their attempts to reign in giant rental platforms a la AirBnB, and concerns about the impact of the model are increasing in many other cities. In response to an intensifying squeeze of housing markets and spiralling rental costs at the hands of these online platforms, new city-level restrictions are enacted almost every week.

But in recent years, lobbyists have been working to counter this development. Corporate Europe Observatory’s new report “UnfairBnB” reveals the attempts of the companies behind the platforms to fight against European cities’ measures to protect affordable housing by lobbying the EU institutions and even filing official complaints against Berlin, Paris, Barcelona and Brussels.

Key findings of the report include:

- The European Commission is consistently working to interpret EU rules in favour of the tourist accommodation platforms.
- The Commission’s department for internal market and industry (DG GROW) is in regular contact with all main lobby groups for the sector, which are allowed to follow its every step.
- Significant concessions have already been made to AirBnB and its lobby association, the European Holiday Home Association, which has filed a complaint to the Commission against Berlin, Paris, Barcelona and Brussels that could end up in front of the European Court of Justice.
- The Commission’s own report on platforms like AirBnB features a significant commercial element, calling into question the platforms’ claim to a grassroots image.
- Within two years, the EU lobby spending of AirBnB has increased from less than €100,000 to just under €500,000. (2015-2016, latest available figures). The lobbying expenditure of other similar companies, such as Expedia, owner of HomeAway, follow the same pattern.