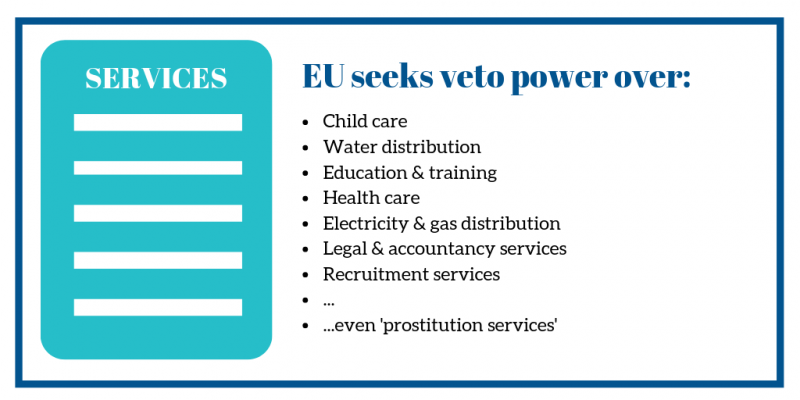 Advance veto power would affect a huge range of services

New information shows the chilling scope of proposed EU rules on services (the ‘Bolkestein Directive’) that would give the Commission advance veto power over decisions taken by parliaments and city councils on a vast range of services, including everything from childcare, to energy, to water, and even sex work.

If it were up to the Commission, it would have advance veto power over new draft motions made by national parliaments and city councils that affected ‘services’. An extraordinary range of sectors – at least 79 – are included, covering areas as diverse as child care, chimney sweeping, legal advice, and ‘prostitution services’. This is the essence of the Commission’s proposal on a new ‘notification procedure’, an initiative to secure implementation of the services directive (aka ‘the Bolkestein Directive’ after the Commissioner who drafted it).

The proposed EU directive would strengthen the procedure by which local and national governments send information to the Commission about new laws and measures. While an older and less restrictive notification procedure already exists, the Commission now wants this to happen three months in advance. Corporate Europe Observatory sent a formal request for more information and though the details remain secret, we do now have a list of the sectors covered by ‘notification’ between 2010 and 2015.[1] Below we look in more detail at the tremendous impact a Commission wielding veto powers could have.

Public services that all citizens rely on and whose functioning is often crucial to everyday life would be affected. These include child care services, water distribution, educational and training services, health services, gas and electricity distribution.

But our information is limited. While Corporate Europe Observatory has requested to see the actual documents, not just a list of sectors, so far the Commission has refused.[2] However, it is still worth taking a look at what impact a veto power by the Commission could have over measures and laws in services. To do we need to examine articles 15 and 16 in the Services Directive.

According to article 15, member states should be careful about taking measures such as imposing a minimum number of employees, fixing a maximum price, requiring a company to have a specific legal form, or to impose a quantitative or territorial limit.

Article 16, the most far reaching paragraph in the directive, is a different animal. According to this article, member states simply cannot make the exercise of a service activity “subject to compliance of any requirements”, unless they are “necessary” and “proportionate”. And the definition of ‘necessity’ is limited, so to invoke this clause the measure would have to be about “public policy, public security, public health or the protection of the environment”. These would be open to the Commission’s interpretation, of course. And should a new law or measure be created in the name of say, mere ‘social justice’, it would be more difficult to make the argument.

What this could lead to

It can be difficult to assess whether single market rules on services are being adhered to in full, and there are many examples of disputes between member states and the Commission on this very issue. What the proposal on a new notification procedure does is shift the balance of power decisively in favour of the Commission.

The Commission is unwilling to release information on what specific decisions they would be about. We can get a list of sectors concerned but information on what decisions were made and on what topic.  This is not conducive to transparent decision-making and difficult to accept in that the directive could be decided on soon. But looking at the legal text and the list of sectors covered, we can construct a few hypothetical but realistic examples to give a sense of what is at stake:

Better not let the Commission decide

In our hypothetical scenarios, while it might be the case that some would be allowed, the key point is that it shouldn’t be for the Commission to decide in the first place. The Commission is extremely eager to sideline any other criteria beyond concern for the single market, and giving it the power to veto in advance is very dangerous. Moreover, the Services Directive was never supposed to be implemented in this top-down manner. Let’s keep it that way.

[1] A ‘notification’ is made by member states when they draft new rules – laws or administrative decisions of a general nature – covered by the Services Directive. It is then sent to the Commission for consideration. At the moment this can happen after the rule in question has been adopted. The Commission can then decide to object to the decision or to certain parts of it. The list mentioned in the text show what sectors have been covered by notifications between 2010 and 2015: https://www.asktheeu.org/en/request/consultation_on_services_notific?nocache=incoming-19764#incoming-19764

[2] In an exchange with trade union bodies the Commission claims there is no legal basis in the Services Directive to share information on notifications from the past. This matter will be pursued by Corporate Europe Observatory as there seems to be no basis in the directive to keep the information secret. This was brought to our intention by the European Public Services Trade Union (EPSU), who had pointed out that the Commission’s impact assessment contained “very few concrete references to actual regulations that are unjustified and disproportionate [..] Would other sources of information be available”. The Commission responded that “it is legally not possible […] to share with you ad hoc documentation on specific notifications”. The Commission did offer the unions to meet and discuss their concerns. Email from the Commission to the ETUC and EPSU, May 29 2017."