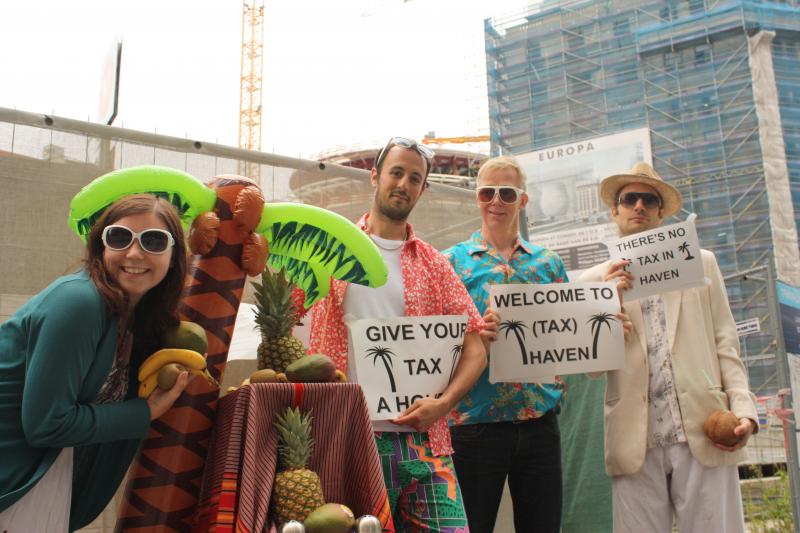 Brussels, 10 June.- A broad range of public interest groups1 have today sent an official complaint to European Commissioner Algirdas Šemeta about the newly-established Tax Platform, which they claim is “fundamentally compromised”. In a stunt staged this morning, as members of the platform arrived, they denounced the Commission for “putting foxes in charge of the hen house” when tackling tax dodging.

The complaint2 argues that the Tax Platform “is dominated by the same stakeholders who have been so effective in evading and avoiding tax, as well as those who have successfully invented new ways for their clients to do so.”

One of the signatories, Pascoe Sabido of Corporate Europe Observatory, said “Inviting tax dodgers and their advisers to instruct the Commission on tackling tax havens and other shady practices is like inviting foxes to guard the hen house. There's such a blatant conflict of interest that it must not come as a surprise when the foxes eventually eat all the hens.”

According to the signatories, the outspoken positions of the employers associations against a tough tax regime, as well as their cosy relationship with their tax advisers, makes it very difficult to believe they will bring a diversity of opinions, and particularly difficult to imagine that they would have an opinion that conflicts with their direct commercial interests and those of their clients, i.e. if they were to put in place measures to end tax evasion and aggressive tax planning.

“Public anger is rising over corporate tax dodgers and their advisers at a time when the Commission is imposing continued cuts to public spending because the public purse is empty. The public needs to believe the Commission is taking the problem of tax dodging seriously, and making sure these sorts of advisory groups are not captured by industry is a crucial part of it”, said Nina Katzemich of Lobby Control, Germany.

MEPs are also unhappy at the new Platform, with a cross-party group tabling a written question asking the Commission why so many industry representatives are in the group and how it intends to address the clear conflict of interest.3

“Research has shown tax dodging in the EU is worth as much as EUR 1 trillion per year, more than the combined health care budgets across all member states. If the Commission was serious about tackling the problem, it could pay off the deficit in under nine years and would no longer need to impose its painful austerity policies that are affecting public services”, said Leonardo Palumbo of European Public Health Alliance.

The complaint was sent this morning, to coincide with the first meeting of the Platform, taking place in the European Commission's Charlemagne building, in Brussels.

To mark the occasion, campaigners, playing the role of tax evading corporations, welcomed industry members with tropical fruits and palm trees, thanking them for their hard work so far in channelling profits to off-shore tax havens, and encouraging them to keep up the good work in this latest Tax Platform (see photos).4

Key extracts from the complaint