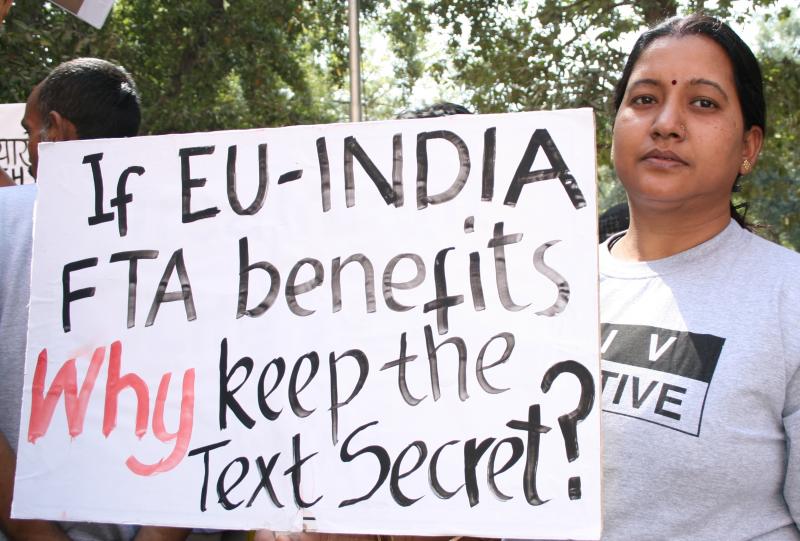 In a ruling delivered today following a lawsuit by lobby watchdog Corporate Europe Observatory, the EU’s General Court in Luxembourg concludes that the European Commission did not violate EU rules when withholding information about the EU-India free trade talks from the public, even though it had already shared the information with corporate lobby groups. Corporate Europe Observatory warns that this decision risks deepening the secrecy around EU trade negotiations and legitimises the Commission’s practice of granting corporate lobby groups privileged access to its policy-making, at the expense of the wider public interest.

The lawsuit, which was filed in February 2011, was a last resort for Corporate Europe Observatory after the Commission refused to fully release documents related to the EU’s ongoing trade negotiations with India, including meeting reports, emails and a letter, which it had sent to industry groups including the European employers’ federation BusinessEurope, one of the most powerful corporate lobby groups in Brussels. The Commission claimed that the censored information was 'sensitive' as it concerned EU priorities and strategies in the negotiations and argued that public disclosure would undermine the EU’s international relations.

Corporate Europe Observatory argued that the information, which the Commission had already shared with the business world at large, could not suddenly become confidential when a public interest group asked for it. The group accused the Commission of manifest discrimination in favour of corporate lobby groups and violating the EU’s access to information rules.

“There is a big risk that the Commission will see the court ruling as a green light to continue to develop its trade policy behind closed doors, together with, and for, a tiny elite of corporate lobby groups. The result is a trade policy that caters for big business needs, but works against the interests of the bulk of the population in the EU and other parts of the world.”

The judgement comes as the EU and India are reportedly sorting out their lastdifferences, in order to ink their final proposal for a free trade deal before elections in the EU and in India in 2014. On both sides, trade unions, farmers’ groups, patients' organisations and other civil society groups have repeatedly raised concerns about the potentially devastating impacts of the agreement, particularly on access to medicines and the livelihoods of Indian farmers and street traders.

CEO believes that the court ruling has potentially serious implications for other trade policies, such as the upcoming free trade negotiations between the EU and the US.

“Citizens and Parliamentarians are increasingly worried about the risks that the EU’s corporate trade agenda poses to food safety, digital rights and environmental protection. Trade negotiations should be conducted in an open and democratically-accountable way, and it is high time that the Commission stops handing over the negotiating agenda to multinational companies. It is disappointing that the court ruling seems to point in exactly the opposite direction”, stated Pia Eberhardt.

Corporate Europe Observatory will now carefully analyse the ruling and consider next steps. A potential appeal would need to be filed within two months and ten days.