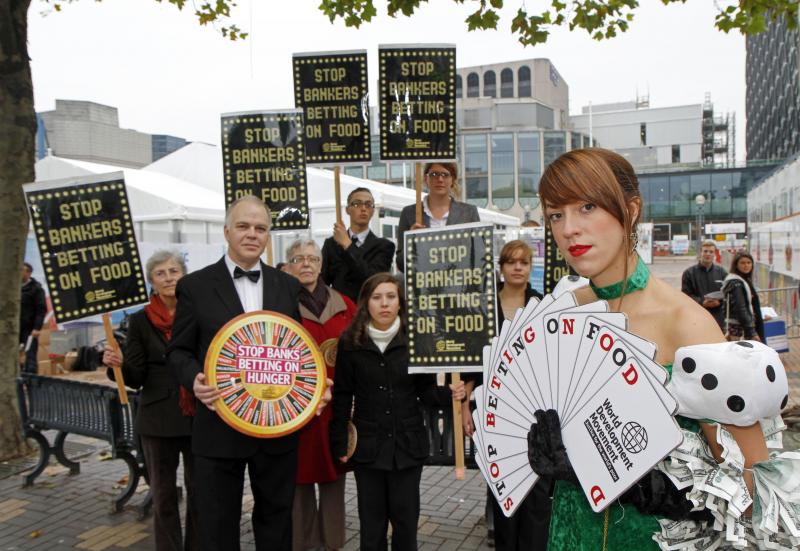 Little will be done to curb harmful food speculation today as EU finance ministers meet to approve their position on the new Markets in Financial Instruments Directive (MiFID II) – which sets new regulations for financial markets. According to a broad coalition of environmental and development organisations, loopholes in the legislation will render it ineffective to prevent food speculation, and the resulting food price spikes that hit the poorest the hardest.

Anne van Schaik, accountable finance campaigner at Friends of the Earth Europe, said: “Food speculation profits financial institutions, and costs the world's most vulnerable the food on their plates. Watertight regulation of food speculation is vital to prevent excessive speculation driving up food prices – but finance ministers have failed to agree effective controls, such as limits to the bets that speculators can make.”

Marc Olivier Herman, EU policy advisor at Oxfam, said: “EU governments failed to tackle the systemic risk that unbridled speculation poses to world food security. It is now crucial that the European Parliament takes a stronger position in upcoming negotiations on behalf of the millions in poor countries who are hit by high and unpredictable food prices, and for families in the EU who feel the impacts of rising food bills.”

The organisations expressed concern that European regulators will not set adequate EU-wide limits to the bets speculators can make and that limits may not be comprehensive or applicable to all types of traders – which will allow financial institutions to sidestep regulation.

Christine Haigh, policy officer at the World Development Movement said: “We are deeply concerned over the fact that in the current text, limits on speculation will be set at national level, rather than being consistent across the EU. This will pit the member states against each other in a ‘race to the bottom’ to set the weakest limits”.

Myriam Vander Stichele from SOMO said: “The new legislation will not be effective if there are no clear position limits on over-the-counter commodity derivatives or ‘swaps’, often linked to speculative trading. The US has put such limits into law and the EU must follow suit in order to prevent traders from avoiding these new rules. The EU has been giving in to too many demands from the financial services lobby.”

Discussions between the European Parliament and Council will continue with an agreed text due for adoption in March 2014, supported by the European Commission. The organisations identified eight of the most dangerous loopholes and outlined solutions1 – to ensure European policy-making puts the hunger of people before the greed of financial institutions and puts a stop to the damage done by financial markets through excessive and harmful speculation.