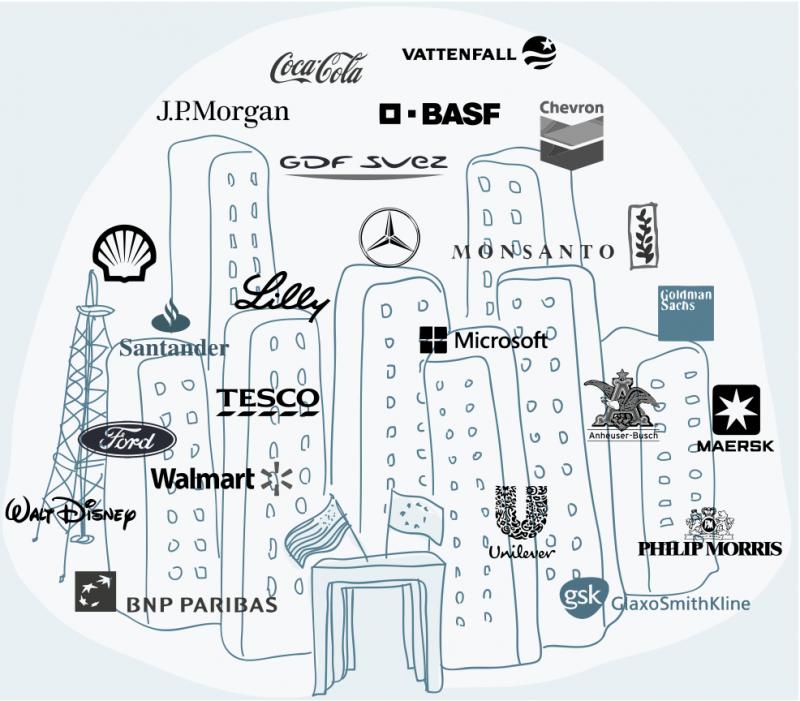 As the second round of negotiations on the proposed EU-US trade agreementkick off in Brussels next week, a new report published by the Seattle to Brussels Network (S2B) today reveals the true human and environmental costs of an EU-US Transatlantic Trade and Investment Partnership (TTIP/TAFTA). The report shows that the promises of job creation and growth are illusions; and that the real impetus behind a deal comes frommajor EU and US corporations that have joined forces to remove as many labour, health and environmental standards as possible in a devastating race to the bottom.

A Brave New Transatlantic Partnership highlights how the European Commission’s bold promises of up to 1% GDP growth and massive job creation through the EU-US trade deal are not supported even by its own studies, which rather predict a trivial growth rate of just 0.01% GDP over the next 10 years and the potential loss of jobs in several economic sectors, including agriculture.

The report also explains how the corporations are lobbying EU-US trade negotiators to use the deal to weaken food safety, labour, health and environmental standards as well as undermine digital rights. Attempts to strengthen banking regulation in the face of the financial crisis could also be jeopardised as the financial lobby uses the secretive trade negotiations to undo financial reforms such as restrictions on the total value of financial transactions or the legal form of its operations.

“Big business lobbies on both sides of the Atlantic view the secretive trade negotiations as a weapon for getting rid of policies aimed at protecting European and US consumers, workers and our planet”, said Kim Bizzarri, the author of the report. “If their corporate wish-list is implemented, it will concentrate even more economic and political power within the hands of a small elite, leaving all of us without protection from corporate wrongdoings.”

The report also warns that the investment chapter of a proposed EU-US trade agreement could open the floodgate to multi-million Euro lawsuits from corporations, challenging democratic policiesat international tribunals if they interfere with their profits.

To shine light on these unprecedented corporate privileges, the S2B network, Corporate Europe Observatory and the Transnational Institute, have also published today an updated analysis (A transatlantic corporate bill of rights) of the leaked Commission proposals for so-called investor-state dispute settlement under the proposed EU-US deal.

Pia Eberhardt, trade campaigner with Corporate Europe Observatory and author of A transatlantic corporate bill of rights, said: “The proposed investor rights in the transatlantic trade deal show what it is really about: It’s a power grab from corporations to rein in democracy and handcuff governments that seek to regulate in the public interest. It’s only a matter of time before European citizens start paying the price in higher taxes and diminished social protection.”

Both reports highlight how consumer watchdogs, digital rights and trade activists, environmentalists and trade unions are preparing to fight the corporate dystopia put forward in the EU-US trade deal.

Luis Rico of Ecologistas en Acción, a member of the Seattle to Brussels network said: “We hope that the disturbing evidence we provide will show why all concerned citizens and parliamentarians on both sides of the Atlantic needto urgently mobilise against the proposed EU-US trade deal. We have to derail this corporate power grab that threatens to worsen the livelihood of the millions of people already seriously affected by the financial crisis and by the crippling consequences of Europe's austerity reforms.”