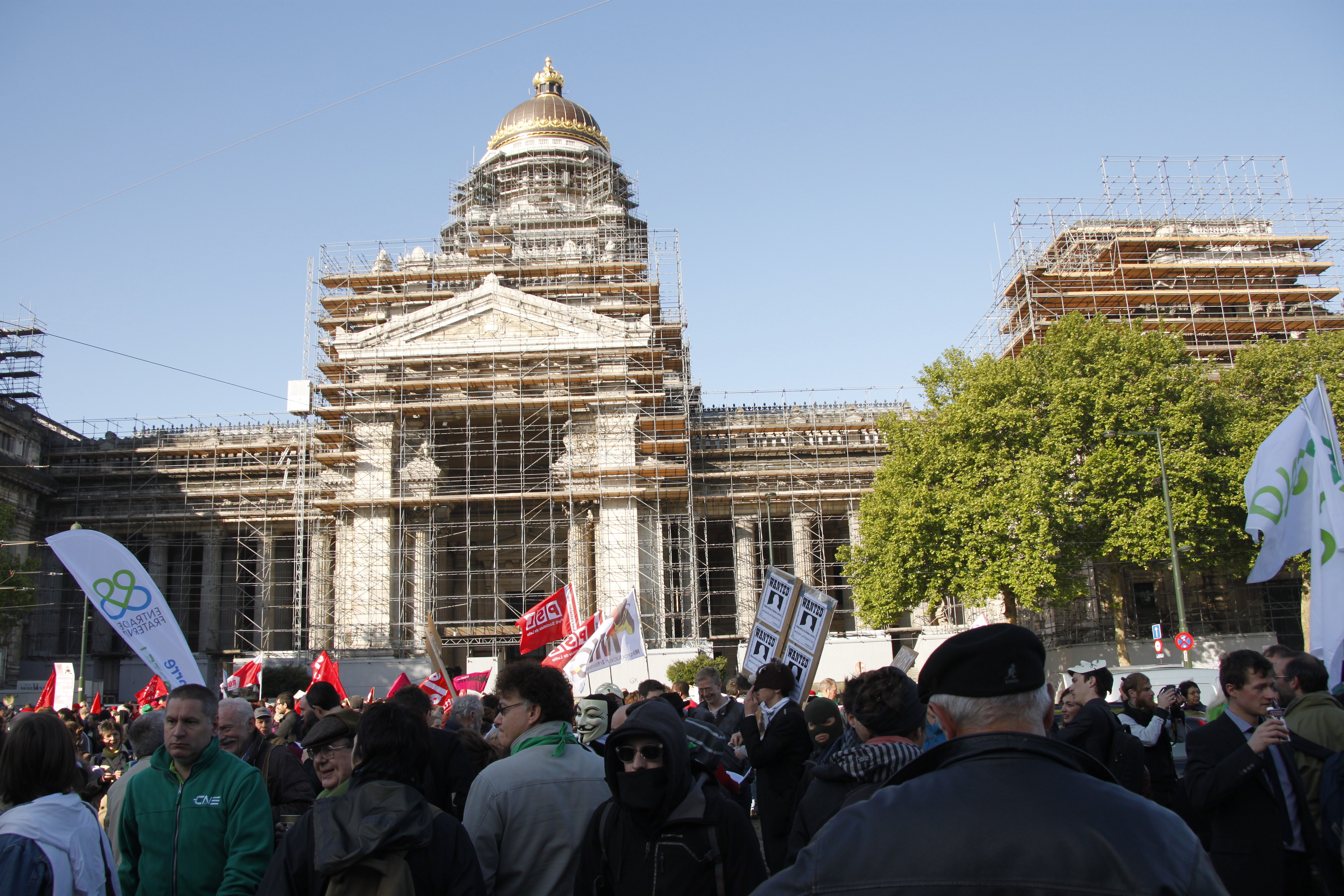 Farmers, trade unions and citizens belonging to the D1920 Alliance and Alter Summit 1 tried to shut-down Brussels' biggest corporate lobbying event this morning2, where many high-level political leaders were expected, in protest at big business dictating European policy while the voices of citizens are excluded.

“It's unacceptable that 10 days before regional, national and European elections, political and big business chiefs are colluding together to decide the future of Europe. But citizens had enough of a Europe made for high profits and social misery. Shutting down this lobbying jamboree is sending a clear message that democracy is not for sale at any price. We demand a Europe from below.” Said Rudy Janssens from Belgian public services trade union CGSP

Felipé Van Keirsbilck from Belgian trade union CNE added, “Why are we still letting those who caused the crisis decide how we respond to it? Banks and big business, rather than taking responsibility for wrecking the economy, have passed the cost on to ordinary citizens who have watched as compliant governments demolish public services and people's ability to earn a living. We don't owe so why should we pay? We need an alternative to austerity.”

Luc Hollands from Belgian milk producers cooperative MIG  said, “Rather than looking for solutions to the crisis in the interest of citizens, our so-called political leaders like EU trade Commissioner Karel De Gucht are trying to make big business even richer through secretly negotiated transatlantic trade deals. And again its citizens and producers who will suffer, with deregulation seeing public services sold off while dangerous foods make their way to a plate near you. Who wants to eat hormone-filled beef or chlorine-washed chicken?”

The police responded this morning by arresting hundreds of innocent citizens en-masse.

Pascoe Sabido from Corporate Europe Observatory said "Once again we have seen that the priorities of big business are placed above those of Europe's citizens. It's simply not acceptable to arbitrarily arrest peaceful protestors for trying to make their voices heard above the billions of dollars spent by multinational corporations on lobbying. Democracy is trully broken and it doesn't appear like our political leaders are in any hurry to fix it.

Noemi Costa from the Coalizione Centri Sociale and the Blockupy International Coordinating Committee said “By being here today we've shown that solidarity beyond borders is necessary and possible. This is another step in building a transeuropean movement to fight back against the neoliberal crisis policies coming out of Brussels. Up until the elections we will be in the streets, demanding the Europe that we really want.”

The surrounding of the European Business Summit is the start of a week of action 3 across Europe against painful austerity policies imposed from above. Over the next 10 days citizens, social movements, trade unions, migrants, youth, women and precarious workers will be taking to the streets in protest in Italy, France, Spain, Greece, Germany, Denmark and elsewhere.