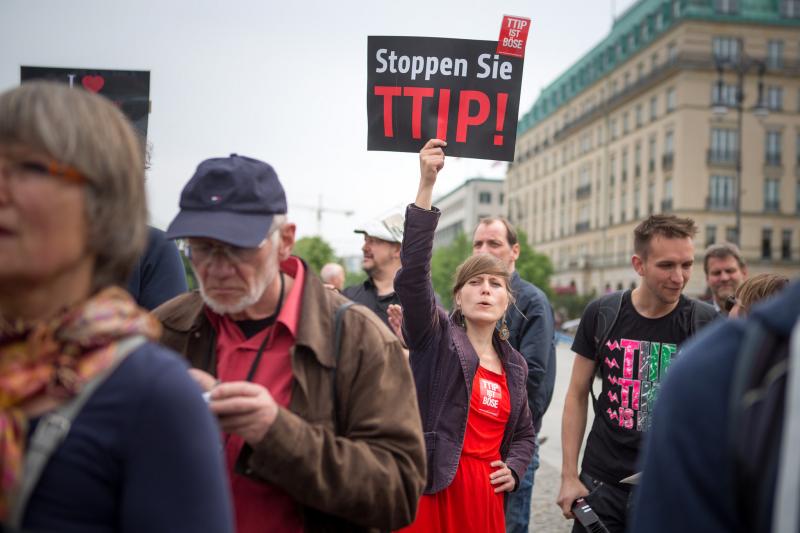 Campaigners from the Seattle to Brussels Network (S2B) [1] have criticised the European Commission’s consultation on investor rights in the proposed EU-US trade deal (Transatlantic Trade and Investment Partnership, TTIP) as a mockery of democracy aimed at selling its pro-industry agenda, rather than an honest attempt to listen to the people of Europe. The results of the consultation were published earlier today.

Paul de Clerck from Friends of the Earth Europe, a member of S2B, said: “The European Commission is showing its total disregard for the voices of people who mobilised en masse to express their opposition to VIP treatment for investors in the EU-US negotiations. Today’s announcement is yet more evidence that the TTIP negotiations are a dangerous Trojan horse driven by corporations at the expense of essential protections for people and the environment.”

In the face of fierce opposition to investor rights in TTIP, the Commission ran a public consultation on the issue in summer 2014. Nearly 150,000 people contributed – the highest number of responses ever for an EU consultation. An overwhelming majority (more than 97%) rejected the investor-state dispute settlement mechanism (ISDS) in TTIP and other EU trade agreements such as the already concluded EU-Canada Comprehensive Trade and Economic Agreement (CETA) [2]. The Commission’s response to the consultation suggests that these voices are being ignored while more consultations are being prepared [3].

Pia Eberhardt of S2B member Corporate Europe Observatory, said: “People have clearly spoken out against corporate super-rights in TTIP and CETA. But instead of listening to the people, the Commission is organising more consultations on TTIP and leaving dangerous investor rights in CETA untouched. How much further can disregard for democracy go?”

The Commission’s response also suggests that it considers its so-called reform agenda as developed in the CETA the way forward to address the concerns raised by citizens. But a recently published analysis of CETA’s investment chapter shows that the EU’s approach could expose the EU and its member states to a wave of corporate lawsuits that restrict the powers of all levels of governments and that it will establish an arbitration system that is far inferior to domestic legal systems in the EU and North America [4].

Marc Maes of the Belgian development organisation 11.11.11 (also S2B), said: "The Commission’s so-called reform agenda does nothing to address the basic flaws of the investor-state dispute settlement system. Foreign companies will continue to have greater rights than domestic firms and citizens. And international tribunals consisting of three for-profit lawyers will continue to decide over what policies are right or wrong, disregarding domestic laws, courts and democracy."

Campaigners also stressed that there was no need for the creation of a special legal regime to protect businesses from the consequences of their actions as they were capable of evaluating risk and the expected returns on that risk. Should the risk be too great, options such as private insurance or recourse to regular domestic courts were all readily available.

The Seattle to Brussels Network is encouraging civil society organisations and members of the public to step up the pressure on the European Commission, EU member states and the European Parliament in the next months so that investor state dispute settlement is buried once and for all.

[2] According to the Commission’s response to the consultation, 97% of the replies were submitted collectively through online platforms with pre-defined answers. Also see the media briefing Consultation or Cover Up? by Friends of the Earth Europe, published on 12 January 2014.

[3] While, in its response, the Commission claims that contributions to the consultation „were all taken into account as valid contributions“, it seems to disregard two categories of responses: opposition and concerns to TTIP in general and concerns or opposition with regard to investment protection/ ISDS in TTIP. For the first category, it states that „while taking note of these views, the further assessment for this consultation has to remain focused on the statements provided in relation to the specific aspects presented under each of the questions posed“. For the second category, it states that „this question should be answered, in light of the ongoing EU efforts to reform substantially investment protection and ISDS system and an assessment of such efforts“. This is a clear disregard of these contributions – despite the fact that people making them were well aware of the Commission’s reform agenda and therefore rejected this as well.

[4] See the report Trading Away Democracy. How CETA’s investor protection rules threaten the public interest in Canada and the EU, published by 15 civil society organisations in November 2014.