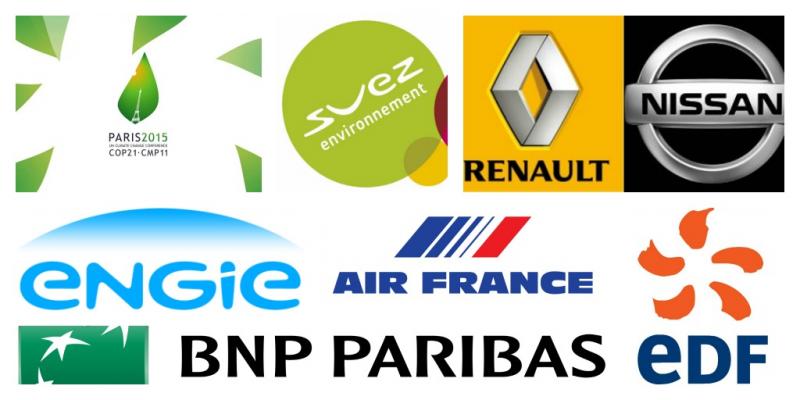 COP21 sponsors are not so climate friendly!

From the aeronautics and car industry, to fossil and nuclear energy companies - the list of sponsors for the 21st UN Climate Conference (COP21) released today includes some of the least climate-friendly multinationals. Corporate Europe Observatory joins Friends of the Earth, ATTAC France, WECF and 350.org in denouncing the organisers and highlighting concerns that the talks are being captured by big polluters.

As France prepares to host the COP21 supposedly charged with solving the climate crisis, the French government has given a worrying indication on the sincerity of his commitment today in unveiling its choice of sponsors. Among the twenty companies on the initial sponsors list are Air France - an airline opposed to emissions reductions in the aviation sector, car manufacturers Renault-Nissan, and Suez Environement - known for its pro-fracking lobbying. "Most of these companies are big emitters of the very greenhouse gases responsible for climate change, such as EDF or Engie whose coal plants alone are equivalent to nearly half of France's entire emissions. While the French government had said that they would look for businesses with flawless reputations, many of them are involved in projects harmful to people, their quality of life and work. Putting the most important climate conference of the decade under the patronage of climate-incompatible businesses does not bode well," said Malika Peyraut of Friends of the Earth.

COP21 sponsors will provide financial and practical contributions for the organisation of the talks despite the fact that the vast majority of their activities are extremely polluting and many of their proposals constitute false solutions to the disastrous environmental and social fallout from climate change. This is the case for BNP-Paribas, which, besides being the foremost French bank in terms of support for coal between 2005 and 2014, stubbornly refuses to leave tax havens and end its tax evasion practices. "The government is offering a cheap and easy opportunity for multinational climate criminals to green-wash their image. The public interest demands that these talks not be polluted by the private interests represented by these companies," said Maxime Combes of ATTAC France. "Would we entrust the fight against tobacco to cigarette manufacturers? Why do it for climate policy?"

The French government is aiming for 20% of the overall budget of COP21 to be privately financed. "20% of private funding is more than at the COP19 in Warsaw in 2013. Back then, NGOs, social movements and trade unions left the negotiations to protest the takeover of the talks by industry and polluting lobbies. We cannot negotiate a climate agreement with those who are responsible for climate change: states must listen to citizens' interests, and not the private interests of lobbies and multinationals," said Pascoe Sabido, Corporate Europe Observatory. In proposing this list of sponsors, the government is rejecting the signal which should be sent at COP21: solving the climate crisis means ending the era of fossil fuels, rejecting false solutions such as nuclear, and rethinking our consumption and production patterns.