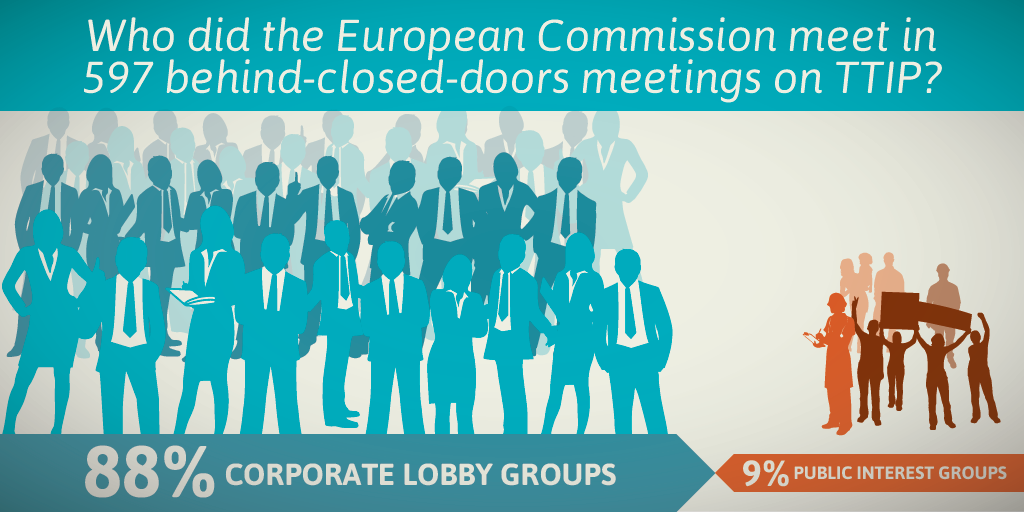 New research by lobby watchdog Corporate Europe Observatory and SumOfUs, a global consumer advocacy organisation, reveals that major corporations in the pharmaceutical and financial industries have dramatically boosted their lobbying efforts in support of the Transatlantic Trade and Investment Partnership (TTIP).

Corporate Europe Observatory and SumOfUs observe  a dramatic corporate bias in the Commission’s approach to the trade deal with the big business leaning not changing significantly since Cecilia Malmström took over as EU Trade Commissioner in November 2014.

According to the research, in her first six months in office, the Commissioner, members of her Cabinet and the director general of DG Trade had 122 behind-closed-doors lobby meetings in which TTIP was discussed. 100 of these meetings were with business lobbyists – 22 with public interest groups.

The research also aims to shed light on how agenda-setting for TTIP has been driven by Western European and US businesses while companies from Greece, Portugal, Cyprus, Malta, and Eastern Europe are not lobbying at all. Also, one in five corporate lobby groups meeting the Commission’s trade department on TTIP are absent from the EU’s Transparency Register, among them large companies such as Maersk, Levi's and AON as well as powerful federations such as the world’s largest biotech lobby group BIO and the Big Pharma lobby group PhRMA.

Pia Eberhardt, trade campaigner with Corporate Europe Observatory said: “This data justifies millions of citizens' concerns about the threats posed by TTIP. While big business lobbyists are kept firmly in the loop and exert a powerful influence over the negotiations, public interest groups are kept at bay. The result is an agenda for TTIP that calls into question key standards and rights for citizens and the environment while dramatically expanding business power over politics in both the EU and the US.”