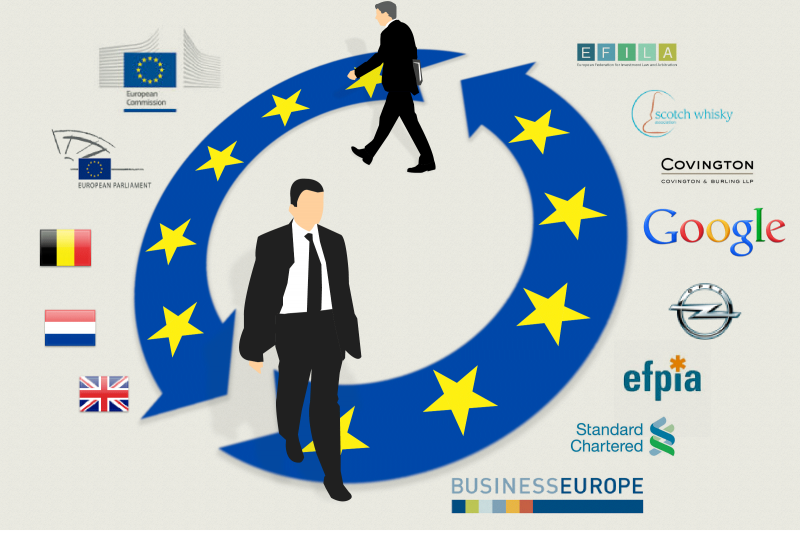 As the 10th round of TTIP talks continue this week, CEO documents a variety of revolving door cases including a commissioner, MEPs and officials with links or interests in TTIP at the European or national levels. Some of the biggest corporate lobby players - such as BusinessEurope, Google, Opel and gplus - are implicated.

“There are major questions surrounding the weakness of revolving door rules to tackle the risk of conflicts of interest from occurring at the EU and national levels - indeed, some countries and institutions, including the European Parliament, have zero revolving door rules,” said CEO researcher Vicky Cann.

“Considering the lack of transparency in this area, the cases we feature here are likely to be only the tip of the TTIP of the iceberg. We're calling for upgraded and properly enforced standards. For example, former commissioners and senior officials should face a three year ban on lobby jobs or any other job which provokes the risk of a conflict of interest. Other Commission officials and MEPs should face a two year cooling-off period and member states should raise their game on this issue too,” she added.

Set to become the biggest trade deal in the world, TTIP is at the centre of a massive lobby battle taking place in Brussels. Possible private arbitration and the harmonisation of EU and US laws offers a bonanza for big business and threatens to undermine consumer protection, sustainable agriculture, environmental standards, and labour rights.

The publication of this report on the role of the revolving doors problem in this battle comes as CEO launches new data on who is lobbying for TTIP and how they are influencing policy makers. The data and accompanying infographics (links) confirm that corporate contacts with the Commission massively outweigh those of NGOs, trade unions, and others representing public interests.