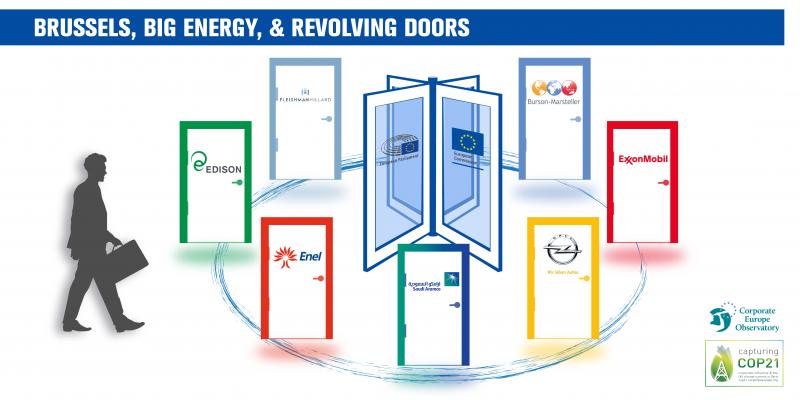 Conflicts of interest in the field of energy and climate policy are being ignored by EU institutions allowing some of the world’s biggest polluters to potentially benefit from the know-how and contact books of top Brussels insiders, according to a new report.

“Brussels, big energy, and revolving doors: a hothouse for climate change” by Corporate Europe Observatory (CEO) examines cases of EU public servants and elected representatives who have gone through the revolving door to corporate jobs with links to the fossil fuels industry or those who represent them. The report also explores cases where officials and special advisers have joined the Commission from roles in major energy outfits. Five new cases are highlighted which show how blasé the institutions are about the risk of corporate capture of EU energy policy by Big Energy. In total the report highlights 16 problematic revolving door moves by former MEPs, a former Commissioner, special advisers and officials with close ties to EU climate and energy policy.

“The close ties between Big Energy and senior decision-makers, facilitated by the revolving door, are extremely worrying,” says CEO campaigner Vicky Cann. “The fact that so many of these revolving door moves have been officially authorised shows the institutions' total lack of understanding of conflicts of interest and the risks generated by the revolving door. As the planet faces a looming catastrophic climate crisis, we need strict rules and a major change of culture to tackle the hothouse of energy industry lobbying, privileged access for polluters, and ever-spinning revolving doors that are so prevalent in key EU institutions.”

Among the report’s recommendations are calls for an overhaul of revolving door rules at the EU and member state levels, new safeguards to prevent conflicts of interest involving Commission special advisers, a two year cooling-off period on taking paid lobby work for former MEPs, and a vastly improved lobby transparency regime in Brussels.

The report can be read here: http://corporateeurope.org/revolving-doors/2015/11/brussels-big-energy-and-revolving-doors-hothouse-climate-change