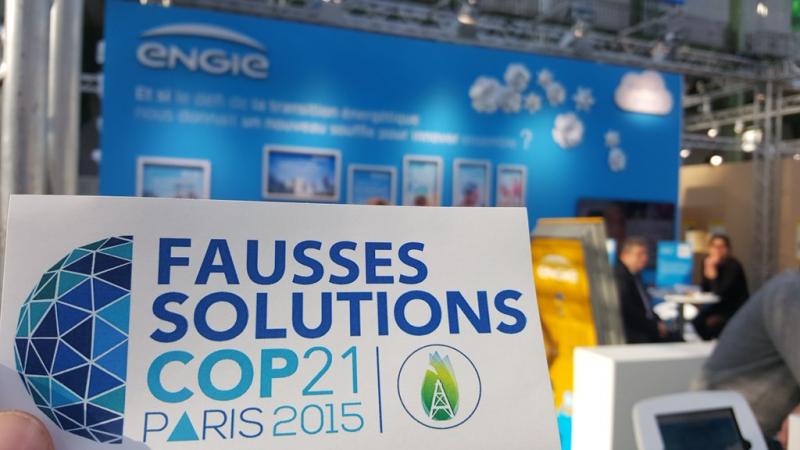 Hundreds of activists took part in an action today to denounce the false solutions peddled by corporations in Paris during COP21.

Inside the Grand Palais, currently host to the corporate-expo 'Solutions COP21', an unauthorised 'toxic tour' was organised to expose the polluting reality behind many of the event's sponsors, including Engie, Avril Sofiproteol and Suez Environment. Many creative and peaceful actions also took place inside and outside the event.

Many were refused entry, but those on the tour heard testimonies from communities fighting the companies in their respective countries, peeling back the greenwash on display at Solutions COP21 and exposing their destructive business practices.

Tour guides, participants and many journalists were kettled by police and security and forcibly removed.

“Peaceful and creative actions, including a sit-in at the exhibit of coal and gas-giant Engie, has wrecked the opening day for companies pushing false solutions, but for those fighting them on the front lines and all those standing in solidarity, it was a huge success,” said Pascoe Sabido of Corporate Europe Observatory.

While COP21 negotiations continue on the issue of funding for adaptation in developing countries, fossil fuel companies who receive billions in public subsidies and divert money from energy transition projects towards their tax havens, are parading false solutions to climate change at the Grand Palais expo centre in Paris.

“The likes of Engie, Avril Sofiproteol, Coca Cola and Renault-Nissan have paid thousands to be in the Grand Palais as they think it's the best way to greenwash their polluting ways while continuing with business as usual. There's no way big corporations are part of solution. Real solutions are already being implemented by communities on the ground,” said Ronja Heise, of Corporate Europe Observatory.