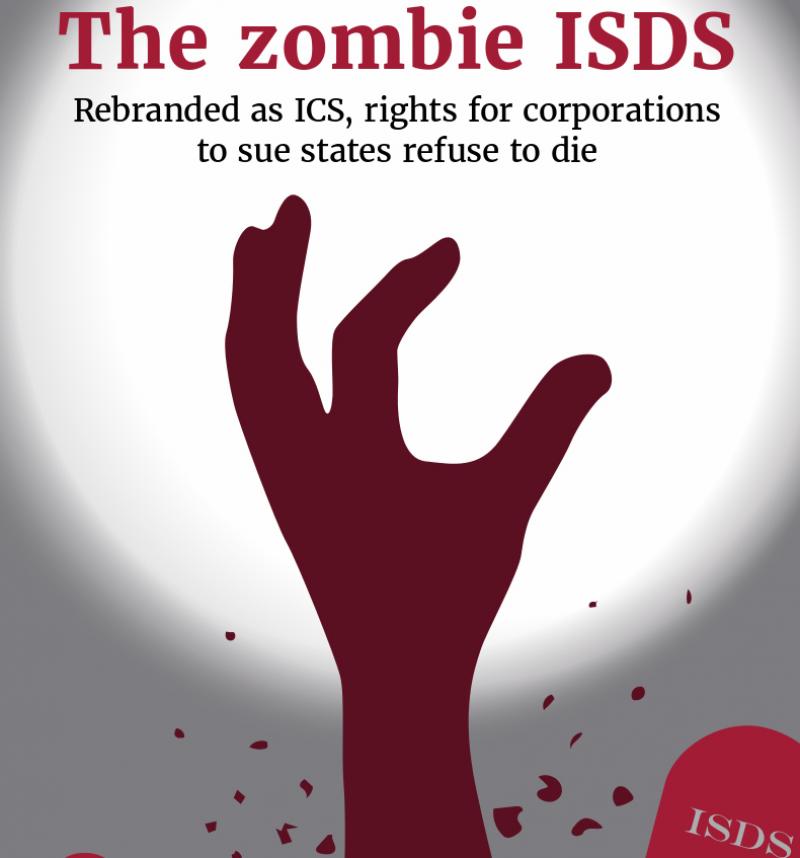 The European Commission’s “new” investor protection proposal brings the same controversial corporate super rights back from the dead according to a new report by Corporate Europe Observatory and 16 other organisations1. The study’s release comes just before talks on this controversial issue resume in Brussels for the first time after a two year halt.

“The zombie ISDS – rebranded as ICS, rights for corporations to sue states refuse to die” shows how the push for foreign investor privileges in EU trade talks such as the proposed EU-US TTIP2 deal continues as the Commission attempts to rebrand the politically untenable investor-state dispute settlement (ISDS) as an “Investment Court System” (ICS). An unprecedented Europe-wide controversy over the democratic threat posed by ISDS led to last autumn’s rebranding of ISDS as ICS in an attempt to get around the enormous public opposition to legal privileges for multinational corporations.

However, the report shows that under ICS, liability and financial risks would multiply for EU member states as 19 more EU countries could directly be sued by US investors, compared to only nine with an investment treaty with the US today. Over 47,000 companies would be newly empowered to sue (compared to around 4,500 today) and TTIP could invite the launch of nearly 900 US investor lawsuits against EU countries as opposed to 9 claims known under existing treaties.

The report also includes a case study on the stunning US$15 billion damages claim against US President Obama’s rejection of the controversial Keystone XL oil pipeline by Canadian pipeline developer TransCanada.3 It shows that TransCanada’s lawsuit – like other investor claims against measures to protect health, the environment and other public interests – would be perfectly possible under the ICS as it includes the same far-reaching investor rights relied upon by TransCanada in its claim against the US.

“Like a zombie back from the dead, for the first time in two years ISDS will be back on the TTIP negotiation agenda next week. But what the Commission proposes is exactly what people have already rejected: extreme privileges for corporations, which will empower them to claim billions in compensation when laws and regulations undercut their ability to make money. The egregious investor attacks against the public interest, which have provoked public opposition to ISDS would be perfectly possible under the new Commission proposal.”

“Some MEPs want to update the EU-Canada CETA4 deal with this ‘new’ ISDS approach. But the Commission’s ‘new’ ISDS model is as dangerous for democracy, public interest legislation, and taxpayer money as the ‘old’ model enshrined in the EU-Canada CETA deal. The rebranded version contains the same dangerous investor privileges, often in wording identical to the CETA text. We must not be fooled by falling into this PR trap – special rights for multinationals and the rich are unacceptable, in whatever disguise.”