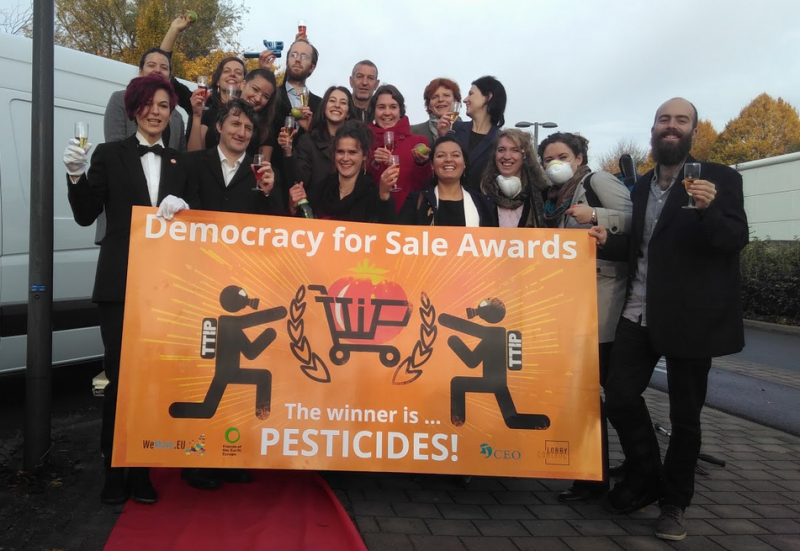 After winning the Democracy for Sale Award as the worst corporate lobby actor on TTIP, the pesticide industry’s EU lobby group European Crop Protection Association (ECPA) announced they would transfer money to co-organiser Corporate Europe Observatory (CEO). CEO has so far not been able to register this transaction, but will of course return the money to ECPA if it ever arrives, as we never accept corporate funding.

Together with Friends of the Earth Europe, LobbyControl and WeMove.eu, Corporate Europe Observatory organised this year's Democracy for Sales Award, an initiative which saw 44,381 citizens from across Europe cast their vote for the lobby association which most successfully captured the EU's position for the TTIP negotiations. The objectives of the nominated lobbies stand in stark contrast to public interest legislation, making their lobbying on TTIP yet another way in which they erode the democratic process for corporate gains.

With 15,027 votes, the pesticides lobby - namely the European Crop Protection Association and CropLife America* - came in first place, due to the highly privileged access to EU decision-makers and TTIP negotiators they have enjoyed. Tuesday, 1 November, one of our co-organisers on behalf of all organisations notified ECPA of its win, after they had previously been made aware of their nomination on 1 September.

Late Wednesday afternoon, 2 November, we received an email from ECPA that was also published on their website, stating that they would "deline [sic] to accept the award". Failing to realise that the awards scheme was a collaboration between four different organisations that only counted individual citizens' votes to determine a winner, ECPA mistakenly singled out CEO as the lone organiser and claimed we had "selected" them as laureates.

ECPA went on to argue they could not accept the Democracy for Sale Award, as any corporate lobby group would merit the same access to decision-makers as any other interest group. This is particularly rich coming from a lobby association that had early, highly privileged access to EU decision-makers on the EU TTIP position and which pushed its agenda on them behind closed European Commission doors. The democratic decision-making process should indeed be transparent and participatory, neither of which was the case in the context of TTIP, as the European Commission worked hand in hand with lobbies such as ECPA, while civil society and citizens were blanked.

In a sorry attempt to discredit our work in particular and the Democracy for Sale Awards scheme in general, ECPA then highlighted a financial transfer they claimed to have made to CEO's bank accounts. We have so far not been able to register this transaction, but will immediately return the money to ECPA once it comes through. Had they ever engaged with CEO's mission and values, they would have known that we never accept corporate funding in order to maintain our independence and integrity.

“ECPA’s move to send money to an organisation they perceive as an opponent illustrates very well their corrupt philosophy and the bizarre approach to public debate.

“In the context of their winning the Democracy for Sale Award this is particularly ironic and reveals their justified fear of criticism founded on thorough, independent research”.

As for ECPA's insistence that pesticides have unjustly gained a bad reputation and that the association represents a "fundamentally good" industry, a reference to their client Syngenta suing the EU for banning wildlife-devastating neonicotinoids should suffice to expose the misleading sham that is ECPA's public relations strategy.

Notes to Editors:
Corporate Europe Observatory (CEO) is a research and campaign group working to expose and challenge the privileged access and influence enjoyed by corporations and their lobby groups in EU policy making. Corporate Europe Observatory receives donations from individual supporters as well as grants from a number of trusts and foundations. CEO accepts neither corporate funding, nor funding from the EU or other governments.

*Correction: 6 November 2016
This was changed from "CropLife Europe" to "CropLife America" to correct an editing error.