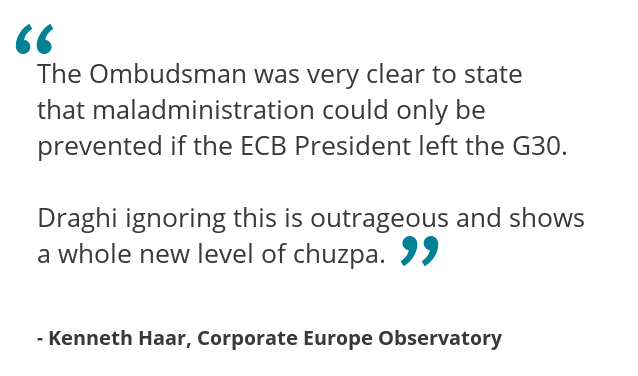 The European Central Bank (ECB) today rejected calls for its President Mario Draghi to suspend his membership of banking lobby forum the Group of 30 (G30). This decision clashes with the European Ombudsman’s recent recommendation for ECB decision-making bodies to avoid – even the perception of - conflicts of interest, as well as close association with special interest groups.

In Corporate Europe Observatory’s (CEO) view, the G30 bears too great a resemblance to a lobby group representing vested interests, which renders ECB President Mario Draghi’s membership unacceptable. A complaint by CEO had triggered the Ombudsman’s investigation into the matter.

“The ECB’s refusal to end Draghi’s G30 membership is a strong reminder of just how carelessly the bank deals with financial lobbyists. Avoiding secretive meetings with representatives of big banks, some of which are even supervised by the ECB, should be a no-brainer.

“The Ombudsman was very clear to state that maladministration could only be prevented if the President left the G30. Draghi ignoring this is outrageous and shows a whole new level of chutzpah.

“His response to the Ombudsman’s recommendations comes across as an auto-reply, key arguments are ignored, old defences are used to deflect responsibility. This should be a call to action for governments concerned about the fate of the EU banking sector.”

Corporate Europe Observatory is now considering next steps and will certainly continue monitoring the G30.