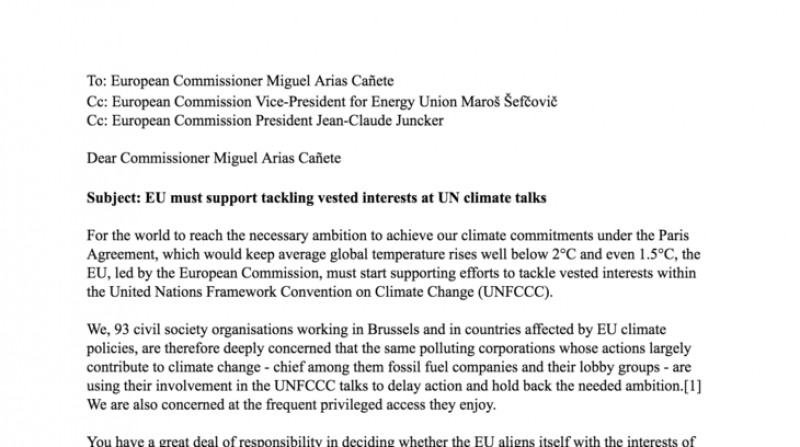 As EU environment ministers meet in Bulgaria to discuss the upcoming UN climate negotiations, 93 civil society organisations from Europe and across the globe have joined forces to demand a conflict of interest policy for all future UN climate talks. In a joint letter sent today to the European Union’s lead climate negotiator, EU Climate and Energy Commissioner Miguel Arias Cañete, they call on the EU to support efforts tackling vested interests at these UN conferences.

Despite their large contribution to climate change and resulting conflicts of interest, fossil fuel corporations and their lobbies have continued to be heavily involved in the negotiations around the United Nations Framework Convention on Climate Change (UNFCCC), pushing for false solutions and obstructing effective action. Curbing the influence of vested interests at the UN climate talks is essential for keeping the average global temperature rise well below 2°C, let alone 1.5°C, the key commitment under the UNFCCC’s Paris Agreement.

Countries representing nearly 70 per cent of the world’s population have long been calling upon the UNFCCC to introduce a rigorous policy framework to prevent conflicts of interest. They have been joined by numerous civil society organisations in the global South and North representing youth, indigenous people, women, and those on the front lines of climate change.

Environmental and citizens’ groups including Corporate Europe Observatory, Friends of the Earth Europe, The European Public Health Alliance, Greenpeace EU and the European Environmental Bureau are leading the EU-level call ahead of this year’s intersessional negotiations on the UNFCCC in May - the next opportunity to address the influence of the fossil fuel industry at the UN climate talks.

“Countries at the front lines of climate change and the global civil society movements supporting them are not alone in demanding the UN curb conflicts of interest at its climate change conferences. While the European Parliament recently passed a resolution with the exact same requests, the EU Commission continues to block progress on this issue - alongside historic polluters like the USA and Australia.”

“While oil and gas companies are publicly speaking about their commitment to the Paris Agreement, we see them obstructing strong climate policies behind the scenes and lobbying for measures like Carbon Capture and Storage that let them off the hook. As long as these companies have such excessive influence over negotiators, we will not see a fossil free world and will not be able to keep global warming under 1.5°C.”

“There is already a very good example for a successful conflict of interest policy at the UN level. Vested interests have been blacklisted under the United Nations Framework Convention on Tobacco Control, in order to protect public health policy-making from the influence of the tobacco industry and its lobbyists. The parallel to the fossil fuel lobbies’ influence in climate policy is very clear - climate change is, after all, also a major threat to global public health.”