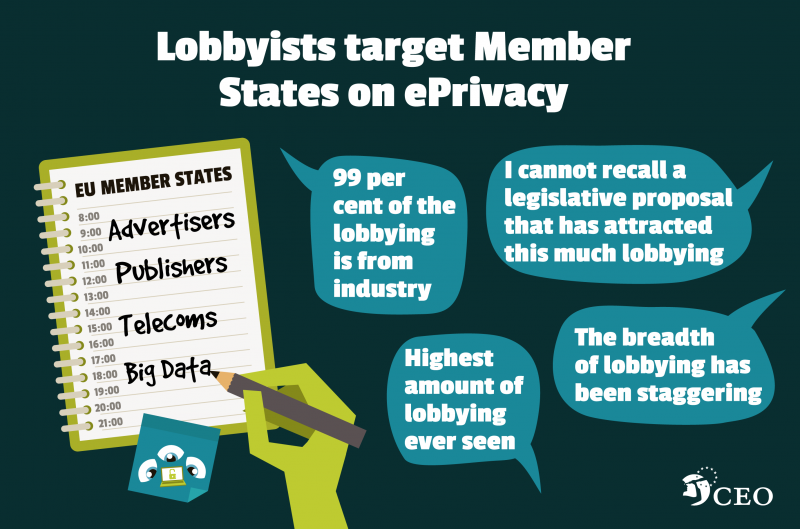 In battle for ePrivacy, Council of EU set to side with advertisers, telecoms and Big Data

Since the EU’s new General Data Protection Regulation (GDPR) has come into force, ePrivacy is now the new online data security frontier in the European Union. Corporate Europe Observatory’s new research shows how proposed rules are being watered down by EU member state governments in the Council of the European Union, following a deluge of industry lobbying.

On the one side of the privacy rift there are citizens, the European Commission and Parliament, all in favour of tougher rules to protect people’s online privacy by default, rather than on request. On the other side are the telecoms industry, advertisers, publishers, Big Data companies and many others in the digital economy - as well as EU governments who appear to be caving in to coordinated industry lobbying efforts in Brussels and national capitals.

Interviews with Brussels-based member state representatives have confirmed the diversity and intensity of corporate lobbying advances, while analysis of recent documents has underlined the lobbies’ impact on the Council’s emerging position. Despite the continuing opacity regarding member states’ precise positions on ePrivacy, central issues like metadata processing (of interest to telecoms companies), as well as privacy by design and consent issues (of particular interest to advertisers, publishers and Big Data) see the Council leaning towards a much stronger pro-industry stance than either the Parliament or Commission.

“The scale of corporate lobbying on ePrivacy is huge and while user interests should obviously be at the heart of the new regulation, emerging Council positions now echo industry demands on central issues such as the processing of metadata, consent, and privacy by design. Like so many other files, the passage of the ePrivacy dossier through the Council of the EU shows the lack of real accountability to citizens and the institution’s opaque decision-making process.