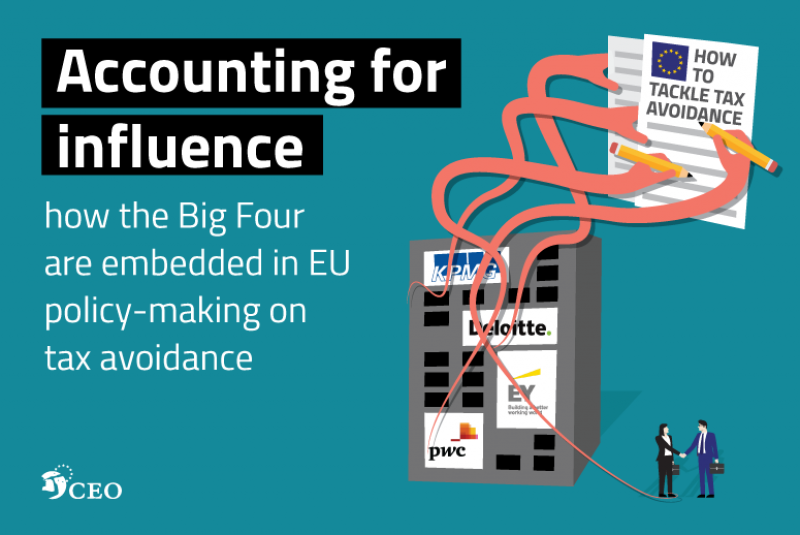 The Big Four accountancy firms Deloitte, EY, KPMG, and PricewaterhouseCoopers (PwC) facilitate and profit from corporate tax avoidance, but are still regarded by the European Commission as objective and legitimate advisers on policy responses to tax avoidance, a new report by Corporate Europe Observatory shows.

The Big Four are the goliaths of the tax planning world, auditing and advising many of the EU's biggest corporations. They are an integral part of what has emerged as the tax avoidance industry, a sector which every year costs the EU billions in lost tax revenue and funding for public services.

But at the EU level, these firms wield considerable influence over EU policies meant to fight tax avoidance. From the European Commission's public procurement contracts, to sitting on Commission advisory groups, working through lobby groups to promote positions on key dossiers, and through the revolving door, the Big Four are leaving their mark on anti-tax avoidance policy-making.

"If we want corporations to pay their fair share of taxes, we must create a firewall between policy-makers and the tax avoidance industry. There is an inherent conflict of interest when the Big Four sell corporate tax avoidance schemes and simultaneously get to advise on the EU's fight against tax avoidance. Recognising this as problematic must be the first step."

With a case study of Public Country By Country Reporting (CbCR), the report shows the substantial leverage which the big accountancy firms, together with major business interest groups, have had over what could become a key tool to thwart corporate tax avoidance. The proposal intends to force corporations to pay tax where they generate profit, rather than shifting profits to tax havens, by requiring them to publish information on every country they operate in.

All Big Four firms rejected the notion that this information should be made public by the EU, for reasons of "commercial sensitivity" (EY), or were in favour of a voluntary scheme (Deloitte). The Commission's proposal has been amended by the European Parliament to feature a major get-out clause for big business, following vehement efforts by lobby groups like the American Chamber of Commerce to the European Union, whose tax policy group is led by PwC. Now stuck in the Council, member states are divided on the file.

"Look closely and you can spot the fingerprints of the Big Four, the wider tax avoidance industry, and business lobby groups all over the EU's dossier on Public Country By Country Reporting. There is a significant risk that the file will be delayed or weakened further. In the interests of public budgets and tax justice, the EU must kick the tax avoidance industry out of policy-making processes meant to defeat this very industry. Tax avoidance facilitators have no place at the table."