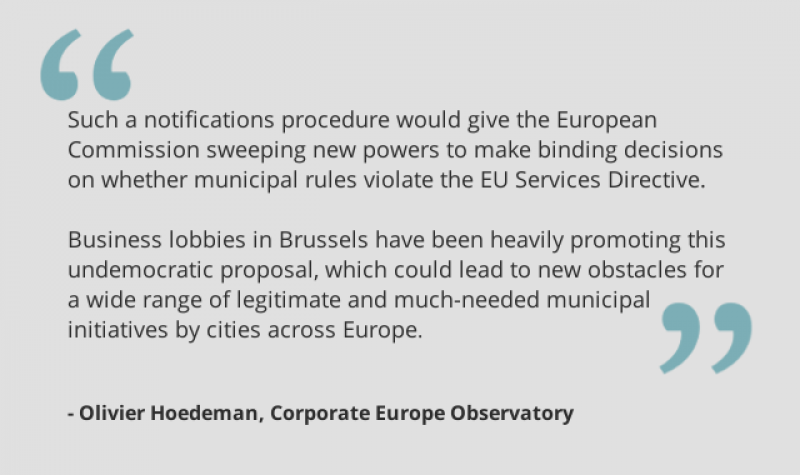 The European Commission’s proposed ‘Services Notification Procedure’, part of the revision of the EU Services Directive also known as the “Bolkestein Directive”, would require public authorities, including municipalities, to apply to the Commission for advance approval of any new rules affecting services. This would create big hurdles for municipalities wanting to introduce progressive city-level initiatives, such as affordable housing protections that regulate short-term rental platforms like AirBnB or facilitate the de-privatisation of energy supply.

Rejecting the proposed directive as “disproportional and at odds with the subsidiarity principle”, the letter underlines that “cities have a crucial role to play in solving Europe’s social and environmental problems and in deepening democracy with active citizens’ engagement”. For the broad coalition behind the text, “the proposed Services Notification Procedure would restrict the democratic space of municipalities and is therefore completely unacceptable.”

Olivier Hoedeman of Corporate Europe Observatory said: “Such a notifications procedure would give the European Commission sweeping new powers to make binding decisions on whether municipal rules violate the EU Services Directive. Business lobbies in Brussels have been heavily promoting this undemocratic proposal, which could lead to new obstacles for a wide range of legitimate and much-needed municipal initiatives by cities across Europe”.

The initiative for the protest letter emerged from the “Municipalize Europe!” conference which took place in Brussels last week and saw city councilors from Barcelona, Amsterdam, Grenoble, Naples, Paris and other cities debate ways to overcome and tackle hurdles to progressive municipal policies.

In September 2018, Amsterdam was the first city council to pass a resolution against the proposed notification procedure, stating that it creates unnecessary delays and “seriously harms the autonomy of local governments and therefore poses a threat to the local democracy.”