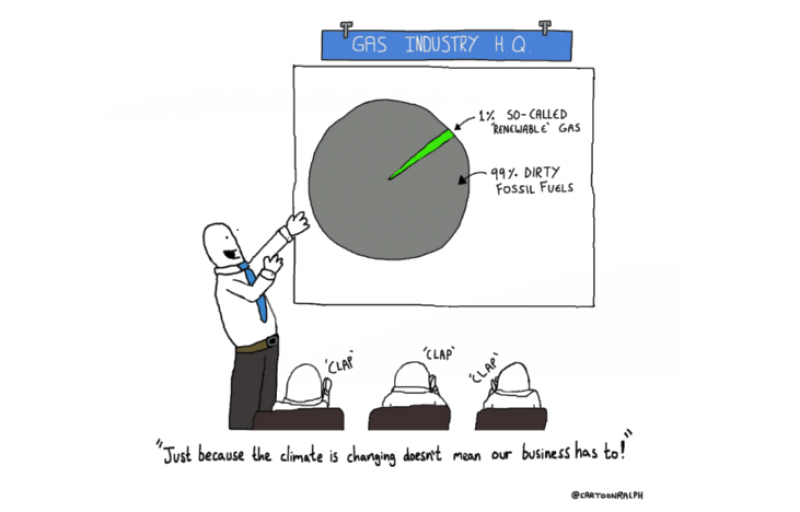 Ahead of the European Commission announcing its ‘2050 Climate Strategy’ for complying with the targets set out in the Paris Agreement, Corporate Europe Observatory (CEO) today released a two-part briefing (Part I, Part II)  on the gas industry’s attempts to promote so-called ‘renewable gas’ in the EU strategy.

Although ‘renewable’ and ‘low carbon’ gases are currently hyped as a way to make the gas industry ‘Paris compliant’ by 2050, these gases are in fact neither green nor sustainable.

Part one of CEO’s new briefing dispels the misleading industry claims which are proving to be a dangerous distraction from effective climate action and risk to lock the EU into extended fossil-fuel dependency.

The second part of the briefing exposes some of the central lobbying tactics and aims of the gas industry, which is trying to influence decision-makers at the EU level and in member states. Among the gas lobby’s activities are the active discouragement of support for renewable electricity in favour of ‘renewable’ gas, organising field trips for DG Energy Directors, hiring respected environmental consultants to lead lobbying efforts, buying media coverage in the Brussels bubble, and the co-optation of parts of the EU NGO sphere.

In its briefings, Corporate Europe Observatory also traces national level developments in France, the Netherlands, UK, Germany and Austria and publishes evidence of the European Commission directly approaching the gas industry to encourage a turn to ‘renewable gas’ - an early and devastating indication of the Commission’s internal bias and its willingness to assign a key role in its 2050 Climate strategy to the gas industry.

“The gas industry’s support for so-called renewable gas is a thinly-veiled attempt to keep fossil fuels at the heart of the EU’s expected 2050 climate strategy. Although their claims have been exposed as misleading, a combination of industry lobbying and the EU Commission’s clear pro-gas bias means the strategy is unlikely to live up to commitments under the Paris Agreement.

“Rather than fall for the dangerous distraction of renewable gas, the EU should be planning how to wind down the gas industry. But as long as its lobbyists have such a strong grip over policy-making, forward-thinking ideas remain impossible. We need a firewall that protects EU and national level decision-makers from gas industry lobbyists if we are serious about tackling the climate crisis.”