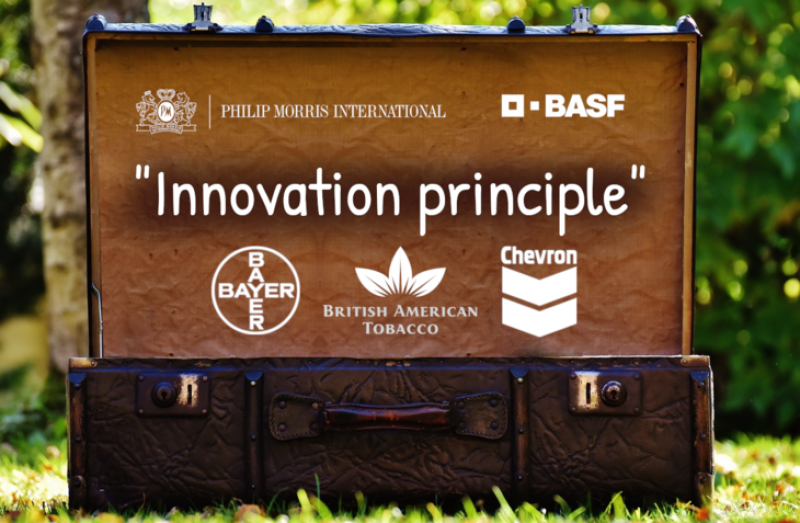 When the EU Parliament votes on EU research funding policy Horizon Europe this week, the plenary will also be deciding whether to include a so-called ’innovation principle’. New Corporate Europe Observatory research reveals that this ’principle’ originates from lobby groups representing the chemical, tobacco, and fossil fuel industries, and, if adopted, would help corporations undermine EU health and environmental protections.

The ’innovation principle’ presents a new form of impact assessment, allowing industry to force decision makers to take into account the alleged impact on innovation, “whenever policy or regulatory decisions are under consideration”. Documents released to Corporate Europe Observatory by the EU Commission show that the business lobby groups’ real aims are to weaken the EU’s chemicals regulation (REACH) as well as EU rules for pesticides, novel foods, pharmaceuticals and biotech products, and to attack the precautionary principle.

The origin of the ’innovation principle’ lies with corporate lobby platform the European Risk Forum (ERF), representing the chemical, tobacco and fossil fuel industries, which has been promoting the concept with the help of leading business lobbies BusinessEurope and the European Roundtable of Industrialists.Although it represents the tobacco industry, the ERF has enjoyed a great degree of privileged access to the European Commission and several EU Presidencies, when pushing to have its ‘principle’ included in official documents. The Dutch Presidency was instrumental in getting it adopted into Council conclusions.

The precautionary principle and the need for high standards of consumer and environmental protection are enshrined in the EU Treaties, and encourage innovation in the public interest. In contrast, the “innovation principle” is not a principle of law but a mere product of corporate lobbying. Including it in Horizon Europe would be unjustified and harmful. More immediately, its adoption would risk to force even more EU-funded research projects towards the narrow commercial interests of some big companies, rather than see the Horizon Europe budget of €100 billion (2021-2027) used for research projects tackling broader societal needs.

“The 'innovation principle' is a trap, a disguised lobby tool invented by the chemical, tobacco and fossil fuel industries to attack those EU safety rules meant to protect people and planet from harmful products.

“Including it in Horizon Europe would significantly boost industry influence over key EU environment and public health safeguards and would exacerbate the prioritisation of corporate interests in the EU’s legislative processes.

“Despite its name, this ‘principle’ has nothing to do with genuine innovation that benefits the public interest. We need funding policies that enable researchers to help address the great challenges our society faces, not ones filling corporate R&D budgets that have the primary purpose of creating shareholder value.”