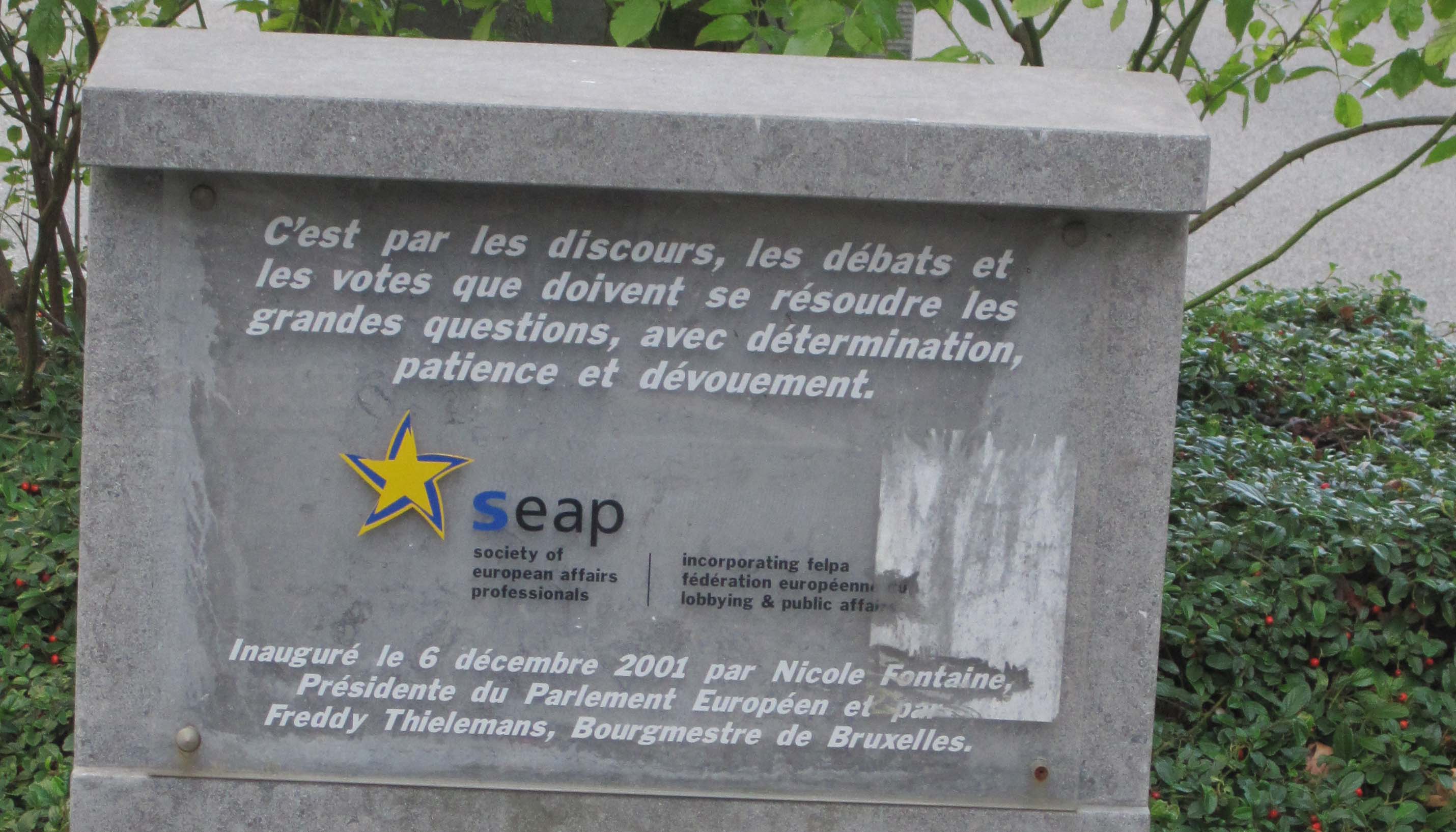 A number of former MEPs are still active inside the Parliament, lobbying on issues they previously worked on while in post. Their networks inside the EU institution are invaluable to consultancy firms, PR agencies, and the companies which actively headhunt and recruit them. They know how the system works, who to talk too, and how to best influence their former colleagues.

The Lisbon Treaty, introduced in 2009, substantially increased the Parliament’s legislative power, making MEPs even more attractive to consultancy firms. The Parliament can now accept, amend or reject the content of European legislation that affects every European – making its decision makers worth knowing.

Its new powers mean that greater scrutiny, transparency and accountability are required to minimize any potential conflict of interest and corruption.

“Lobbyists write amendments. This is known. For instance, I received the same amendment from dozens of different MEPs from different groups on my report on CO2 emission regulation. Their wording was identical,” Rebecca Harms, co-president of the Green party, told Corporate Europe Observatory (CEO), adding: “There are too many lobbyists and it's difficult to understand who exactly they are working for.”

Gary Titley (Labour, UK) joined consultancy Hume Brophy. Titley, an authority with insider knowledge on EU foreign and security policy, served four terms as an MEP and was vice-president of the Socialist group. John Cushnahan (Fine Gael, Ireland) is known to lobby MEPs at the Parliament on the behalf of British American Tobacco. Cushnahan is apparently a regular visitor according to an assistant working in the Parliament who says she sees him "all the time". Cushnahan was an MEP for 10 years.

Meanwhile Erika Mann (Social Democrats, Germany) joined the Computer and Communications Industry Association in December 2009 as Executive Vice President, running their Brussels office. She had previously served on the parliamentary committee for industry, research and energy.

Then there are the MEPs who walk through the revolving doors more than once. Ernest Strasser, the MEP caught in the cash-for-amendments scandal, has been replaced by Hubert Pirker who is returning for his third time as MEP. Prior to replacing Strasser, Pirker was chief executive of his own consultancy firm, EU-Triconsult. The company has been recently dissolved.

EU-Triconsult openly promoted its close ties with the European Parliament, organising meetings for clients with decision makers in Brussels. To drive home the message, Pirker used the email signature: "Former Member of the European Parliament". The company also advertised that it specialised in organising contacts with South Korean representatives - Pirker spent almost four years in the Parliament’s ‘Delegation for relations with the Korean Peninsula’ while MEP. Today, he is on the Committee on Transport and Tourism.

It is unclear whether or not any of these MEPs were hired while still in Parliament. But it is not uncommon for MEPs to have second jobs. New research by Corporate Europe Observatory, LobbyControl and Spinwatch revealed that 35 per cent of MEPs from across 13 member states have second jobs or paid outside financial interests. As many as one in seven of these jobs could provoke a conflict of interest with their work as an MEP.

“Second jobs need to be looked at”, says Diana Wallis MEP, a member of the working group of 10 MEPs who are now looking to develop a code of conduct for Members after the recent Sunday Times exposé. “The issue is not the second job per se but whether such a job creates a conflict of interest, how you declare that, and how the situation is managed to create public trust in the system,” she added.
However, this revolving door is not limited exclusively to MEPs.

CEO was recently given access to documents that show how former Parliamentary staffers worked on behalf of big pharma in an attempt to influence the legislative process on the adverse effects of authorised medicines.

Every year, around 200,000 people die in Europe because of the dangerous side effects of medicines. Some of these deaths occur because drugs can be rushed onto the market without proper studies or thorough screening. Rofecoxib, an anti-inflammatory, has been linked to thousands of fatal heart attacks . It was authorised in 1999 but wasn’t withdrawn until 2004.

Legislators wanted to improve the labelling of drugs so that the public were better informed of any inherent dangers with medicines. As a result, some medical products, especially those with a new active substance, will now be identified by a black symbol and a statement that it is being monitored.

But during the passage of this legislation, while no one at the European Parliament explicitly argued against improving the safety of drugs, or against better labelling and patient access to information, there were attempts to weaken the wording of the warnings on the labels on the grounds that they could potentially frighten people.

Grossetête is MEP and also Regional Advisor (Conseillère régionale) for the Rhône-Alps region which is also home to Sanofi Aventis and global headquarters of its vaccine division, Sanofi Pasteur. Sanofi Aventis has invested over 300 million euros in the region since 2005.

Jérémy Michel was a Parliamentary assistant to Françoise Grossetête from October 2000 to October 2006. A month later, he became the Senior Manager for European Affairs at Sanofi Aventis – a position he still holds today. His partner, Géraldine Philibert was also a former Parliamentary assistant to Grossetête. Philibert still works in the European Parliament, but now as an EPP policy advisor and spearheaded the EPP’s position on adverse effects of medicines on behalf of the EPP’s shadow rapporteur Pilar Ayuso.

In the early hours of April 21 2010, Michel sent an email outlining Sanofi Aventis’ position and amendment proposal changes on the rapporteur’s draft legislation. This email has been seen by CEO. Later that same day (April 21), Philibert sent an email outlining the EPP’s position and proposed changes on the directive on the adverse effects of medicines and the regulation. CEO has obtained a copy of this email. According to a parliamentary source, who wishes to remain anonymous, the two positions were almost identical.

“In general EPP does not want to send a wrong and alarmist message to patients which might put at risk the treatment as decided by health professionals,” wrote Philibert adding that “the EPP cannot support the ‘intensive’ monitoring these words are considered as being not in adequacy with the objective. In a spirit of compromise, EPP suggest to replace them by ‘under observation’.”

While such parallels are not inherently unusual, the close relationship between two individuals, one lobbying on behalf of Sanofi Aventis, and the other heading a highly-relevant EPP policy initiative, raises obvious questions.

Grossetête does not appear to have been directly involved in these exchanges. Nonetheless, during a debate at the plenary session in Strasbourg in September she told lawmakers: “We must also take care not to frighten patients with excessive warnings; providing too much information could ultimately prove harmful.”

The recent cash-for-amendment scandal exposed a culture that blurs the lines between public and private interests. The parliamentary working group has been tasked to establish a code of conduct for MEPs and lobbyists is scheduled to present its results and recommendations on 21 June, including rules on the revolving door, with a vote most likely set near the end of the year. But how serious are these efforts and will they change anything?

In the United States, former Congressmen are barred from entering Congress if they become paid lobbyists. The US has also imposed a two-year cooling off period banning Congressmen from taking positions with private firms in areas they legislated on. The Buzek working group is discussing a similar restriction but one that “is adapted to a European model” according to a policy advisor working on the issue.

In other words, the group is taking its inspiration from what currently exists in other Member States. No Member State has the same level of restrictions against lobbying as in the US. Instead, the group wants to establish guidance and protocols but what this means for the revolving door is still not clear.

“The Parliament should offer members a lot more guidance when it comes to dealings with lobbyists and any potential conflict of interest situations. We need to look closely at MEPs who are also principal rapporteurs on co-decision legislation. We need to strengthen the code of conduct of MEPs,” MEP Wallis, a member of the group, said.

MEPs do not appear keen on imposing a two-year cooling-off period.

“I'm not in favour of a two-year cooling period. It is not necessary that MEPs are treated like Commissioners”, one MEP told CEO, explaining that not everything can be solved through regulation alone and that trust needs to be established between MEPs and the public.

But as former MEPs are entitled to a transitional allowance for up to two years after they leave office until they get another job, surely the Parliament should impose some restrictions on what ex-MEPs can do during this time?

In the meantime, former MEPs continue to enter the Parliament at will. Some of these individuals can be spotted sipping drinks at the Mickey Mouse bar on the Parliament’s third floor. They come to socialize and participate in events organised by the Former Members Association (FMA). The association “brings together former MEPs and avail [sic] of their experience and expertise” according to its site.

The FMA’s president is Pat Cox who was also the former President of the European Parliament. He certainly didn’t hesitate to become a lobbyist upon leaving the Parliament, working for Microsoft, Michelin, Pfizer and lobby consultancy APCO. He even had his own lobbying firm. At the same time, he also advised European Commissioner Meglena Kuneva in 2009 on “Communication and Strategy for Consumers on citizens”.

Indeed, this former president set an example that condones the excessive influence of corporate lobbying inside the EU's only elected institution. A practice that not only threatens to sideline the public interest but also distances the Parliament from the people it was elected to represent.