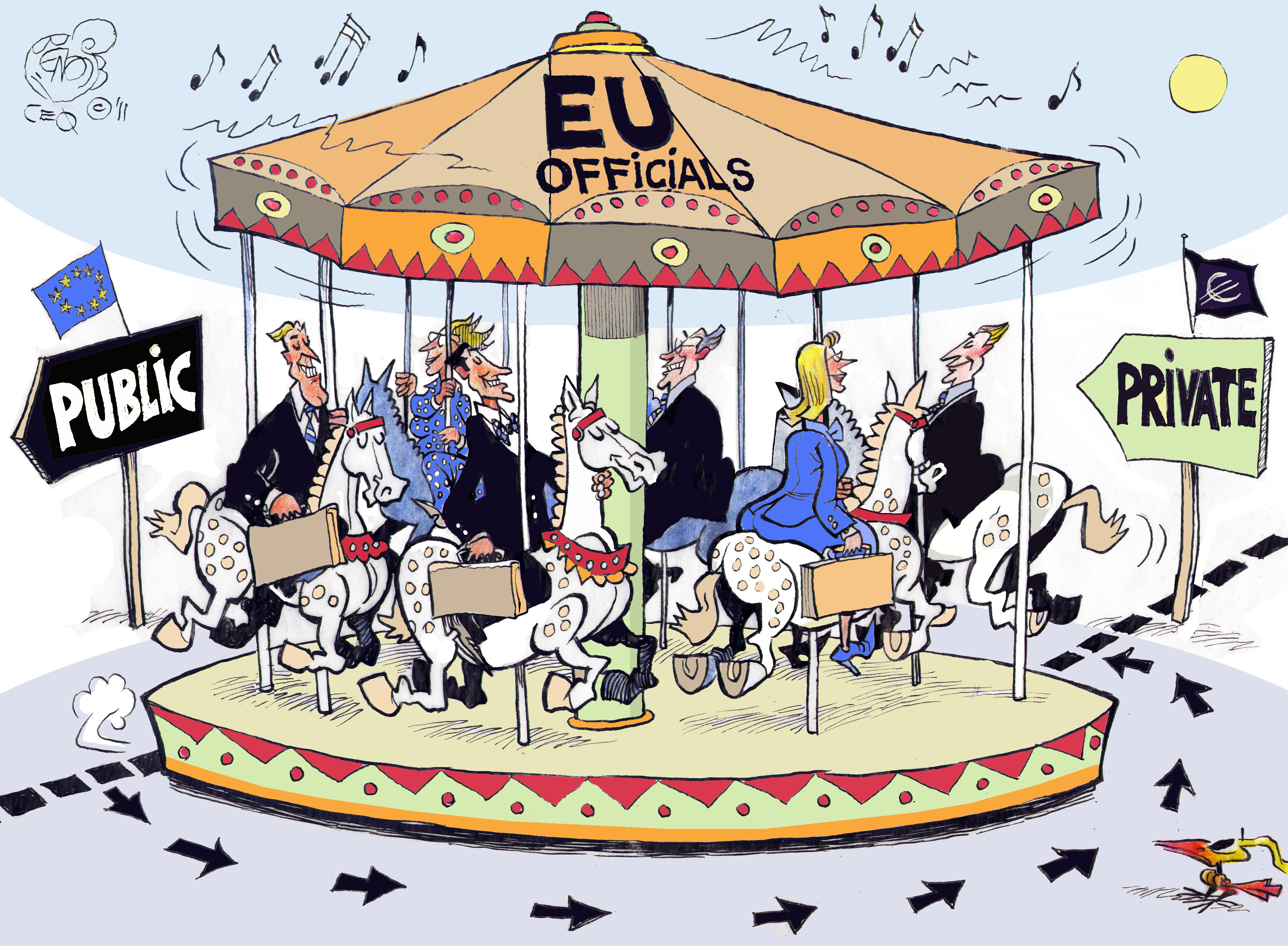 This new ALTER-EU report, Block the revolving door: why we need to stop EU officials becoming lobbyists, urges greater transparency and stricter rules to prevent Commission officials going through the revolving door into lucrative lobby jobs in the private sector.

As the Alliance for Lobbying Transparency and Ethics Regulation (ALTER-EU) highlighted in a report earlier this year, a number of former European Commissioners have recently gone through the revolving door;that is they have moved straight from public office into lobbying jobs. This raised serious questions about potential conflicts of interest.

The phenomenon of officials working in the EU institutions, especially in very senior policy-making or decision-making roles, also going straight into an industry or corporate lobby jobs is less well known. But it is not uncommon, with senior policy officials often moving to work on issues closely related to their former public role.

Such job moves create conflicts of interest, and allow officials to potentially abuse their inside knowledge of European decision-making and their access to former colleagues for the benefit of their new corporate employers or clients. There is also risk that the prospect of going through the revolving door could influence officials while in public office, leading them to act, not in the public interest, but in the interest of future employers or clients.

This report includes details of 15 cases of senior EU officials who have moved through the revolving door. The EU institutions have rules to govern the revolving door, but these are weak and are poorly implemented. In the cases documented in this report, many officials were allowed to move into lobbying jobs without any restrictions being imposed. In other instances, the rules appear to have been ignored entirely, until civil society groups and the media raised the cases. Overall, between January 2008 and July 2010, only one official was prevented from taking up a new position under the revolving door rules, out of 201 requests made.

The report details the following cases which raise particular concerns:
* Mogens Peter Carl was Director-General at DG Trade and then at DG Environment, until 2009. Just six months later, Carl became senior adviser to Kreab Gavin Andersen, one of Brussels’ biggest lobby consultancies which represents chemical producer ICI and vehicle company Scania, among others. The Commission did not impose any cooling-off period.

* Thomas Lönngren was Executive Director of the European Medicines Agency (EMA) until December 2010. In January 2011, he set up his own consultancy and joined the NDA group, which specialises in advising the pharmaceutical industry. EMA only imposed restrictions on Lönngren after NGOs complained about the conflicts of interest provoked by these new jobs.

* Derek Taylor was a senior energy adviser working for DG Energy who moved to lobbying consultancy Burson-Marsteller to work as an energy adviser within weeks of retiring from the Commission. Yet Taylor’s move was not authorised by the Commission at the time; permission only appears to have been sought retrospectively (in September 2011) after ALTER-EU raised the case with the Commission.

* In 2010, Mårten Westrup moved from DG Enterprise to BusinessEurope and lobbied former colleagues on climate change issues on behalf of BusinessEurope’s industry members. Yet under the current rules, his job move did not require approval from the Commission because of a loophole which excludes staff on contracts from systematically requiring authorisation. Westrup has now gone back through the revolving door and can be found working in DG Energy.

Brussels-based lobby firms actively recruit from among the ranks of European Union officials, allowing firms to bolster their prestige and claims of ‘insider access’, which can help their corporate clients achieve their EU policy objectives. Research by ALTER-EU shows that over half of the lobbyists at four well-known Brussels lobby consultancies have previous experience inside the EU institutions.

It is clear that this situation needs to change – and urgently. New rules need to be developed which properly protect the public interest. In relation to the revolving door this would require a mandatory cooling-off period, effectively banning all officials from moving into lobbying jobs, or any other job which provokes a conflict of interest for officials working for European institutions and agencies for at least two years. Other loopholes in the current rules should also be closed, such as the immunity of EU staff on (temporary) contracts from systematic consideration under the regulations, and the lack of vetting and monitoring of those who enter an EU institution from a lobby job.

The Commission is far too secretive and complacent about the revolving door, refusing repeated requests, including from MEPs and from ALTER-EU members, to pro-actively publish information about who has gone through the revolving door, or to retrospectively release information through access to documents requests. This needs to change as it is clear that external monitoring of the revolving door can only take place when there is full transparency.

As this report shows, the revolving door creates serious conflicts of interest, and undermines confidence in the probity and impartiality of decision-making in Brussels. Failure to fix the revolving door risks further undermining the independence and democratic legitimacy of the European institutions across EU member states. A review of parts of the staff regulations is already underway, led by Commissioner Maroš Šefčovič and is expected to be completed in 2012. It is imperative that the issue of the revolving door is properly considered as part of this review.

ALTER-EU urges the following changes to improve the rules:
* A mandatory cooling-off period of at least two years for all EU institution staff members entering lobbying or lobby advisory jobs, or any other job which provoke a conflict of interest with their work as an EU official

* A clear ban on any EU institution staff member undertaking a sabbatical which involves lobbying, providing lobbying advice, or which provokes a conflict of interest with their work as an EU official

* A clear ban on staff members starting new, external posts within two years of leaving an EU institution unless and until authorisation has been proactively given for the move

* The inclusion of a comprehensive definition of conflicts of interest

* Application to all staff working in the EU institutions (including those on contracts).

In addition, the EU institutions should scrutinise all staff joining their employment for potential conflicts of interest under revolving door rules. Such rules must serve to assess possible conflicts of interest that arise when a person employed by the EU institutions deals with matters which they have previously lobbied on, or which substantially affect the financial and/or commercial interests of former employers and clients. This should include: lobby consultancies, trade associations, think tanks and others. Where there is a potential conflict of interest, individuals must recuse themselves from such matters. All recusal agreements should be made publicly available online.

Improved processes should also be established and implemented which:
*  Introduce a high-profile, fair, rigorous and consistent procedure to implement the rules across the EU institutions. ALTER-EU considers that there should be independent oversight to monitor the implementation
of the revolving door rules
* Are backed up with adequate resources to allow revolving door cases to be investigated and monitored. The decision-makers must be allowed to make enquiries with the proposed employer of the official
* Ensure that sanctions are available to properly reinforce decisions
* Require the maintenance of an online list, on an ongoing basis, of all revolving door cases. The UK’s transparency system under the Advisory Committee on Business Appointments (ACOBA) may provide a
template here.