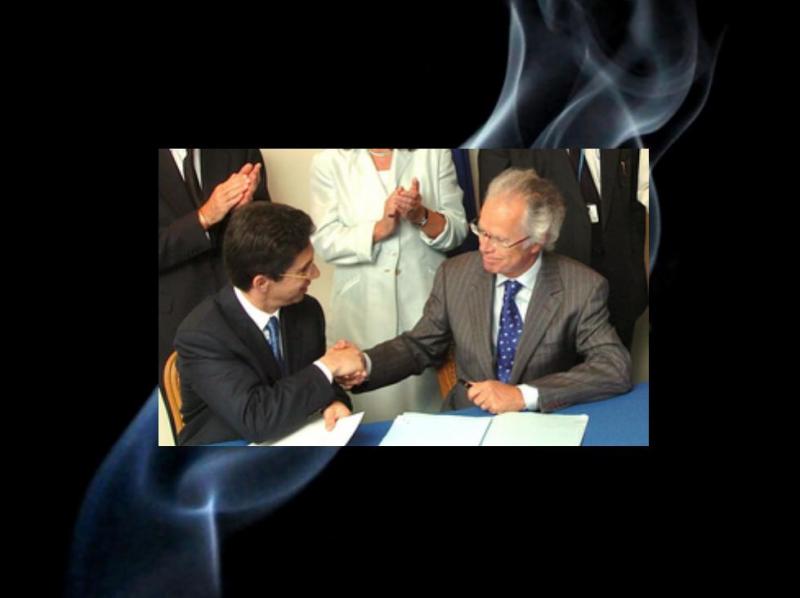 Why is the EU lagging in its political recognition of the revolving-door? A Petite problem

The longer term effects of the revolving door between public officials and private sector lobbyists have been graphically illustrated in the wake of the Dalligate lobby scandal, in the case of Michel Petite. Petite went through the revolving door five years ago, from head of the Commission's Legal Service to lawyer specialising in 'government relations' and EU public policy for a firm that provides EU-level lobbying services, with big corporate clients like tobacco giant Phillip Morris International and major banks ING and Crédit Agricole. Clients which clearly have enormous vested interest in EU policies and laws.

Petite's move was “scrutinised” by the Commission at the time, according to the revolving door rules in the Staff Regulations, resulting in a ban on intervening in any affair or dossier that the Legal Service had connection with whilst he was Director-General, and abstaining from any professional contact with former colleagues. For just one year. Yet nearly five years after his move, it came to light that Petite meets with former colleagues to present view on topics of deep interest to his corporate clients. Aside from the nutty Commission decision to hire a figure like Petite to advise in the Commission's ethical committee on the revolving-door, the case also indicates how the upper echelons of political power at the European Commission level still don't take the revolving-door, and its detrimental effects on public-interest policy making, seriously. The EU is lagging behind our neighbours across the Atlantic, in the U.S. and Canada, and the response that “things are different here” just doesn't cut the political mustard any more.

In Canada, recognition of the damaging links between lobbying, the revolving door and corporate capture led to special rules being incorporated into their lobbying laws. Canada's Lobbying Act is a mandatory lobby registration and reporting system, premised on two ideas: transparency and disclosure lead to public confidence and official accountability, and public office holders should know who is trying to influence them. An integral part of this is preventing conflicts of interests that arise through the revolving door. In their lobbyist registration, entities must not only identify themselves, their clients, and the areas they're lobbying on, but they must also list any former public offices held by lobbyists identified on their registration.

This would be an important step for the EU to ensure that risks of conflicts of interest are under public scrutiny. The EU's voluntary Transparency Register is currently facing its two year review, providing the perfect opportunity to begin the transition towards a mandatory system with far more stringent disclosure requirements. But ironically, the Transparency Register review is in danger of being hijacked by technocrats in a behind-closed-doors process, with the Commission hoping to get away with limiting it to technical issues. It is vital that space is allowed for political discussion, substantive review, and far-reaching change.

Beyond transparency, Canada's Lobbying Act is also far more advanced in its rules to govern post-political activity. Public officials are banned from lobbying for five years after leaving office. Breaching the ban leads to fines of up to $50 000, as well as public naming and shaming. Any exemptions to the ban must be made public, along with the reasons for the exemption. Comparing this system with the EU illustrates how far behind we're lagging – instead of a five year ban on lobby jobs, with exemptions requiring public justification, we have a two year period in which former officials must ask permission to take new jobs - including as lobbyists - which is almost always granted, and without any public records.

When it comes to comparisons with the United States, the Brussels bubble often has a knee-jerk reaction of “we're not like the U.S., it's different in Europe!” And in many areas this is not an unreasonable response. But where there are problems that exist on both sides of the Atlantic, this should not prevent us recognising things we can learn from, as well as things we can aim to avoid.

In the U.S., as in Canada, there is much higher-level political recognition of the revolving door problem. As U.S. transparency group Centre for Responsive Politics puts it, Washington D.C. is home to “a revolving door that shuffles former federal employees into jobs as lobbyists, consultants and strategists just as the door pulls former hired guns into government careers. While officials in the executive branch, Congress and senior congressional staffers spin in and out of the private and public sectors, so too does privilege, power, access and, of course, money.”

The symbiosis between high finance and government is also more visible in the U.S., with such great “interchange of personnel that it can be hard to tell where Goldman Sachs ends and the White House begins.” A recent study indicated the value of the revolving door by showing that share prices of U.S. lobby firms jump when they announce a former public official has been employed. People who know the system and how to work it are priceless when it comes to influencing laws.

Clearly the revolving door is a big problem, but greater recognition of this means they are at least trying to do something about. U.S. law - Title 18, Section 207 of the United States Code – includes a lifetime ban for high-level government officials on ‘switching sides’ to the private sector in the specific issues they were responsible for, and a two-year ban for a broader range of issues, with violations being subject to criminal and civil penalties. Since President Obama has been in office, the revolving door rules have been extended, with ‘reverse revolving door’ policies introduced to screen out conflicts of interest among new government appointees, and prevent special interests from “capturing” the agencies that regulate them. For example, the new policy bans the appointment of a lobbyist who has lobbied the same agency in the past two years. And these rules are starting to have effect – compared to the previous Bush administration, two years into which many political appointees were under FBI investigation for corruption, Obama's revolving door rules have avoided this situation.

But despite being much further advanced than EU recognition and regulation of the revolving door, there is still room and appetite for improvement. Currently, there are two bills proposed in Congress to block the revolving-door. The “Stop the Revolving Door in Washington Act” aims to further extend the post-employment restrictions on lobbying by Members of Congress and officers and employees of the legislative branch. And the “End the Congressional Revolving Door Act” intends to provide that a former Member of Congress or former Congressional employee who receives compensation as a lobbyist shall not be eligible for retirement benefits or certain other Federal benefits.

The pension issue hits a key nerve in the EU's revolving door debate. It is often argued that EU officials shouldn't face any limitation or restrictions on their career advancement, such as stopping them from becoming lobbyists, imposing a cooling-off period or restrictions on who, or on what, they can lobby. Ignoring for a moment that a private individual has no right to profit from knowledge gained in public service – it is not yours to sell – revolving door cases often concern public officials who reach retirement age, the end of their careers, and are provided with a very generous public pension. According to documents from the Commission, seen by CEO, the average pension paid in 2012, for all the EU institutions and agencies, was 4200 euros. The highest pension, presumably close to what high-level officials like Mr. Petite get after retiring from the Commission, was 9000 euros.

Looking at other ethics and transparency systems it becomes clear how topsy turvy the EU's approach to the revolving door is. As a result, there is a growing sense of political sleaze at the EU level, a perception of lawmakers turning lobbyists and former hired-guns being employed to make our laws. The head of human rights body the Council of Europe has said this month that "corruption is the biggest single threat to democracy in Europe today...[and] more and more people on our continent are losing faith in the rule of law". The Commission however seems to focus on a different concern. As Commissioner Šefčovič said last year, “we are competing in the job market for the brightest and the best that Europe has to offer... Many of the people we are looking to recruit are highly qualified and could earn far more as bankers, lawyers, economists or consultants in the private sector.”

Until the revolving door rules are tightened up, the impression is that the Commission is letting staff, who've “missed out” on private sector pay and perks, supplement their public pensions as lawyers and/or lobbyists, hiring out their EU expertise to private interests who want to influence EU law.

The Commission really doesn't see a problem. Not even a Petite problem.

* Picture: Michel Petite, as head of the EC's legal services,  signs the agreement to combat contraband and counterfeit cigarettes with Philip Morris International.