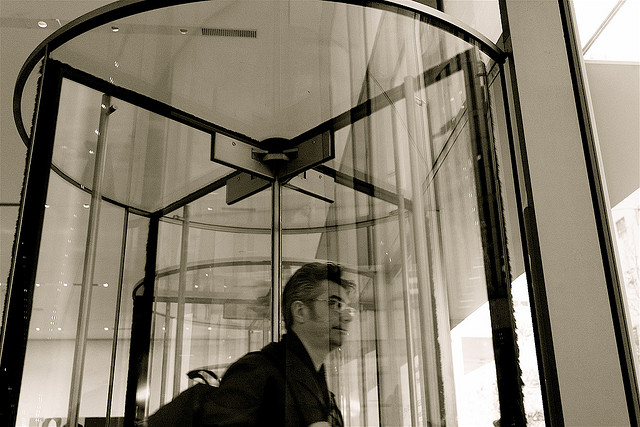 After months and months of delay on the review of the rules that govern EU insitution staff – the Staff Regulations – the Commission, Parliament and Council are now finalising the process known as trialogues, where they hash out agreement on the contentious issues and the finer details. It is in these final stages that, amongst the difficult issues of staff pay cuts and working hours, the importance of ensuring robust and far-reaching rules to govern conflicts of interest that arise through the revolving-door must be remembered.

The Staff Regulations, which govern the EU institution staff, contain some limited provisions on conflicts of interest, including from post-employment activities (Articles 11, 12 and 16). These do not however go far enough in preventing the risk of actual or apparent conflicts of interest that arise through the revolving door – when public officials leave office and go to work in private sector lobby jobs, often in the same areas they were responsible for when in office, or vice-versa. The revolving door enables privileged access and undue influence for corporate lobby groups, helping to blur the interests of the regulated with the regulator, and getting in the way of much needed progress in public-interest law-making.

CEO has documented many high-profile revolving door cases in the EU institutions, where these rules, or their implementation, have proved to be too weak or have failed to apply because of serious loopholes. Several groups from the Alliance for Lobbying Transparency and Ethics Regulation (ALTER-EU), including CEO, have taken the Commission to the European Ombudsman, who is now investigating its systemic failure to properly implement its own revolving door rules, including an analysis of all revolving door cases from the last three years.

We have also seen, in the last year, the far-reaching effects of the revolving door in Dalligate, the cash-for-access tobacco lobby scandal that led to the forced resignation of Commissioner John Dalli. Not only were Swedish Match's key lobbyist, and the unregistered lawyer they hired to lobby for them, both former EU institution staff (the former, after working at the Commission for 5 years, faced no screening for conflicts of interest or any restrictions when he became a tobacco lobbyist). But the man charged with advising on the revolving door for Commissioners - Michel Petite, as part of the ad hoc ethical committee - is the former head of the Commission's Legal Service, who now works as a lobbyist for a law firm that shuns the Transparency Register and has big tobacco clients.

All of these things give the impression that the EU institutions don't care about the impacts that revolving door type conflicts of interest can have on both public-interest policy making and on public trust in the EU.

However, the review of the Staff Regulations has offered a chance to change this. The Staff Regulations have been under review since December 2011 when the European Commission made a proposal for a revised text. The European Parliament's Legal Affairs (JURI) committee agreed, in spring 2012, on compromise amendments that go some way to strengthening the revolving door rules. These included introducing a specific duty on EU institutions to scrutinise all incoming officials and returning sabbaticals for conflicts of interest (Amendment 24). They also introduced a 12-month cooling-off period on officials leaving the EU institutions and wishing to take up lobby jobs in areas where they previously had responsibility, a ban on officials on sabbatical from engaging in any lobbying activity, and a requirement for the institutions to be more transparent about revolving door cases and how they handle them (Amendment 25). Whilst Corporate Europe Observatory believes that more is required, not least in guaranteeing the implementation of the rules, these provisions would nonetheless be positive steps. A positive step that would go some way to limiting the privileged access and undue influence that the revolving door gives to corporate lobby groups.

After a long delay, in part because of the difficult negotiations between member states about the EU's next seven year budget – the multi-annual financial framework (MFF) – the end is now in sight. The final trialogue meeting on the Staff Regulations is expected next Tuesday, 25 June 2013. After which the text will be submitted to the three Institutions for final decision, and formal agreement by the Parliament, Council and Commission.

So its now or never. This is the last moment for Members of the European Parliament (MEPs), particularly those who sit in the Legal Affairs (JURI) committee, to make sure that in amongst the difficult decisions on pay and working hours, the importance of a properly managed revolving door is not neglected in the new Staff Regulations. Corporate Europe Observatory today wrote to the JURI committee MEPs to reiterate the importance of provisions on conflicts of interest, and we hope that the coming weeks will bring good news for ALTER-EU's 'Block the revolving-door!' campaign.

First steps in the right direction...

...But much more still needs to be done. ALTER-EU believes that blocking the revolving door, and stopping the detrimental impacts that unmitigated conflicts of interest can have on public-interest decision making, requires:

For more information, check out the ALTER-EU Briefing: Review of revolving door rules in the Staff Regulations