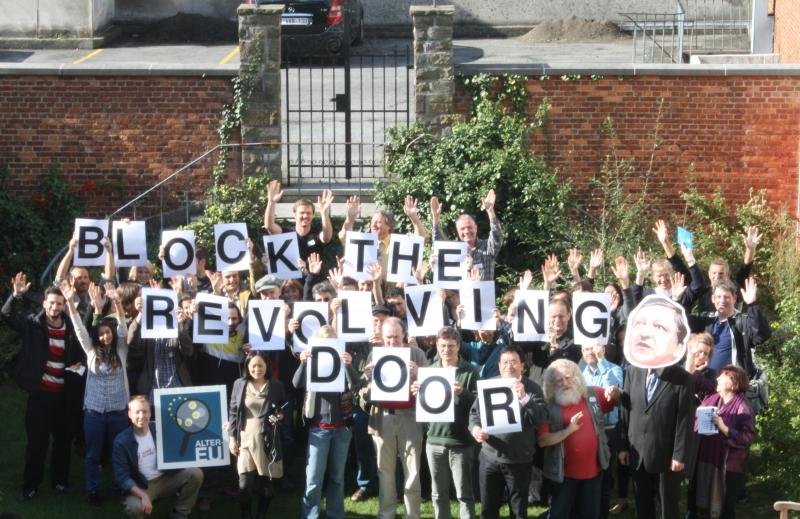 UK Liberal Democrats are spinning through the revolving door

The recent cases of former MEPs going through the revolving door, including a number of UK Liberal Democrats, has once again shown why the European Parliament needs to draw up new rules to tackle the risk of any possible conflicts of interest arising.

The recent European elections resulted in a major overhaul in the representation of the UK in the European Parliament. The electoral success of the heavily euro-sceptic UK Independence Party created losses for several UK parties, but it was the pro-European Liberal Democrats who suffered the biggest blow, losing all but one of their 11 seats in the European Parliament. The media called it “a near total wipe out”.

Seven months on, Corporate Europe Observatory (CEO) as part of its RevolvingDoorWatch project has highlighted the new careers of a number of former MEPs who have moved through the revolving doors into consultancy, lobbying or other high-profile jobs in the private sector. In many such cases, former MEPs have moved to jobs in the industry that they had previously been responsible for regulating. However, the lack of rules to cover the revolving door in the MEP code of conduct means that none of these moves have been scrutinised for possible conflicts of interest.

Former UK MEPs from the Labour Party (Arlene McCarthy and Peter Skinner) and from the Conservative Party (Martin Callanan) have taken new jobs which feature on RevolvingDoorWatch. However, the number of Liberal Democrats stands out: so far, we have reported the cases of Fiona Hall and Sharon Bowles; today we publish two further cases George Lyon and Graham Watson.

From the Parliament to external consultancy

Sir Graham Watson served as an MEP for 20 years before losing his seat in 2014. During his time in the European Parliament, Watson participated in several key committees. Nevertheless, he is better known for his influence within Liberal Democrat political circles, especially as he led the Liberal political group in the European Parliament from 2002 to 2009. He is currently the president of the ALDE party.

In October 2014, just a few months after losing his seat, Watson set up the public affairs company Bagehot Ltd. Two organisations have so far publicly announced having contracted Bagehot Ltd: the Government of Gibraltar and APCO Worldwide. When contacted by CEO, the ex-MEP explained that both have hired him as an external consultant via Bagehot Ltd and that they are charged on an hourly basis.

As an external consultant to APCO Worldwide, Watson will be joining the company's International Advisory Council (IAC) which, according to its website, gathers “90 recognized global leaders”, including former politicians, academics, journalists, diplomats and policy experts, to provide “clients invaluable real-world knowledge.” APCO Worldwide is one of the biggest PR companies in the world. Its current entry in the EU's Transparency Register lists over 30 clients and a total spending for EU activities in 2013 (most recent data available) between €1.5 and €1.99 million (incidentally representing a steep fall from its previous entry which listed an annual lobby turnover between €7.75 and €8 million). Watson did not disclose which clients he would advise via the IAC.

When asked by CEO, Watson did not fully reveal Bagehot's client list but stated that:

“Bagehot Ltd has carried out one-off projects for one of the 'big four' accountancy firms, for an environmental technology company and for an organisation representing local government interests. Bagehot Ltd is also retained on a longer term basis by a European federation of companies working in the field of health.”

“My role as a provider of strategic counsel involves essentially providing advice to my clients about who they might usefully approach and how. I have however applied for registration under the new transparency rules which may result in the grant of a lobbyist pass.”

At the time of publication (24 January 2015), Bagehot Ltd was not listed in the Transparency Register. (Update 26 February: Bagehot is now registered.)

From the agricultural committee to agri-business lobbying

George Lyon was elected to the European Parliament in 2009 and lost his seat in the 2014 elections. Having an extensive background in agricultural issues he quickly became a leading member of the agriculture and rural development committee (AGRI). He was AGRI's rapporteur on a number of dossiers, including the reform process of the Common Agriculture Policy (CAP) and the Commission's report on the possibility of allowing member states the right to ban or restrict genetically modified crops. He was often criticised by civil society organisations, including CEO, for his stances on GM technology.

The former MEP has now been recruited by Hume Brophy, a communications consultancy company, as senior consultant to its international agri-business group. The firm's entry in the Transparency Register discloses a lobby turnover of €2.5 million in 2013 (last data available) and GM giant Monsanto as one of its main agricultural clients.

In January, Lyon received heavy criticism from civil society after he published an opinion piece in a Scottish Daily demanding the EU introduce a more pro-GM policy. In the article, Lyon failed to disclose his new position as a lobbyist for international agri-businesses which led a media outlet to label him 'GM George'.

His appointment is particularly shocking as it was followed by Hume Brophy's public announcement of a new “parliamentary team”, composed of Lyon, Gary Titley and Brian Simpson. Illustrating the added value that ex-MEPs represent to lobbying firms, John Hume, founding partner of Hume Brophy, commented that:

“Our team of full time consultants have strong institutional links and experience across Brussels and member states. They are also able to draw on our teams in London, Dublin, Paris and Singapore, but nothing can substitute actual parliamentary experience to guide our partners though the often difficult challenges of seeking support from the European Parliament.”

“Our Parliamentary team is the largest and strongest in Brussels. Each of our former MEPs have held high office and understand intimately how the institution [EP] works. We have made a conscious decision to invest in parliament relations in this mandate because we believe it will play a much bigger role than ever before.”

CEO contacted Lyon prior to publishing this article but he did not reply to our questions. His full RevolvingDoorWatch profile can be read here.

The code of conduct for MEPs (approved in 2011) states that “Former Members of the European Parliament who engage in professional lobbying or representational activities directly linked to the European Union decision-making process may not, throughout the period in which they engage in those activities, benefit from the facilities granted to former Members under the rules laid down by the Bureau to that effect”. However, there is no process to monitor or enforce this part of the code and ensure that former MEPs do not use their lifelong access pass for lobbying purposes. When MEPs leave the European parliament they are entitled to a transitional allowance equivalent to one month's salary for every year they have been an MEP, with a minimum pay-out of six months' salary and a maximum of 24 months.

The number of UK Liberal Democrats involved in recent revolving door cases raises questions as to the party's approach towards the regulation of the revolving door. However, experience shows that this a cross-party problem. The current European Parliament's code of conduct is not strong enough to prevent possible conflicts of interest from arising when ex-MEPs go through the revolving door and urgent reform is essential.