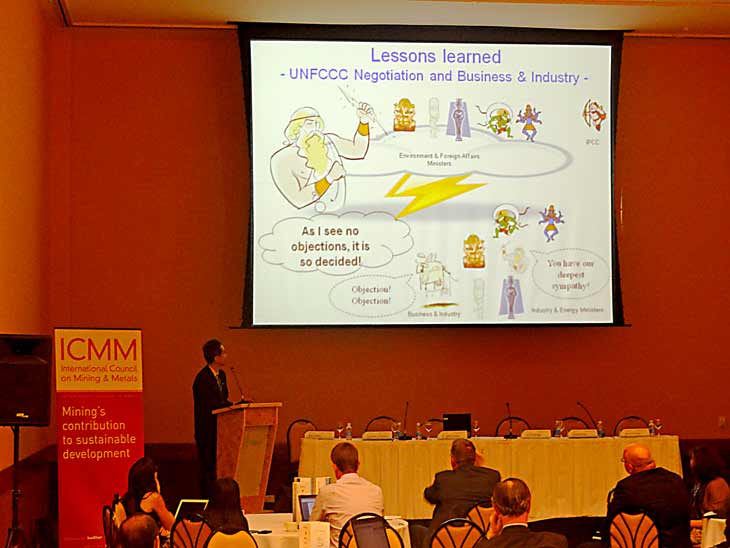 Big business is out in full force at the Rio+20 summit. At Business Day during Rio+20, Louise Kantrow of the International Chamber of Commerce received thunderous applause when she highlighted that they were part of “the largest business delegation ever to attend a UN conference”. “Business needs to take the lead and we are taking the lead,” she added.

Encouraged by the recognition of the role of the private sector in the Rio+20 summit declaration, business lobbies feel the time has come to claim a stronger more formal role in the UN system. Calls to boost the industry role in UN negotiations have been gaining momentum in the last few years, including demands for an expanded formal business role in UN climate talks.

At the Business Day at Rio+20, this was a recurring theme and there was a whole session dedicated to the question. John Drexhage from global mining lobby group ICMM opened the session with the question: ”What are governance implications of a bigger role for business?” Drexhage explained that the UN secretariat had expressed support for a bigger role for industry at UN talks and he invited the panelists to suggest concrete measures to implement this.

Since the first Rio summit industry has had a formal role in UN talks as one of nine 'Major Groups', but the feeling is now that this is too limited. The session explored different models such as the OECD’s Business Advisory Council (BIAC) or the ILO’s tripartite model (with the trade unions as the other partner), both of which give industry a stronger formal role than is currently the case in the UN system.

While industry plans to solidify its formal powers in the UN system, there is also a growing outcry about the far-reaching informal corporate influence. More than 400 civil society organizations representing millions of people from around the world signed a statement denouncing the close links between UN agencies and industry.1 The statement - initiated by Friends of the Earth International and nine other organizations – will be delivered to UN Secretary-General Ban Ki-moon on Friday. A new report on these issues stresses that the independence of UN agencies is undermined by their many partnerships with large corporations and the agencies are moreover increasingly financially dependent on the private sector.2

At the Business Day, Brent Wilton of the International Organisation of Employers explained that the International Labour Organisation (ILO) is eager to form a partnership with business, because government funding for the ILO is drying up. He argued that business should be selective in which ILO activities they fund. “The ILO is trying engage business in funding activities that go beyond business interests, like work on labour laws,” Wilson said, warning business to “be careful to be dragged into UN-driven agenda”. Wilson’s statements very clearly highlight the dangers of UN agencies becoming dependent on private sector funding: anything that does not match the corporate agenda will not be funded.