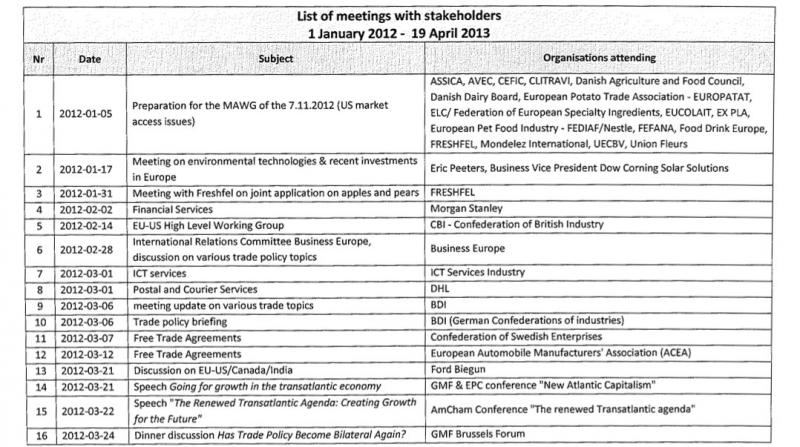 In response to an access to documents request from Corporate Europe Observatory, the European Commission has released a list of 130 ‘meetings with stakeholders’ on the EU-US free trade talks. At least 119 meetings were with large corporations and their lobby groups. This means that more than 93% of the Commission’s meetings with stakeholders during the preparations of the negotiations were with big business. The list of meetings reveals that, in addition to the civil society dialogue meetings reported on the DG Trade website, there is a parallel world of a very large number of intimate meetings with big business lobbyists behind closed doors - and these are not disclosed online.

Negotiations on an EU-US ‘free trade’ agreement (Transatlantic Trade and Investment Partnership, TTIP) started in July this year amid strong controversy and public concern about the impacts such an agreement could have on environmental regulations, food standards, data protection and other issues. The European Commission, which represents the EU in the negotiations, has reacted with a propaganda offensive that includes a Q&A website full of misleading claims about the TTIP talks and a ‘@EU_TTIP_team’ that counters critical messages on twitter. In mid-July, the Commission made a huge deal out of the civil society dialogue it had organised in Brussels on the TTIP talks, posting dozens of tweets about the event, praising the “interesting discussion” on issues such as “the environment, transparency, development” with “as many questions from NGOs [...] than there were from Industry”.

The event also features prominently on the website of the Commission’s trade department (DG Trade), in the ‘Dialogues’ section where the Commission states that it aims for “a transparent and accountable trade policy based on consultations with all parts of European civil society”. But what is disclosed on the website is only a tiny part of the meetings that DG Trade has with ‘stakeholders’.

In April, Corporate Europe Observatory submitted an access to documents request in order to get an overview of the Commission’s contacts with industry, in the context of the preparations for the EU-US trade talks. The Commission’s first response was to ask us to "narrow down the scope” of the request, because it "concerns a very large number of documents". Three months later the first result arrived: a list of 130 ‘meetings with stakeholders’ that took place between January 2012 and April 2013.1 A few weeks later another five meetings were added to this list. DG Trade has informed us that the minutes and other reports of these 135 meetings, as well as correspondence between DG trade and industry lobbies, will be released later, but that they “cannot yet commit to a specific date”.

Eight of the 135 events in the list are of Commission officials giving speeches at different events. Of the remaining 127 meetings, which took place behind closed doors and in parallel to the Commission’s official consultation fora, there are only a handful of encounters with trade unions and NGOs, while at least 119 meetings were with large corporations and their lobby groups. This means that 93% of the Commission’s meetings with stakeholders during the preparations of the EU-US free trade talks were with big business! The most frequent guests at DG Trade were BusinessEurope and car industry lobby ACEA (each nine meetings), the US Chamber of Commerce, Digital Europe, the European Services Forum and the Transatlantic Business Council (previously known as the Transatlantic Business Dialogue, TABD). There were also numerous meetings with the arms industry, banking, medical technology, food, pharma and chemical lobbies.

The list of meetings reveals that, in addition to the civil society dialogue meetings reported on the DG Trade website, there is a parallel world of a very large number of intimate meetings with big business lobbyists behind closed doors - and these are not disclosed online. These meetings, moreover, were about the EU’s preparations of the trade talks, whereas the official civil society consultation was merely an information session after the talks were launched. The Commission’s rhetoric about transparency and about consulting industry and NGOs on an equal basis is misleading and gives entirely the wrong impression of DG Trade’s relations with stakeholders.

It is high time the European Commission embraced a policy of pro-active lobby transparency by posting lists of all meetings with lobbyists on its website. This would be a crucial step towards securing citizens’ right to know who influences EU policy. It would also save a lot of time and energy for the many watchdogs, journalists and others who must resort to access-to-documents requests, as well as for the Commission itself in replying to them. The UK Government has been doing this for several years: a list of meetings with lobbyists is made available per government department, updated quarterly.

Industry-dominated advisory group in the making?

Beyond securing transparency, the Commission’s bias towards big business interests must be challenged. An important test case might arise in the coming weeks. At the civil society dialogue in July, the Commission stated that it is looking into "the possibility of setting up a group of expert advisors, who would have access to more detailed information along the line of the current practice in the US". The Commission’s current habits however give reason to fear that this advisory group will be highly unbalanced. In the EU’s market access working groups, Commission officials and EU member state representatives sit together with corporate lobbyists to discuss regulations in overseas markets that stand in their way – and develop joint strategies to get rid of them. Industry praises these meetings as a way to make the Commission “adopt the company perspective” and “speak company language”. There is not a single non-business, civil society or trade union representative on these advisory groups. (See section 3.2 in our report Trade Invaders).

The Commission’s reference to “current practice in the US” is also not exactly comforting. According to Craig Holman of Public Citizen, trade advisory panels in the US are “skewed heavily in favour of industry”. No less than “84 per cent of these ‘advisors’ exclusively represent corporations (including pharmaceutical giants like Abbott, agribusiness behemoths like Cargill, and private equity firms like Capital Partners) or industry associations”.2

The new Commission advisory group should clearly not be modeled after “the current practice in the US” nor after the EU’s market access groups. Considering what is at stake in the EU-US trade talks, it is time for a new, transparent and inclusive approach that fully involves environment, consumer and public health NGOs, trade unions and independent experts. Anything else would further undermine the credibility of the Commission as the EU’s voice in international trade negotiations.

I know someone who is working for a charitable NGO in a third world country. he tells me that the EU is extremely difficult to deal with. They decide how something should be done before they understand the problem and then they set a series of rules, but their officials ignore all the rules, leading to an unworkable situation.

I was surprised to hear this because I had the impression that the EU was very much in favour of sticking rigidly to a set of rules. Thus, while I abhor the story you tell about the imbalance between corporate lobbyists and the ordinary people in the EU, I can see that the corporate people may also have a problem in dealing with the EU and they might need to make the effort to teach the EU bureaucrats how to interact effectively.

Please understand I have no sympathy with the corporate dominance but when information reaches me about EU inefficiency I have to sympathise with that specific problem.