What are you hiding? The opacity of the EU-US trade talks

While Commissioner De Gucht claims that “there is nothing secret” about the ongoing EU-US trade talks, notes of Commission meetings with business lobbyists released to Corporate Europe Observatory under the EU’s freedom of information law were heavily censored. The documents show that De Gucht's officials invited industry to submit wishlists for 'regulatory barriers' they would like removed during the negotiations, but there is no way for the public to know how the EU has incorporated this into its negotiating position – or even what has been asked for and by whom – as all references have been removed.

Last month Corporate Europe Observatory received 44 documents about the European Commission's meetings with industry lobbyists as part of preparations for the EU-US trade talks (the Transatlantic Trade and Investment Partnership, TTIP). Most of the documents, released as a result of a freedom of information (FOI) request, are meeting reports prepared by Commission officials. The release of these documents might sound like a generous act of transparency on the side of the Commission, but that is hardly the case. The documents arrived almost ten months after the FOI request was tabled and 39 of the 44 documents are heavily censored.1 The 44 documents cover only a fraction of the more than 100 meetings which De Gucht's officials had with industry lobbyists in the run-up to the launch of the TTIP negotiations.2 Were no notes taken during closed-door meetings with corporate lobbyists from, for example, the US Chamber of Commerce, the German industry federation BDI, chemical lobby groups CEFIC and VCI, pharmaceutical industry coalition EFPIA, DigitalEurope, the Transatlantic Business Council, arms industry lobby ASD, the British Bankers Association, and corporations like Lilly, Citi and BMW? Corporate Europe Observatory has complained to the European Commission's top civil servant Catherine Day and demanded the full release of all documents related to meetings with lobbyists on TTIP.

In the 39 documents which were “partially released”, DG Trade has removed large parts of text (“non releasable” or “not relevant”), either 'whitening' or 'blackening' the parts it wants to keep from public scrutiny. In some cases, like a meeting with lobbyists from Fertilizers Europe, every single word has been removed from the document. The arguments used to justify this secrecy are highly flawed. In many documents, sentences or paragraphs have been removed “as they contain information related to the EU's negotiating position in the EU/US trade negotiations.”3 The Commission argues that “release of that information would have a negative impact on the EU's ability to conduct the negotiations".2 European Commissioner De Gucht in December 2013 in a letter published in The Guardian argued that “there is nothing secret about this EU trade deal” and that “our negotiations over the Transatlantic Trade and Investment Partnership are fully open to scrutiny”. This is blatantly untrue. Not only is the text of the EU's negotiating position secret, the public is even denied access to sentences in meeting reports that refer to the EU negotiating position. This is especially problematic as these are minutes from meetings with industry lobbyists who were clearly given information about the EU's negotiating position in the TTIP talks, unlike the public. Sharing information about the EU's negotiating position with industry while refusing civil society access to that same information is unacceptable discrimination. 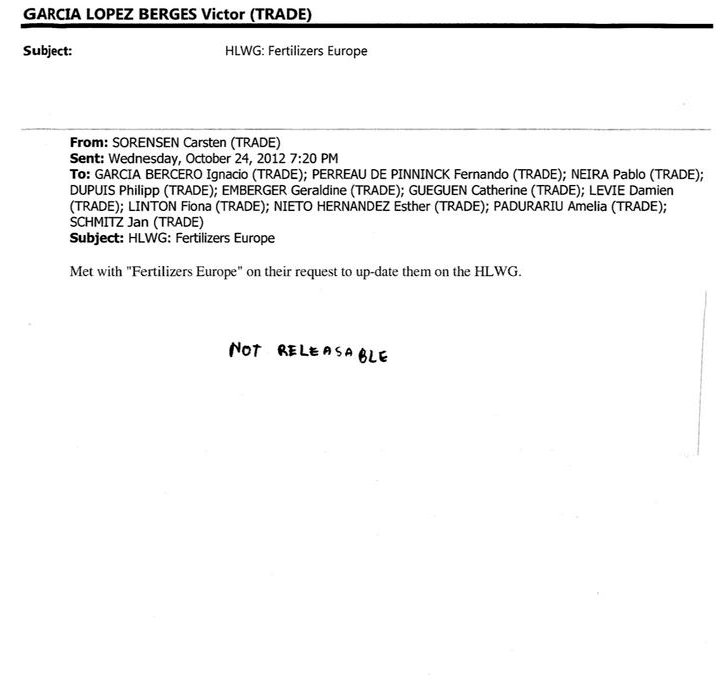 In many cases parts of text are removed because they contain the views of industry lobby groups “on particular aspects of the EU/US trade negotiations.” “Release of that information could have a negative impact on the position of the industry", the Commission argues. It is entirely unclear what is meant by “negative impact on the position of the industry” and why the views of the lobby groups should be hidden from public scrutiny. One example is the minutes from a meeting in April 2013 with the US Chamber of Commerce, the wealthiest of all US corporate lobbies, with strong links to the Republican Party. In our complaint to Catherine Day, we have asked the Commission to explain why on earth the views on TTIP of this US industry lobby group presented in conversations with DG Trade cannot be released.

The Commission has also removed all names of lobbyists from the 44 documents arguing that “disclosure would undermine the protection of […] privacy and the integrity of the individual”. This is an absurd line of argument as these are professional lobbyists who are not acting in an individual capacity. There is clear public interest in transparency around who is lobbying on whose behalf and who is getting access to EU decision-makers.

While the texts have generally been too heavily censored to reveal much of substance, they do throw some light on the Commission's close partnership with big business lobby groups in the TTIP talks. When preparing the TTIP negotiations during 2010-2013, the Commission has very actively approached corporations and their lobby groups to seek guidance and close cooperation.

Despite being heavily censored, the documents show clearly that removing differences in EU and US regulations is the key issue in the TTIP talks, with 'regulatory barriers' coming up in a large majority of the meetings. For example, in a meeting with the European Services Forum in February 2013, a lobby group for global service players such as Deutsche Bank, IBM and Vodafone, the Commission suggested various options for regulatory cooperation such as 'compatibility', 'mutual recognition' and 'equivalence'. “Industry must play an important part here as well, in suggesting areas where regulators should focus their efforts in order to bring greatest benefits to industry”, the Commission representative stressed. Judging from the released documents, 'equivalence' seems to have been the Commission's preferred option at the time, meaning that the EU and US would consider their regulations to be of equivalent and thus acceptable standard. This would mean that US firms could follow US regulations when exporting to and investing in Europe.

In another meeting in February 2013, BusinessEurope (the most powerful business lobby in Brussels), stressed “its willingness to play an active role in the upcoming negotiations, in particular on the regulatory front”. The Commission noted the importance of EU industry “submitting detailed 'Transatlantic' proposals to tackle regulatory barriers”. Industry highlighted “how to include in the final deal not only regulatory convergence but also avoid regulatory divergence”. The Commission representative thanked BusinessEurope for the “very useful inputs and contributions”, adding that “I hope I can continue to count on your input and support throughout the negotiations”.

'Regulatory cooperation' is one of the most worrying elements in the TTIP talks, with serious repercussions long after a deal will have been completed. A leaked EU document from the winter of 2013 shows the Commission proposing a EU-US Regulatory Cooperation Council, a permanent structure to be created as part of the TTIP deal.4 Existing and future EU regulation will then have to go through a series of investigations, dialogues and negotiations in this Council. This would move decisions on regulations into a technocratic sphere, away from democratic scrutiny. Also, there would be compulsory impact assessments for proposed regulation, which will be checked for their potential impact on trade (instead of, for example, whether they protect people’s health or are good for the environment). This would be an ideal scenario for big business lobbies, creating a firm brake on any new progressive regulation in the very first stage of decision-making.

The negotiations on regulatory issues is one of many areas where there are very serious and justified concerns about the impacts of TTIP on environment and consumer protection standards. Ending the secrecy around the negotiations is crucial for allowing citizens to assess what is being negotiated in their name. This transparency should include the EU's negotiating position, and also shed a clear light on the involvement of corporate lobbyists in preparing the negotiations.

lack of participatory governance (democracy) has led to crushing of the 80% backbone of countries' economics: I mean the small & middle size entrepreneurs that have disappeared because of un-paralleled and un-ruled rise of oligarchies ... like in Ukraine & others !

the feeling emerging from this will led to revolution... like in Ukraine & take care !

Trying to circumvent national law by secret treaties & corporate courts is the equivalent to treason.

Why is Treason negotiable without prosecution?! WTF?!?

'tis a complex and destructive story, quite incomprehensible from say, Mars. The empires may eventually succeed in crushing the real economy. As the Indians say (originally about the white man):"Only when the last tree has died and the last river been poisoned and the last fish been caught will he realize he cannot eat money."