Citizens turn up the volume on troubled TTIP negotiations

March 10-14th saw the latest round of the highly controversial EU-US free trade negotiations take place in Brussels. But while the industry's 50 leading CEO's, known collectively as the European Roundtable of Industrialists, proclaimed it their responsibility to ensure the deal was passed 'with as little noise as possible', citizens from both sides of the Atlantic had other, rather noisy (and sometimes milky) ideas for the Belgian capital.

The Transatlantic Trade and Investment Partnership, or TTIP, has been billed as the greatest, most far-reaching trade deal the world has ever seen, and according to the European Commissioner for Trade, Belgian Karel De Gucht, it is supposed to deliver jobs and growth and pull the EU out of the ongoing economic crisis. However, even his own department's research has shown this is not the case (watch the awkward silence as De Gucht is confronted with the evidence - below at 06:25-07:06).

Groups on both sides of the Atlantic have come out against the free-trade deal, not just because it will weaken social, environmental and economic safeguards but also because it's being negotiated in secret between governments and corporations. Negotiating documents, stakeholder contributions, agendas and minutes of meetings with industry – none of these are public. Citizens are being left in the dark, relying on leaks for information.

That's why, on the morning of Thursday 13th March, hundreds of people gathered outside De Gucht's office – DG Trade in Brussels – with a clear message: STOP TTIP! Called by the D19-20 Alliance – alongside Alter Summit, Seattle to Brussels, the European ATTAC Network and Blockupy – the protest rally had speakers including US trade union Teamsters, President of Belgian trade union MOC, and farmers from both sides of the Atlantic, including Luc Holland from the Belgian Milk Producers Association (MIG). The story is the same in the US as Europe: TTIP will make farmers compete against each other in a race to the bottom in terms of environmental, health and animal welfare standards. While the EU currently bans chlorine-rinsed chickens, hormone-filled beef or genetically modified organisms, the US wants TTIP to 'harmonise' standards downwards allowing them in. Likewise, the increased competition and low standards drive out small farmers who want to grow healthy food. This is why, at the end of the action, DG Trade found itself covered in milk provided by farmers within D19-20, highlighting the attack on their ability to make a decent living by producing good quality produce. Despite trying to originally ban the protest from happening due to 'orders from above' (rumour has it a call from the Commission), the police remained calm. 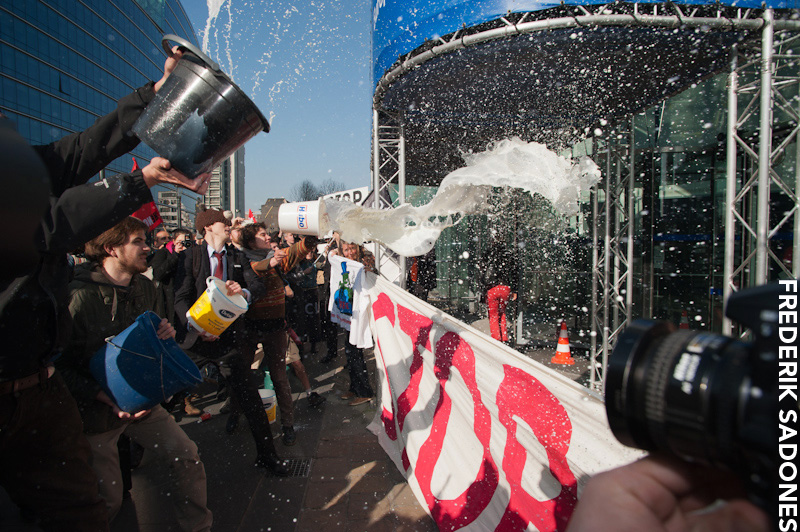 Commission feeling the heat – and reacting

Those gathered were not only heard in the metaphorical sense, but also literally – following demands of the citizens gathered outside the Trade Commissioner's office, De Gucht's head of cabinet came down and met protestors on his behlaf. Another meeting will follow, but it shows that the pressure on the Commission is working and they are being forced to face the public. Noise around the TTIP talks is definitely growing – not just from protests like these, but from all angles. The same week saw a series of conferences and media events on the topic, as well as the two biggest Belgian trade unions, CSC and FGTB, categorically rejecting the treaty. Meanwhile in Germany, the metal workers' trade union has taken a similar stance and the national government has come out against the 'investor-to-state dispute settlement' (ISDS) system – secret arbitration panels where corporations can sue national governments if they feel their future profits are affected by public-interest policy making, such as a national ban on fracking.

However, while citizens were calling for an end to TTIP and the close relationship between corporations and our policy makers, the EU lead negotiator Ignacio Garcia Bercero and members of his team were enjoying lunch with the Transatlantic Business Council (TABC – made up of the biggest corporate names in Brussels). The night before, Bercero was also the key speaker at a cocktail party organised by the American Chamber of Commerce. Both groups are also keen advocates of austerity policies and increased privatisation across Europe, seeing TTIP as another tool to increase the power of big business while lowering social and environmental standards. Yet policy makers acting on our behalf engage with them in secret meetings and are taken out to lunch and dinner? In whose interest do they act? 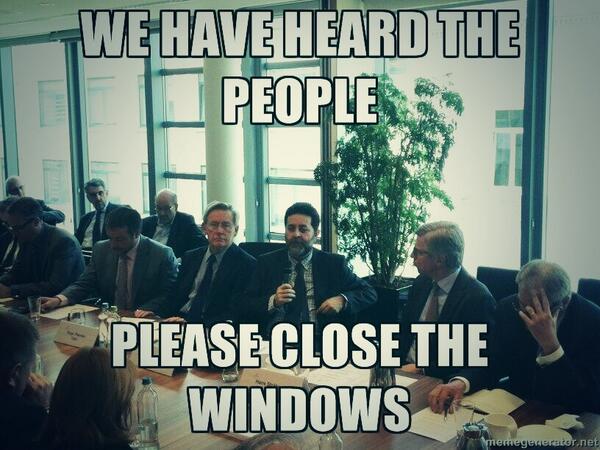 The fight against TTIP – like the fight against austerity – will keep growing in force, as it is resisted on all fronts. D19-20 will be taking the fight directly to Karel De Gucht, the European Commission and our national leaders, as will other movements here in Belgium like the Acteurs des Temps Présents and Alter Summit (Belgium).

Next citizens action to reclaim democracy

The next big fight back in Brussels against corporate-driven free-trade and austerity will be on May 15th as part of a European Week of Action. The European Business Summit - “where Business and Politics Shape the Future” - will be surrounded from 7am, with thousands of us making the message to Karel De Gucht and his cohorts clear: our world is not for sale, no to austerity, no to TTIP. Big business lobbies may want to buy and sell democracy as quietly as possible but the volume is being turned up and it's not going down until we win.

Many thanks and thumbs up for
Good Action!

Many thanks and thumbs up for the protest!

I really would like to know, if De Gucht's head of cabinet came down to met protestors after the 'milk'-attac? This would be really surprising to me, because I could not image an Eurocrat willing to talk to protestors after such a form of protest.

I invite you to read the article of Susan George and Françoise Castex, appeared in médiapart concerning the liberal headlong rush resulting from the TTIP : http://blogs.mediapart.fr/edition/les-invites-de-mediapart/article/2603…