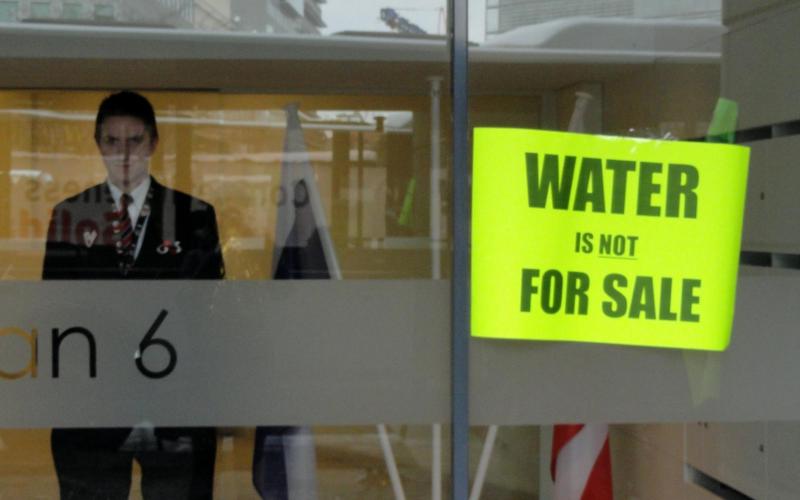 The European Commission has in recent weeks gone on a PR offensive in response to growing criticism of its pro-privatisation agenda for the water sector. The criticism centres around the water privatisation conditions attached to the Troika’s rescue packages for Greece and Portugal, and the proposed EU concessions directive, which could lead to increased privatisation pressure on public water municipalities across Europe.

The concessions directive, which has the stated object of opening markets and eliminating “discrepancies among national regimes”, would end the exemption that has so far existed for drinking water supply and for the first time bring it under the rules of the EU’s single market. Previous attempts to bring water under single market rules failed due to resistance from civil society and MEPs opposed to water becoming a commodity, but this time the European Parliament has been less vigilant. The directive would not directly force municipalities to privatise, but could lead to 'privatisation through the back door'. Municipalities who have some form of private participation in their water supply, even a small part, would have to offer their water contracts for EU-wide bidding. This would give private water multinationals like Suez and Veolia new opportunities to expand. All of this has sparked strong public concern in Germany, Austria, The Netherlands and elsewhere. The concerns were shared from left to right and even the governing German conservative party, the CDU, passed a resolution at its congress rejecting the concessions directive and calling for water to be exempted. German Chancellor Merkel however, has so far ignored these concerns. The concessions directive is currently in its last phase of decision-making, a so-called trialogue procedure involving the Commission, Parliament and the Council of EU member states.

The Commission got increasingly worried after its water privatisation push was featured in widely watched TV programs in Germany and The Netherlands. Before the European Parliament's vote on the directive in January, Internal Market Commissioner Barnier had accused opponents of ”misinformation” and of a “deliberately erroneous reading” of the proposed directive. In February, the attacks against the critics were complemented by a charm offensive. Barnier and Environment Commissioner Potocnik issued a joint press release, stating that the Commission “does not have a policy of forcing Member States to privatise water services.” The Commissioners claimed that the concessions directive will “not lead, under any circumstances, to imposed privatisation of water services.”

But this was a clever way to sidestep criticism, which did not speak about direct “imposed” privatisation but about a very dangerous first move in that direction, a charge which remains unanswered. Later in February, Commissioner Barnier announced in interviews in German and Austrian newspapers that he is willing to change the directive on specific points of concern for the water sectors of these two countries. Concretely he offered to change a clause in the directive that would see a smaller number of water utilities covered by the directive. This, obviously, implicitly means that Barnier admits that there are indeed reasons to fear that the concessions directive could lead to privatisation through the backdoor.

But Barnier’s offer for a limited amendment to the directive is far too little to make a real difference. The German TV program Monitor last week looked at the case of the city of Karlsruhe, which has publicly supplied water with limited private participation. Also after the changes announced by Barnier, Karlsruhe would have to offer its water supply concession for EU-wide bidding, Matthias Maier of Stadtwerke Karlsruhe told Monitor. “Privatisation would endanger the quality of the water and surpluses would no longer be reinvested in the water supply system but go to shareholders of the water multinationals”, Matthias Maier explained. Green MEP Heidi Ruhle told Monitor that “Barnier’s proposal is nothing new. It is a smokescreen to comfort public opinion”. The goal of the directive, she stressed, remains the same: “market opening and increased pressure towards privatisation”.

Barnier’s statements have failed to impress civil society groups, who continue to campaign for water to be exempted from the concessions directive. This is indeed the only effective way to prevent the directive leading to privatisation pressures. Over 1,3 million people have now signed the European Citizens Initiative for water as a human right, which explicitly calls for “water supply and management of water resources not to be subject to ‘internal market rules’ and "that water services are excluded from liberalisation”. The only way to respect the wish of EU citizens would be to put the Concessions Directive on halt or agree to exempt water from the directive. The battle over the concessions directive is therefore a major test case for democracy in Europe.

Alpe Adria Green international non-governmental organization is in full agreement with the above. And we are in this fight in South East Europe and Italy.